I just had to start this thread because this movie is EPIC! If you haven't seen it go see it the movie ROCKS! It takes you to a world you've never seen before in the comic world. I'm kind of burned out on comic movies this movie changed all that. The movie has a lot of takeaways from Tron. Imagine putting Tron underwater I think that was what the film makers asked themselves.

When you think of DC there needs to be a DC pinball big league. Stern has been pumping out Marvel pins I think we're ready for something other than Spider-Man, Batman lets get an Aquaman Pinball.

Who's up for an Aquaman pinball?

Rank your DC Hero's in need of a pinball...

Kinda would be a modern day Fathom. Kinda

Good Point!!! If you go see the movie and check out how much art went into the the movie, plus all the creatures, you'll be like yeah pinball all day long.

Dude, this is my ultimate pin. I haven't seen the new movie yet, but Aquaman is my dream theme for a pin. Ocean-themed pins are always popular. DC doesn't get enough love in the pinball world. An Aquaman pin would be EPIC! I've been pounding the table for it for months. If this happens, I'm first on line.

Been fooled on DC movies so many times now, only to end up utterly disappointed. Fool me once, shame on you. Fool me time again with GL, MOS, BvS, JL, WW......awful. Hard pass this time.

You mean Aquabro.
Been fooled on DC movies so many times now, only to end up utterly disappointed. Fool me once, shame on you. Fool me time again with GL, MOS, BvS, JL, WW......awful. Hard pass this time.
Mera looks hot &amp; Black Manta looks badass though.

No one thinks WW is awful.

And GL was terrible, but not a part of the new batch of DCEU movies, so not relevant to the current argument.

Been fooled on DC movies so many times now, only to end up utterly disappointed.

Like the rest of them, I'll watch when it hits the cable or Netflix. I luckily have avoided all the DC in the theatre and with good reason, they all fucking suck; hmm...JL being the worst(?). What happens if Momoa is in a Sony movie for this sequel and they have to put a fake face on him? Scary.

WW was god awful. Decent start with good chemistry but straight in the toilet after that.

WW was god awful. Decent start with good chemistry but straight in the toilet after that.

Haha...sure whatever.
I know how much you trust others ratings. 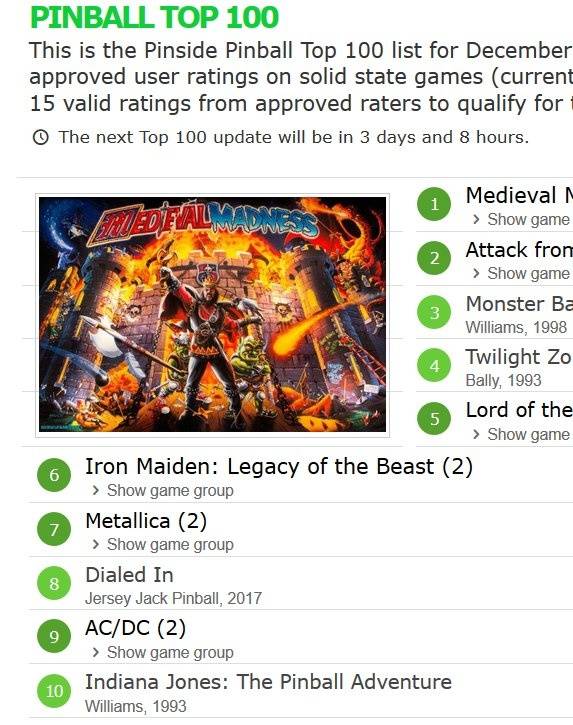 You mean Aquabro.
Been fooled on DC movies so many times now, only to end up utterly disappointed. Fool me once, shame on you. Fool me time again with GL, MOS, BvS, JL, WW......awful. Hard pass this time.
Mera looks hot &amp; Black Manta looks badass though.

Give Aquaman the benefit of the doubt, it’s better than all the DCEU movies put together and I wanted to love them.

Aquaman is fantastic, I went in prepared to be disappointed, like I was with MOS, BVS & JL, but Aquaman was awesome, my son loved every minute too.

DO NOT WAIT FOR NETFLIX ... the movie needs to be seen on a big screen in 3D. Its a wide body JJ type of movie... LOL

Its a big movie with lots of visuals and it needs to be seen in 3D on the big screen.

No one thinks WW is awful.
And GL was terrible, but not a part of the new batch of DCEU movies, so not relevant to the current argument.

What are you? The definitive answer for all things? GTFOH You're like this in every thread I read.

IMO WW was terrible. The origin story was alright, then the whole movie went off the rails with another weak DC story. The last 30 minutes were unwatchable garbage. I should have walked out like I wanted to. Weak to the core.

Every one of these new DC movies are seriously flawed. A brooding sad Superman with the personality of dishwater. A Batman who flat out kills his enemies without discretion. An emo smart-ass Flash who can't hold a candle to the TV version. My favorite DC character GL just completely ruined by...well everything in that movie. I don't even remember what Cyborg did in JL. WW was hot, I'll give her that, but that's the last thing you should be thinking for such a strong iconic female character. Don't forget about the absolute worst version ever portrayed of Lex Luthor. Again my OPINION.

I guess I'm just not willing to budge on my version of these characters from reading all those DC comics in the 80s, growing up with Superfriends & Christopher Reeve, reading Alex Ross DC comics, etc etc. Not like I'm the first person saying this about these DC movies (besides the Nolan Batman movies obviously).

I like Jason Mamoa. He was outstanding as Drogo in GOT. He just comes off as "Aquabro" for me. Just can't take him seriously. I'm expecting another dumb story, with forced jokes, over the top CGI, and another lousy representation of a DC villian. Again it's a pass. Not going to fool me again.

What are you? The definitive answer for all things?

I’m sorry but you’re wrong about Aquaman and Wonder Woman.

For starters I’m not sure anyone has ever made an origin movie as good as Wonder Woman until Aquaman. Wonder Woman was excellent. Aqua man is better.

I will admit that Justice League doesn’t help Aquamans case, that movie in general shouldn’t have ever been made. They needed to develop all the characters first like Marvel did and slowly bring them all together. Wonder Woman is so much cooler in her own film rather than throwing her into the mix in SVB or JL. Aqua man comes across as a worthless hero in Justice League.

I can’t deny that but in his solo flick that is NOT the case... Aquaman is a human, he loves the water but he also loves the land. We go below the oceans and see a World never seen before. The villain is AWESOME especially Black Manta.

Look just because one superhero DC flick was bad doesnt’ mean they will all be bad. Aqua man is awesome and you should only judge it based on this movie not what happened in other movies.

Just my two cents and yes it would make an awesome pinball.

I agree with you about Aquaman being awesome and people need to go see it! However.....

I’m not sure anyone has ever made an origin movie as good as Wonder Woman until Aquaman.

Ironman is easily the best pure comic book based origin story put to film, plus it was the starting block for the MCU, that is one hell of a foundation to start a 10 year plan off.

Then again if you want to compare DC to DC Batman Begins is single handily the best DC origin story put to film, you could argue that Dark Knight was an origin film for the Joker.

Only if its based on the old justice league cartoons. This new Aqua Man is so fake and stupid. Nerdy blond guy is the REAL Aqua Man!

Only if its based on the old justice league cartoons. This new Aqua Man is so fake and stupid. Nerdy blond guy is the REAL Aqua Man!

If your basing that purely off JL, you need to check out Aquaman, while is still a little bit of a Bro it’s certainly played down compared to JL.

And the rumours of the planned sequel where to show him transition similar to Tony stark in the MCU, becoming less carefree and arrogant (aquabro) and stepping up to becoming someone with responsibilities and caring for other than himself oh and being a king.

Sorry, Wonder Woman was not good in my opinion. Gal Gadot is a weak actress at best and relies upon her looks too much. Chris Pine was the most interesting part of the movie. As stated above, it starts out ok, but once you hit the midway part you are off the rails. Both my wife and daughter thought the story was weak, there was nothing wondrous about Wonder Woman, and that it was just there.

Also, Aaron Eckhardt was much better in the Dark Knight than Heath Ledger. But, he did not die, so there you go.

Agree totally about WW although I enjoyed the film a lot up until the final act, the villain fight at the end was shit and suffered from a lack of imagination and poor direction, something I hope Jenkins address with WW1984 when it comes to the action scenes.

WW villains running around, literally stopping to giggle at each other; just pathetic.

Wonder Woman was an excellent film and ground breaking in that it was the first time we had a female lead Comic Book movie. That was risky on the part of Warner Brothers but they did it and paid off big league. Wonder Woman is one of the best superhero movies ever made. Aquaman I think is now the best origin movie ever for any superhero.

As for Iron Man - that whole series is totally ridiculous and so far off from the comic its a joke. His suit weighed thousand pounds but he's able to drag it around, then in another movie it literally is in a suitcase, then the 3rd one where they teased his main villain only for that guy to be a fake. I'm not an Iron Man fan because they've used Tony Stark as the tool to solve any problem because I guess he's just that much smarter than anyone who's ever lived. When there is a plot issue, oh yeah we'll just have Tony Stark invent that.

When you look at Batman Dark Knight you actually see where Batman gets his stuff, and its believable. The Marvel movies are NOT better they just have Disney behind them. Black Panther was so overrated its not even funny... that movie at best was a 6. The acting was terrible.

Justice League sucked on many levels but don't hold that against Aquaman.

Here is my ranking of Comic Origin movies

Either way Aquaman is a great movie if you want to give DC a chance after the disaster of Justice League its a good movie go see it. And bring on the Pinball!

Wonder Woman was an excellent film ....

It just really isn't. But if there's one thing I've learned it's never continue an argument with someone that continually types OMG so the world is big enough for both of our opinions.

My top 20 rating for best Comic Book Movies EVER...