Just finished cleaning up an Apollo, was very excited about this one because it is a keeper. However, when I got it there were numerous scoring problems, and it was really dirty. Got the scoring problems solved, did the typical tear down to clean and polish everything, replace the bad lamps and fix the bad sockets.

When I first put it back together, it would start a game fine. Then during play, when a ball drained it would randomly fire the kick out coil over about 3 to 6 times, and skip a ball, sometimes two. ie: after first ball, would jump to second then third ball, or after fourth ball would stop on five then go to game over. but the kickout fired more often than the stepper skipped balls. After the diagnosis attempts noted below and checking the entire outhole switch / relay circuit (yes I have a schematic) it now does it after every ball. Progress of a sort. Diagnosing attempts to date:

Traced every wire in the ball return / kickout sequence. Can't find a short or break. (Which of course doesn't mean there isn't one)
Cleaned and gapped and visually checked that the movement was correct, on every switch in the circuit, including on the score motor.
Checked the small ball kicker switches / gaps.
Unscrewed the score motor from the bottom board and visually inspected, checked gaps, and cleaned contacts. In particular on stack 4.
Checked switches and gaps on every relay in the circuit, in particular the Outhole relay.
De-soldered outhole switch, and touched wires directly to fire the outhole relay / kicker.
With outhole kicking over and over, opened / closed manually every relay in the game, and moved by manually pushing coil rod - every stepper in the game. And nothing made it stop. It either eventually stopped on its own, the ball count finally kicked to game over, or I turned the game off.

Odd notes: Took the kickout switch out because it showed continuity on the meter whether contacts engaged or not, testing at the solder lugs. After switch removal, wires were still showing continuity through several simulated ball return cycles - then all of a sudden while connected to the meter - stopped showing continuity and wouldn't fire the outhole relay. Nothing, dead. I still could fire the outhole relay with the switch contacts on the relay itself - and then it still repeats over and over.

Feel like I am missing something simple and stupid to miss. Ideas?

Did you check the gap on the Outhole sw.? It might be too tight and bouncing a bit.

What does the Small Ball relay do?

Isn’t the small ball relay for the backglass bagatelle animation.

But how is the gap? and just wondering what the function of the Small Ball relay is.

Did you check the M/B on the Launch relay? It may be the cause of the Outhole relay staying energized.

But how is the gap? and just wondering what the function of the Small Ball relay is.
Did you check the M/B on the Launch relay? It may be the cause of the Outhole relay staying energized.[quoted image]

yes checked launch relay but worth checking again. Sometimes new day catch something you missed. Will get back to you.

yes checked launch relay but worth checking again. Sometimes new day catch something you missed. Will get back to you. 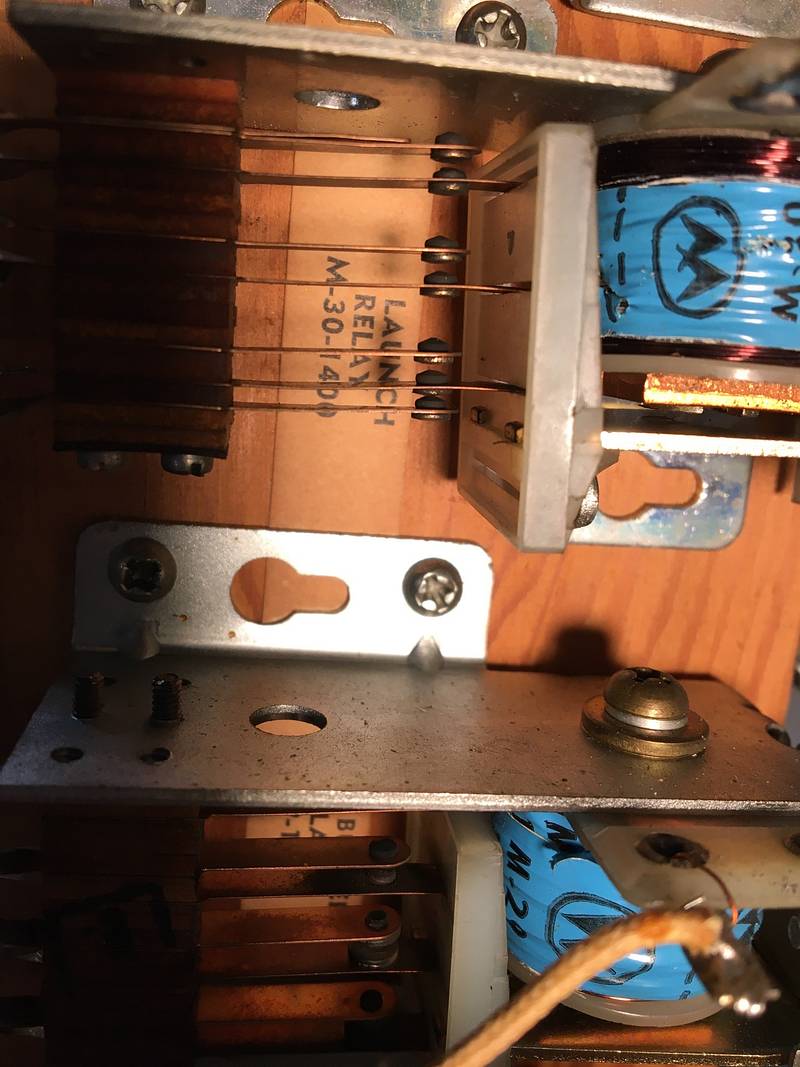 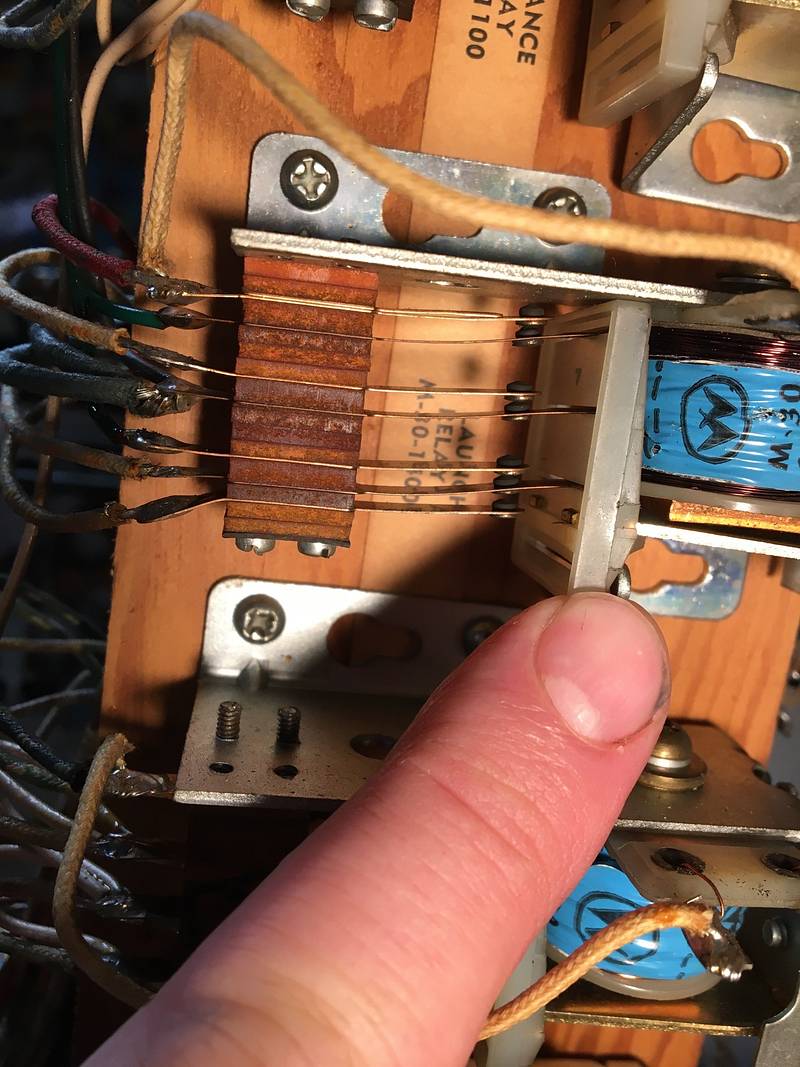 I have manually moved all relays on the same board as the launch relay, while outhole was firing. No effect.

What ever it is, it seems to trigger most or all of the new ball sequence. Including the ball count unit, except the outhole kicker fires more than once for every time the ball count advances.

Problem solved. Trying to track it down, put thin cardboard strips between every switch contact in the circuit. Including on motor 3,4,5 stacks. In doing motor switches had to move some wires on the back of the stacks to check wire colors. When I ran the test pulling one cardboard spacer at a time. Found the problem gone. Best guess is wires on the back of a motor switch stack were too close.

Now on to the bonus / small ball firing problem. This game is never going to be 100%. Will check back if can’t solve this one.

Thanks as always for the advice and suggestions.

Congrats on finding it, but here is a weird thing: This bit of schematic show Ind-B as NC, but if you look at the score motor breakdown it is definitely NO. 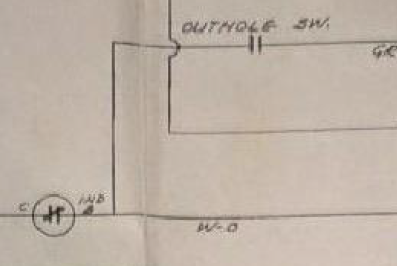 The launch relay hold in switch has wire connections that look too close. Test with your cardboard method if it helps.

The launch relay hold in switch has wire connections that look too close. Test with your cardboard method if it helps.

Will do, original problem solved, but having random issue of mini-ball launching more than once, sometimes two or three or more times at the end of a ball when the launch light is lit. Will widen the adjustment on that switch and see if it solves the problem. Geeezzz it's great to have Pinside back.

Well, this game is seriously driving me crazy, and I am sure it is something simple I am missing. Have not been able to solve the small ball repeat firing problem. And in working on it have had the bonus count down problem re-start. I am sure they are somehow related. And thinking maybe it is possibly related to the advance unit. The "common" thing about both problems is that they both have a relay sticking in the closed position. For the bonus count, it is the target relay. For the small ball, it is the launch relay.

One thing that might help, is does anyone have a picture of the advance unit from the spider side, showing the spider position and wire connections? Have scoured the internet and can't find one from that angle. Have used jumper wires, paper between switches, and every other method I know to test all other parts of these two circuits.

Any pics of the Advance unit, or ideas how to diagnose this that I may not have tired, would be greatly appreciated. 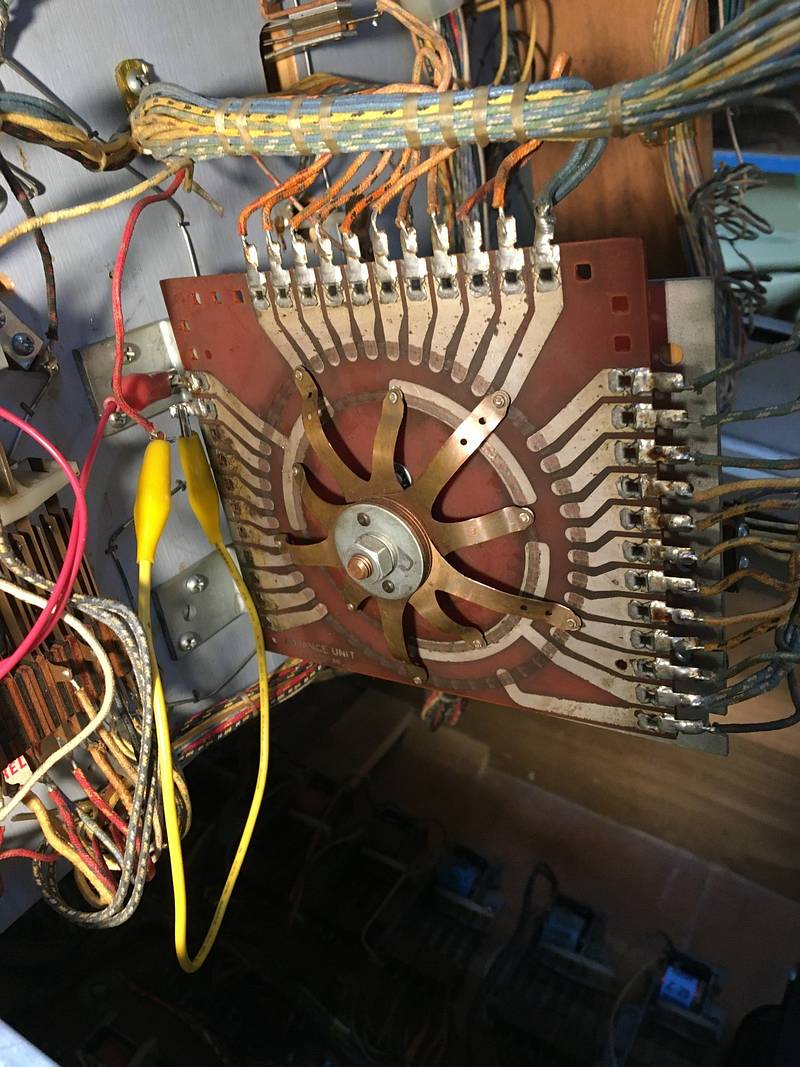 If you'd like to try a phone call (and you have a paper copy of the schematic), send me your cellphone number in a private message and I'll make a first reply with a text message. 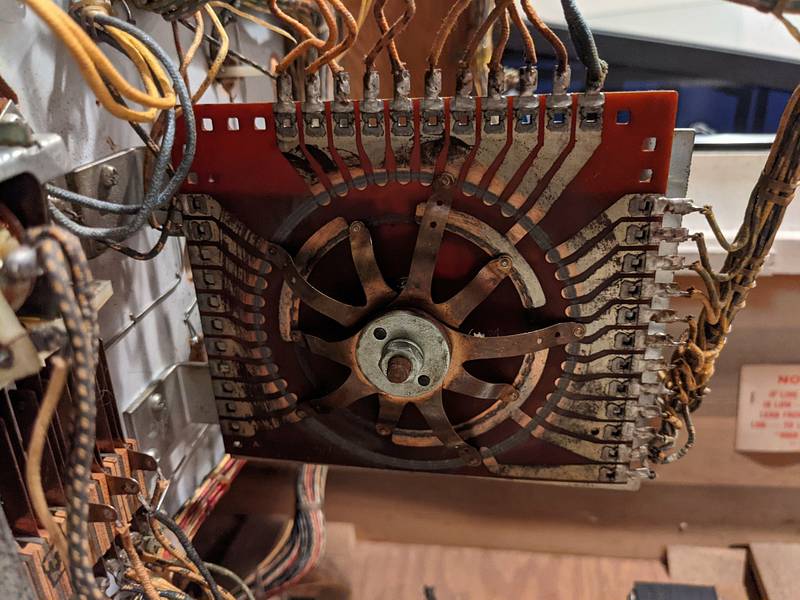 Great, thanks. Confirms my 10th position wires are in the right place.

Thank you Howard R for walking me through the circuit paths on the phone to find the problem. Actually was able to find and solve two problems. The repeating small ball firing was some kind of black "gunk" on top of the switch stack of the small ball rest switch, that apparently was conductive. Cleaned it, and problem solved.