Anyone have experience with Ni-Wumpf's Reprogramming Feature?

While browsing Ni-Wumpf's website, I noticed that their new boards can be reprogrammed by the user using their GUI "Integrated Development Environment." It looks like you can rewrite software features on their System 1/80 replacement boards, and write the to the ROM, and use them in game. Looks like a really neat feature, and I've never heard of it until now. Given that, does anyone have experience using this feature? How well does it work? What are its limitations?

Only the system 80 board, if you can manage to get a computer with a serial port to communicate with it. (even with that I still can't get mine to communicate)

The software can only be programmed with a clunky custom programming system only accessible via a terrible java applet via the website (took me 20 minutes to convince my browser to even agree to load the ancient file). Although I haven't gotten that far, it seemed like your compiled ROM could only be retrieved from the local Java applet via their ftp server for some reason.

The programming system has very little documentation, and the custom language is hard to read as it attempts to be 'English'. Can't even pass parameters to subroutines, need to use global variables. Can't have multiple different code windows open at a time, so it's hard to cross reference anything.

On the plus side, considering that all their boards and the pascal boards use reprogrammed software, at least one person made an attempt to let them be reprogrammed. I wouldn't want to write a whole game in them (and I'll happily write a game in assembly) but it's nice to be able to make little tweaks to the existing games (and all the code for the different sys80 games is available for reading which is great).

If the editor was open source it'd probably have gained more traction as someone could have improved it...

Thanks for the information. I knew when I saw "java applet" in their description, it wasn't going to be all that great. Looks like it's not really worth the effort. Interesting that they chose to use a custom language, instead of something more tangible, but I'm guessing they did that to make it more approachable--which was negated in the difficulty to use the software anyway.

Kind of a shame that it isn't more developed. It'd be nice to see similar abilities on other platforms as well.

Thanks for the information. I knew when I saw "java applet" in their description, it wasn't going to be all that great. Looks like it's not really worth the effort. Interesting that they chose to use a custom language, instead of something more tangible, but I'm guessing they did that to make it more approachable--which was negated in the difficulty to use the software anyway.
Kind of a shame that it isn't more developed. It'd be nice to see similar abilities on other platforms as well.

There probably weren't any higher level languages available for the CPU (Z80?)

why not just email and ask him .. hes a really good guy.. most helpful indeed with issues on his boards

why not just email and ask him .. hes a really good guy.. most helpful indeed with issues on his boards

That's been the exact opposite of my experience. I gave up trying to get him to fix the code for black hole

Looks like the CPU for the System 1 board is a STM32F103 which runs an ARM Cortex-M3. Sorta overkill for a System 1 CPU, I'd think. I couldn't find a spec sheet for the System 80 CPU though.

I understand the new system 80 board being developed now is using ARM setup. I'm privy to some inside info, but can't divulge anything else right now.

Max - the reprogramming effort is pretty dead. It was developed 15 years ago for people to develop their own games on Bally -35 CPU's, System 1 CPU's, and System 80 CPUs (never finished the Game Plan port), however, due to lack of interest, I stopped supporting it. With the release of the board in 2004 - Java was KING! But nowadays, it would be difficult to get that environment set up to work. Yes, clunky. (no one really has RS-232 capabilities any longer, and it is pretty hard to set it up via USB). I know that Zack had some issues that even I had difficulty trying to understand - so I grasp the source code frustrations w/out updating the toolset. Issues on a board that we hadn't produced for a couple of years would need a lot more investment in time than I could afford - particularly when the production code didn't seem to show those issues.

This was never intended to be a programming language, it was intended to be an IDE - if there are programmers out there, you'll get the idea that there are API's that pin coders don't need to code and understand. An abstraction layer for the hardware (in assembly), a layer for the platform (Bally, Gottlieb, Game Plan), and a system layer for common routines that EVERY game needs (score 100 points for player 3). More importantly though, the cost / effort of getting a cross-compiler for whatever computer the pin coder wanted to use at home, install it there, license it, and get it to work with the entire 'C', assembly, and object code stack that Ni-Wumpf wrote would likely have killed any interest in getting folks involved with it. My approach was to host the cross-compiler, remove the cost/effort, and make it as easy as: "switch hit; do what a pinball machine does." It was all object oriented internally. But this stuff is all in the coding manual for the IDE (which *does* exist BTW). It is not PinMAME - this is hardware. Simpler in some respects to PinMAME, more insurmountable in others.

Anyway, if there were real interest in coding games - there'd have to be a whole LOT more input than a couple dozen guys doing tweaking (no offense Ed, if you're out there - that was GOOD work on the new Black Hole game).

Wow! Thanks for that explanation! I completely understand the cost analysis for your reasoning. Despite the difficulties, thanks for giving us the opportunity to give it a try. Interesting that RS-232 was used for the development of this. Wasn't USB pretty well adopted at that point though? Last time I really saw a serial port was on an old laser printer. I think there's genuine interest in coding games, I see threads pop up all the time around here asking about ROM hacks or rewriting certain rules, but it looks like the interest lies in newer games from the mid 80s onward to give them more depth--not so much System 1s or 80s.

...and yeah, the new boards use an ARM. Overkill? Nah! Cost!

You know, after I typed that up, I thought about that. It's easy to forget just how fast SoCs and CPUs are advancing! Even the cheapest "off the shelf" chips are pretty fully featured these days. Could you tell that to TI though? They STILL use Z80s in their graphing calculators that cost way too much...

Anyway, Ace, thanks again for your response. Really appreciated it. And thanks for your contributions to the hobby.

I'm thankful for and have used the programming IDE and interfaced with a (then) modern computer via a USB-serial connection and a lot of fooling around with a terminal program several years ago. It was worth the effort.

Windows Hyper Terminal is the suggested program to use. Unfortunately, I think Windows XP was the last Windows version to have it.

I used minicom or some other Linux terminal and got it to work (IIRC). I'm sure there's other terminal software available for Windows 10.

from memory you can terminal with putty.exe easy enough 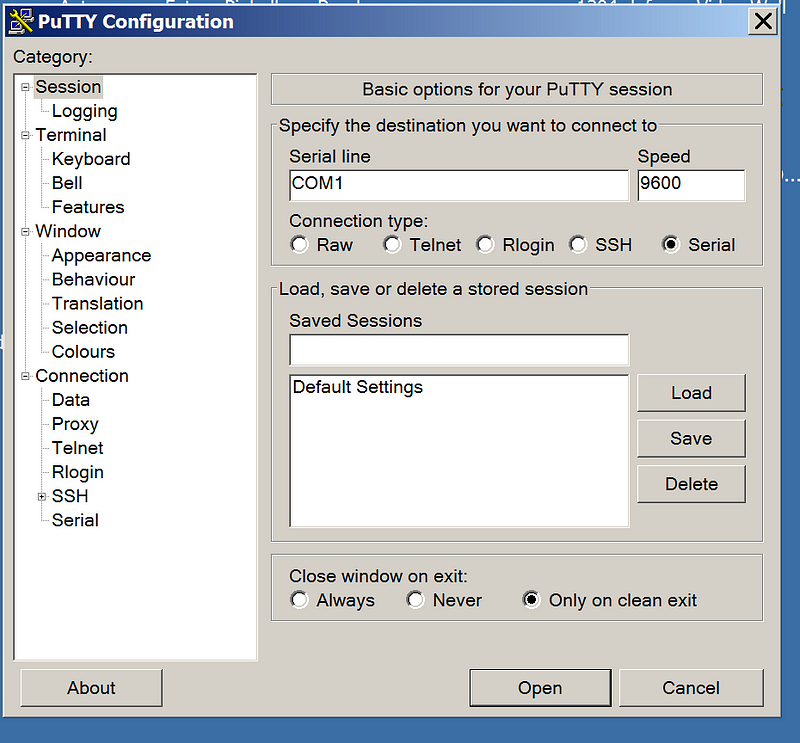