I was seriously considering putting a deposit on an AFMR standard or SE, but started thinking about my lineup. SM is a fairly similar game. The Sandman feature is essentially the same as the flying saucer target. Extra flipper and no scoop, but I can't see having both in the lineup. Is it worth the extra $2k? I've played the original a lot, but question the staying power, just as I question SM's. Does anyone have both?

AFM is a classic. Some consider it Pinball perfection. The good news is that both are being made so it's not a permanent decision!

I was also thinking about this as well. I bought SM last month, before I knew of AFMr and because it was near mint condition. I owned SM before for a while, sold it and just picked up last month and added Color DMD.

I have a lot less playing time on AFM so I can't say if it's any better than SM?

I am probably just wait and see what AFMr looks like once they ship and if there are any PF issues or anything else that could be a demerit.

AFM will likely be in production for 2 years and will be on the re-sale market so it's not as if you need to make a decision right now.

I hope not. I have sm and st they are very similar but still work for me. So is im and met.

Good points by all. Yeah, ST and SM are very similar! I never considered that. Space and funds will dictate that it's one or the other. Considering recent events, there's no reason to be rash. Timeline is 4 months supposedly. I'll believe that when I see it...

Easily 2 of the top pinball machines ever made, I'd be getting rid of that Black Rose way before SM

I'm happy with SM but would add AFM if I had the room, maybe in a year I will buy one, the good thing is that it's not limited number for the middle edition.

I hope not. I have sm and st they are very similar but still work for me. So is im and met.
Tron has same target . Really considering afm as well.

IM and MET, in my opinion, are completely different games. I have them next to each other and never once thought of them as similar.

I have had both. Logically, I think SM is better, because it has more to do, better rules, and is just a great game. I don't remember the quotes, but man is it serious "My Rosie's dead". JJ does some fun work though.

Emotionally, AFM is better because the callouts are hilarious and the dots are great. The Martian attack is sweet. It is a straight up fan layout though, and the rules are what they are.

I got rid of SM because I wasn't playing it as much as my other games, but I wouldn't mind getting one again. I don't think you can go wrong either way.

My least favorite part of SM is Sanbman drop bank, Tron is not as bad because it has the spinning disc.

I love the Venom ramp, and Doc Oc magnet shot on SM.

SM all the way! Great pin! 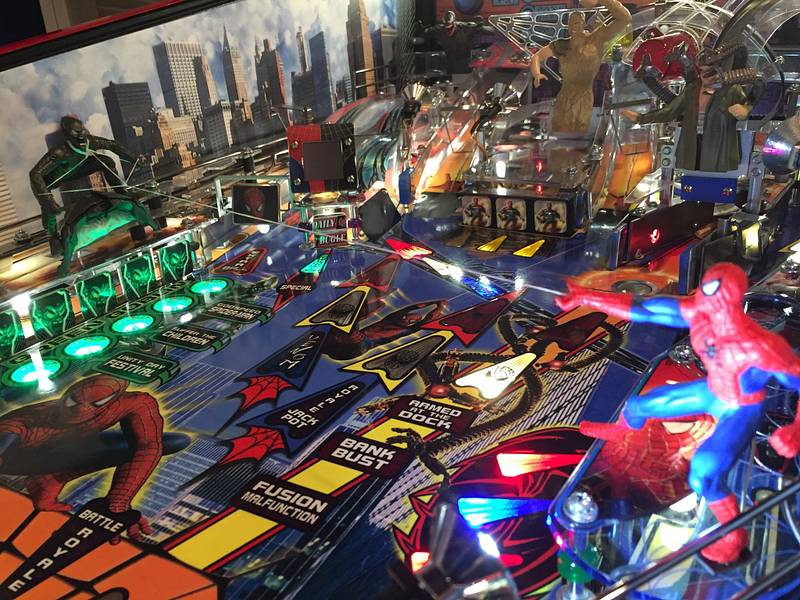 I was seriously considering putting a deposit on an AFMR standard or SE, but started thinking about my lineup. SM is a fairly similar game. The Sandman feature is essentially the same as the flying saucer target. Extra flipper and no scoop, but I can't see having both in the lineup. Is it worth the extra $2k? I've played the original a lot, but question the staying power, just as I question SM's. Does anyone have both?

I have had both and both are gone. Miss AFM from time to time. SM not at all. I do have ST and think its a better player than SM overall. SM arrow modes are more creative than ST modes but the villain battle are just too linear. BSMB and Klingon MB are identical. The multipliers are easier to get on SM vs. drilling down three levels on ST. However back to your question AFM vs. SM

To me AFM saucer players nothing like Sandman. AFM being my preference. The ramps play better on AFM with the offset center lock shot being my favorite. It is the simple gate that makes a dead end actual lock shot become a flowing third ramp. SM has nothing like Martian MB or Strobe MB. AFM all day.

I love my Black Rose! She's simple in rules, but challenging as hell... I'm at peak capacity +3 so looking to trade/sell up. Regarding SM, ST, and AFM, I never thought of them as similar until it was brought to my attention. It goes to prove that a pin is defined by much more than it's playfield layout. Dots, callouts, art, rules, and subtle nuances all can add or subtract from the experience. I'm not usually one to over-analyze a game. I either like playing it, or not so much! This might explain all the initial negativity about Aerosmith. Now that people are getting their hands on it, the reviews are much more positive. I definitely enjoyed it!

Despite obvious layout similarities, SM and AFM are so very different that they are both ideal in a collection. I have had AFM for 15 years and still love it. The *only* reason I do not have a SM is that a friend 5 minutes away has one so I get my fill every time I am there (and want more). If he got rid of his it would be the next game I bought.