I was thinking about doing something similar with my Homerun. It’s going to cost you about $55.

Read and watch the video in this link.

What’s great about this, is you can add more than just crowd noise. Become creative. Easy setup. 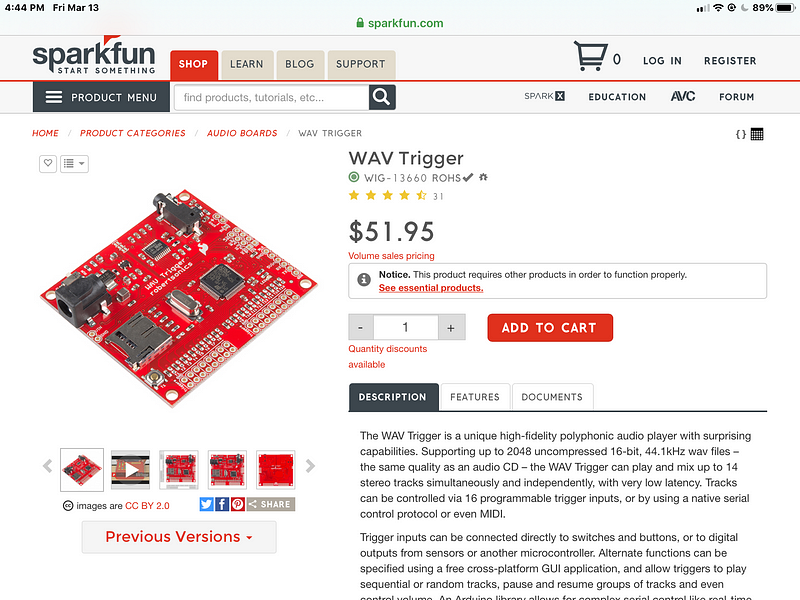 If you search for

You'll get a few more threads with ideas

I was thinking about doing something similar with my Homerun. It’s going to cost you about $55.

It’s a little more tricky than that.

Well, if you just want something to make some noise all the time, yeah, you could use that.

But you can’t trigger that type of board with an EM. Been there, done that.

We created a board that does ... it takes triggers from the player up lights, tilt, game over. It plays any MP3 you want for each of the 6 triggers.

Check out the end of my LZ build thread and you can see them. $99 plus shipping. Only work in EMs - we are building a different version for SS when we have some time.

For anyone wondering what the difference in boards might be, the Sparkfun board has 16 inputs (or triggers) that require 3.3 or 5.0 volts DC while

rotordave's board appears to have 6 inputs that can use the same 6 volt AC signals used by EM light circuits. That allows the triggers to be wired directly to the game's feature lamps.

To use the Sparkfun board (or most off the shelf microcontroller boards) you would need to convert the AC signals in the game to appropriate DC levels. You might be able to do that with a simple rectifier circuit (per trigger) or you could add switches to the relays that would switch DC signals for the board at the same time as switching the AC signals used by the feature lamps. It would be possible but it's not plug and play.

So our little board actually has a programmed processor on it to overcome this.

You might want to get the schematic for Williams Upper Deck, which has electronic sounds, to see how they trigger the sounds.
.................David Marston

If you can add a switch to the relays that ring the bells you can use that to trigger the wav player.

You're adding a simple contact switch that's only connected to whatever input on the wav player - you'll have to get a separate power supply to power that. There's no electrical interaction between the machine's signals and the wav player electronics, only the mechanical action of the switch closing the contacts that the wav trigger looks for.

rotordave 's solution since it sounds more plug and play - there's going to be some experimentation involved otherwise, in putting a couple switches into relays, attaching wires, getting a small power supply, speaker, and wav player board (the one I was thinking of has several ways to trigger it, https://robertsonics.com/wav-trigger/ - the way I was figuring would be used to combat switch contact bounce was to select the trigger to only restart when the track was done, so your wav file itself would handle switch debouncing)

Unfortunately probably not for this application. It’s triggered by the 6v AC player lights and programmed to work for the specific application of playing background music for each player, and a tilt sound and a game over sound.

You could make one specific for this application, but not something we would be interested in doing as we haven’t even got enough time to make the current ones lol

I know nothing about wav players or anything like it, but if it runs off 6V, and you would
like it to work off hits, if it only takes a single pulse, an extra set of switches on the Single
Relay should do it, and wire one of the switches to a hot 6V socket/lead.
It's been a while, but I'm pretty sure the Single Relay energizes when any hit is made..