I recently moved my Triple Strike down into my basement, but once I got it down there and reassembled it looks as if it will no longer score or chime. Also, the ball count does not appear to be working correctly either, as it stays at 3 even after draining a ball. All other lights and everything appear to be working correctly. If I roll over the pins, the lights will go off, but nothing else triggers. Same goes for the drop targets and everything else. Bonuses still trigger like they should, minus the scoring of course. I thought maybe it was because one of the jones plugs wasn't seated correctly, as I obviously had to unplug some from the back box to move the machine and it appears as if one of them pulses the point relays/chimes. (see attached picture) Reseated the jones plug multiple times, but to no avail, plus I'm not sure where the ball count issue would come into play on that, since it doesn't appear on that jones plug. I was able to manually trigger the 10 point relay and it did add points and the chime did go off, so there has to be a disconnect somewhere that I'm missing. I've also included what I believe to be a relevant part of the schematic. Any help would be greatly appreciated! Thanks! 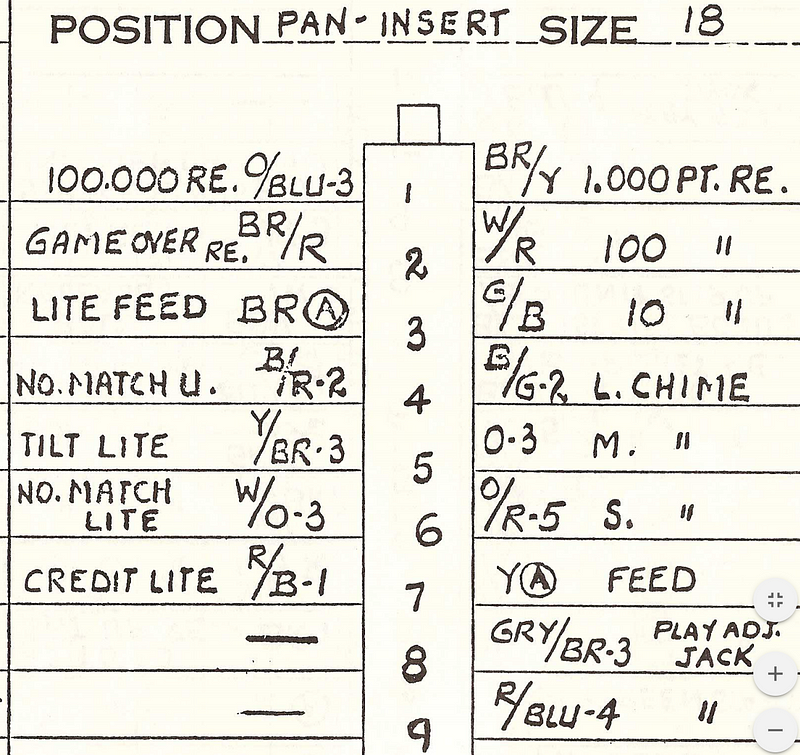 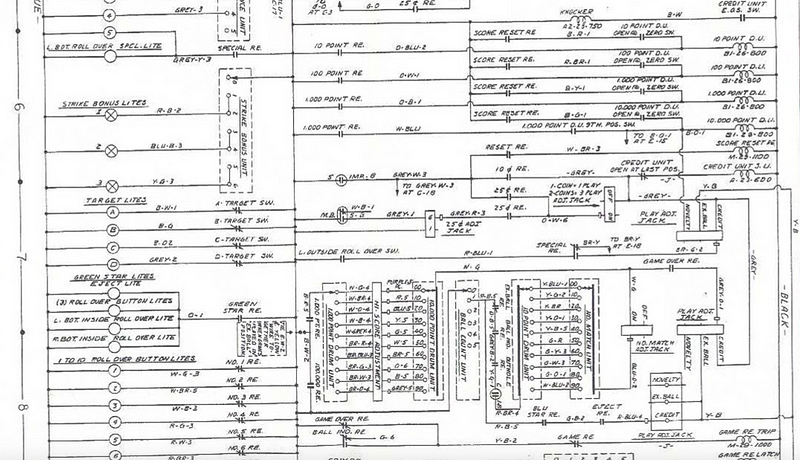 Since you have multiple failures in the backbox, I’d focus on something common, like the red wire. You should be able to measure AC voltage from red to yellow in the backbox once you begin a game. I’d begin at the jones plug and go from there.

My wild guess is a jones plug terminal broke or the wire broke free from the solder joint, since it happened after a move. You’ve got too much working for it to be a fuse.

Update: Ok, so I've been testing quite a few different things, so now I think I'm better equipped to give a description of the problem and what might be causing it. If anyone has suggestions on the most likely place causing the issue, please let me know. So, first, the two main issues seem to be that the 1000 point reel is not pulsing. Anytime I would go over the 1000 point mark, it never triggers, so the score goes back down to zero. The chime for the 1000 points seems to trigger fine. Now, when attempting to start a new game, if the reels aren't already set to zero, then it gets stuck in an infinite loop of trying to reset. I'm not sure if this is because it's trying to reset the 1000 point reel and it can't, so it continues to loop the 100 and 10 reels over and over again. If someone can confirm if this seems correct that would be great, because then I know I'm dealing with 1 problem instead of 2. I've tried a few things at this point. I've tried jumping from the score reset relay to the 1000 point relay, but that didn't seem to do the trick. I've cleaned all the contacts on all the switches as well. I've tried jumping from the jones plug directly to the 1000 point relay, but that didn't seem to do anything either. I've also manually triggered the 1000 point relay, but again, it only chimes and doesn't count the score up. It did actually trigger the score like once or twice out of 30 attempts, though. I know the score motor also has a section that specifically triggers the 1000 point relay and the score reset relay, so I'm wondering if the issue could be there as well. See screenshot provided. Any help on the most likely problem area would be great! Thanks!

it continues to loop the 100 and 10 reels over and over again. If someone can confirm if this seems correct that would be great

HowardR answered your question on the spinning reels during reset.

The 1000 pt issue is probably a couple of things. First, check to make sure that the reel will step up smoothly if you work the coil plunger by hand. Then check the end of stroke switch and the wires that go to it. That switch has to stay closed long enough for the step up to happen and open at the end of stroke to let the 1000 pt relay release. Then you can check the 900->1000 carryover. The 9 position switch on the 100 reel is involved with that.

If you’re still having the problem of the ball count not advancing, that sounds like it could be caused by a problem with the ball index relay. The purpose of this relay is to ensure the ball count does not advance unless at least one score is triggered before the ball hits the outhole switch. Either the relay has a switch that is not working correctly OR the relay is not getting properly triggered by the score relays.

It's odd that it worked before you broke it down to transport it to your basement. Are you quite certain that you have the Jones plugs in their correct sockets? Normally, they have a shoulder on them so you cant get them wrong and often one p,ug will have more pins. I'd certainly take a very close look at those and ditto onnyhe motor board too, just in case.

Thanks for all of your help so far. So, thanks to

HowardR I was able to fix the score reset from continuing to cycle. As for the ball count advance, that has been fixed as well. The final issue seems to be with the 1000 point score not rolling over. I have tested a lot of different things out and I think I may have finally noticed something kind of interesting. First, the 1000 point score relay appears to work fine if I manually trigger it, but ONLY if I haven't started up a game. As soon as I start a game, I can trigger it once, which usually just results in the chime going off, and then it seems to stick in that position and the relay hums slightly. I would think this isn't correct considering it would need to be able to trigger again anytime 1000 points were scored. Is there something that would be causing this to stick in that position and not reset? Should it be doing that?

I can trigger it once, which usually just results in the chime going off, and then it seems to stick in that position and the relay hums slightly. I would think this isn't correct considering it would need to be able to trigger again anytime 1000 points were scored. Is there something that would be causing this to stick in that position and not reset?

This circuit makes the 1000 Point relay "stick" until the 1000 Point drum unit solenoid pulls in. The indicated switch isn't opening in your game when it should.