I've never been much of a ball sports guy, especially when the balls tend to get inordinate in size. Those tiny little golf balls always end up arcing off in directions that would make the St. Louis Arch blush with shame for it's gentle shape. Worse yet are those big ass bowling balls, I swear there are magnets in the middle of those orbs that draw them into the gutters a mere 10' down the alley. So I found myself a bit perplexed when I really enjoyed playing Clay's ball bowler during the VFW open house this past spring; I really do not enjoy bowling but this was FUN! The next thing I knew, I was on the search for just the right machine; one that would not take much work to get it playing at a price that a family with one kid in college and one on the way could afford.

After a few projects proposed by Pinsiders passed on, a night of little sleep led me to some surfing for yet another prospective candidate. This night, however, was not a loss of sleep for no reason. I ran across an estate sale for a gentleman who had a well outfitted gameroom...from 1970! Among the requisite pool table and a few pins sat a 1970 El Grande Big Ball Bowler, purchased new, set up, and never again moved. I was ecstatic to find a true home use only machine that had a good chance of working 100% with a little love. The auction company would accept phone bids, so despite that fact that it took place during work hours, I thought I would have a good chance of bringing this one home unless something drastic happened to intervene. Wouldn't ya know it, something did.

I work as a firefighter/medic for our city, a job that can leave a fair amount of latitude for such things as calling in a phone bid for a vintage arcade machine, unless you get called out for an emergency. As the lot neared it's time, it happened, a structure fire in an industrial building. No getting out of this one, my hopes of finally finding my ball bowler literally went up in flames.

I was a bit dejected for a week, but pulled up my boot straps and figured that the right machine would find me eventually. Eventually happened much sooner than I anticipated.

Browsing for machinery for my business the next day, the bowler from the estate sale popped up in a regional ad with a lathe and mics. chattel. Seems that the bowler was swept up by a gentleman who cruises auctions and flips the items that do not fit into his stores particular genre. A few emails later and he confirmed it was the same machine, that he witnessed it lit up and operating, but that it would need some work as it had a few operational quirks. He had it loaded into his enclosed trailer and offered to deliver it for a few hundred dollars more if I would give him a few leads on people to pick in the area. Before I knew it, the El Grande was headed west to it's new home.

When it arrived, it was in great shape albeit quite dirty. The bad news...in an effort to move the machine out of it's previous residence, he had cut the wiring harness "because they must have hard wired it when it was installed since it was in a permanent residence." Oh boy. When I pointed out the Jones plugs a mere 10 inches from where he had cut the harness to separate the head from the lane, he just shook his head..."so that's what those board things are! Let's get it unloaded."

Some serious man-handling got the monster in the house and downstairs so I could begin working on it.

The machine is like a time capsule, every manual, schematic, and typed instruction sheet is in place. 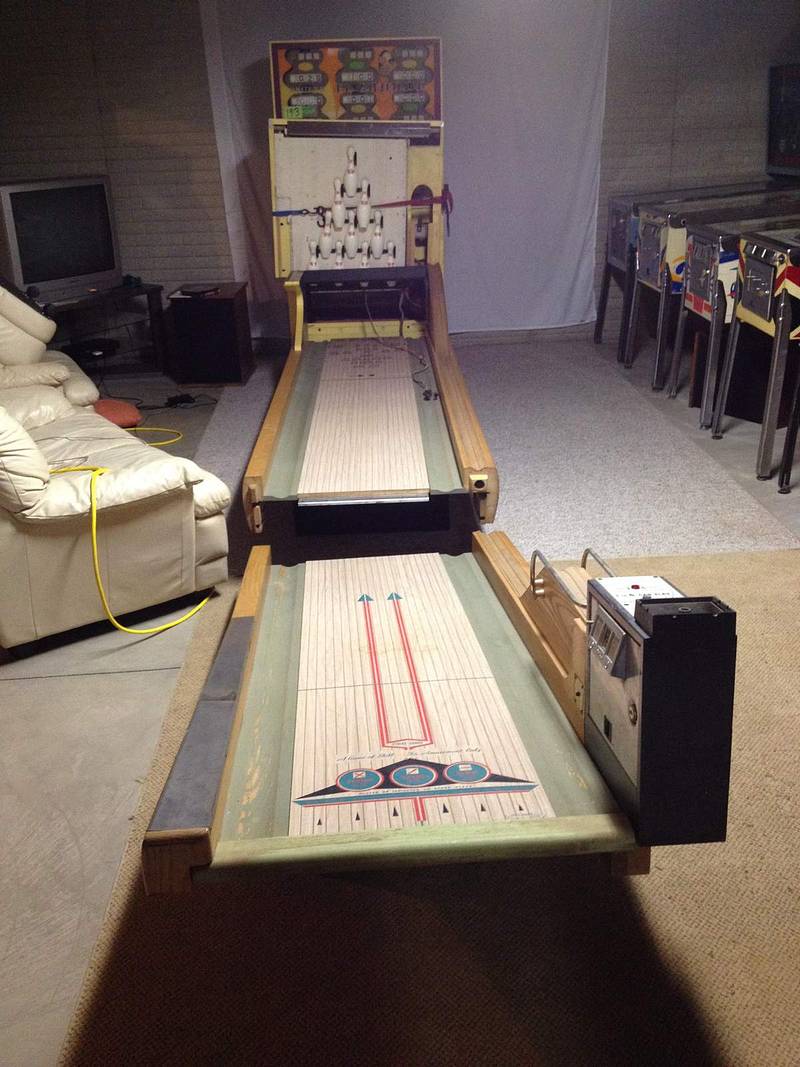 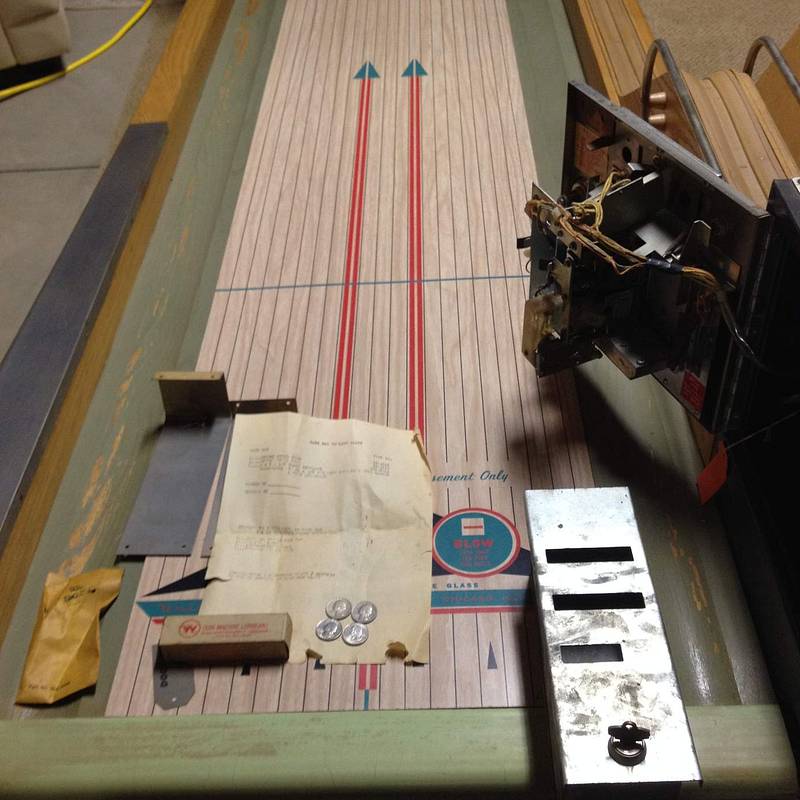 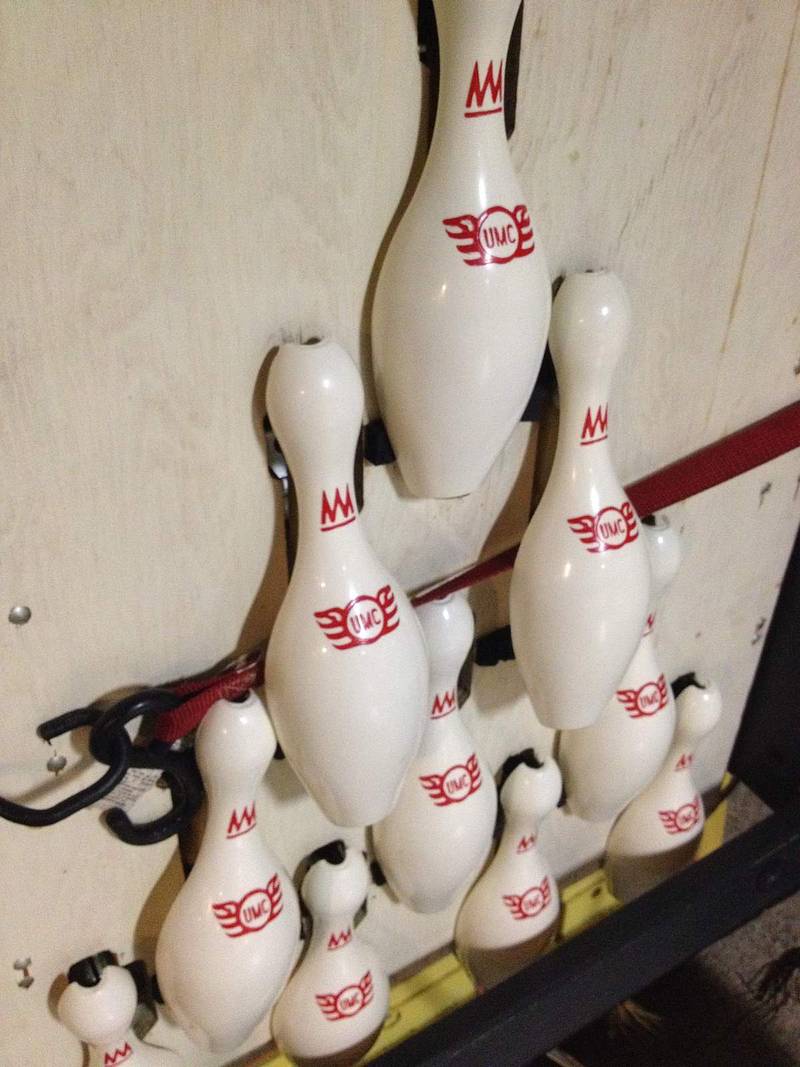 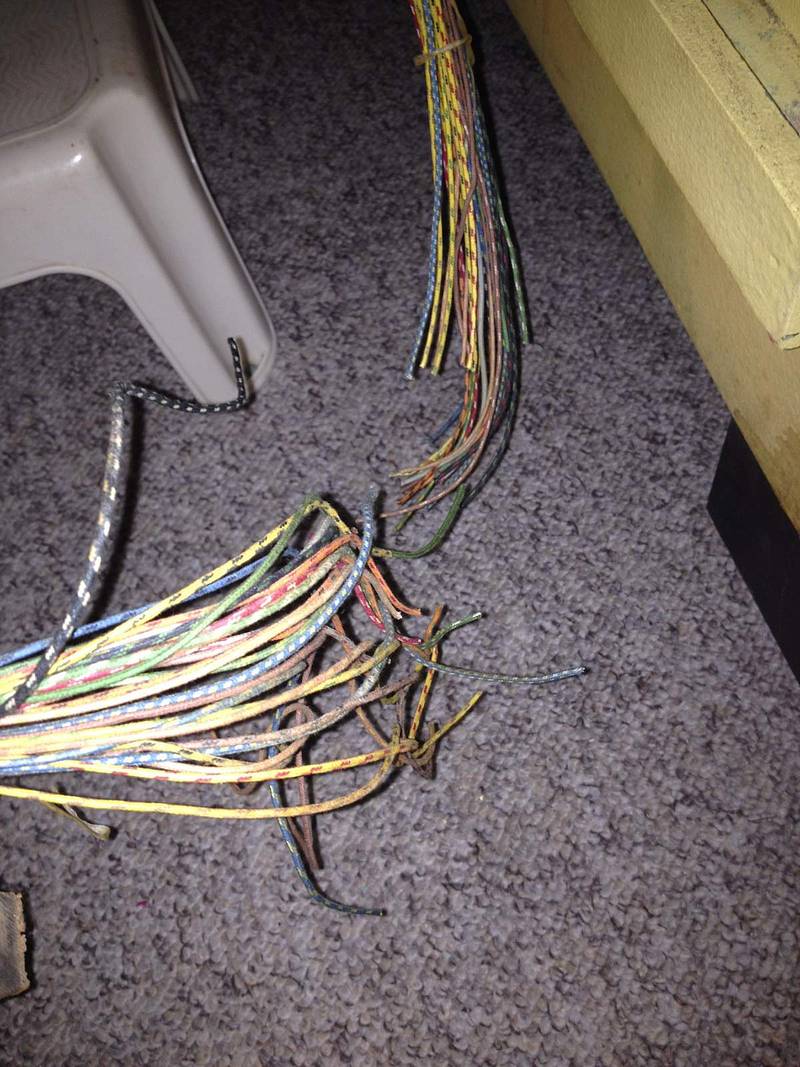 Opening the back, pin hood, and lane access was a bit intimidating, so many switches, stepper units, and relays, but armed with the TOP ball bowler video and a lot of patience, the work began...I keep telling myself that I really don't like bowling, seriously

Off to bed now, more progress in the next post.

The machine is like a time capsule, every manual, schematic, and typed instruction sheet is in place.

^ This will help immensely in speeding up the repair process.

That's a beauty right there. As far as the cut wires go, you got it easy compared to most. Often you cannot tell which color is which on the cloth covered wires on these older EMs. I'm working on a project 1958 woodrail pin with cloth covered wires where the reds on the wire markings are so faded they are grey.

Good luck! You'll learn to like bowling, or you'll just have fun watching others enjoy your bowler.

That’s is gorgeous, enjoy it I love mine.

great story. Looks like a fun project and will be a great machine once it is up and running again.

"so that's what those board things are! Let's get it unloaded."

I have to admit, the price was astoundingly less than I ever anticipated. Was happy right where we stood

I had spoke with Dr. Doom a bit when researching Big Ball Bowler options and he was very generous in sharing with me. I knew that I had at least 40 experienced hours of work ahead of me, so for my very green education, I planned on at least doubling that.

The first order of business was to fix the obviously damaged harness, so with iron in hand, I sat down for a 90 minute solderfest. It actually went very smoothly, as I did not have to do much interpretation on insulation coloring to get them to match up well. 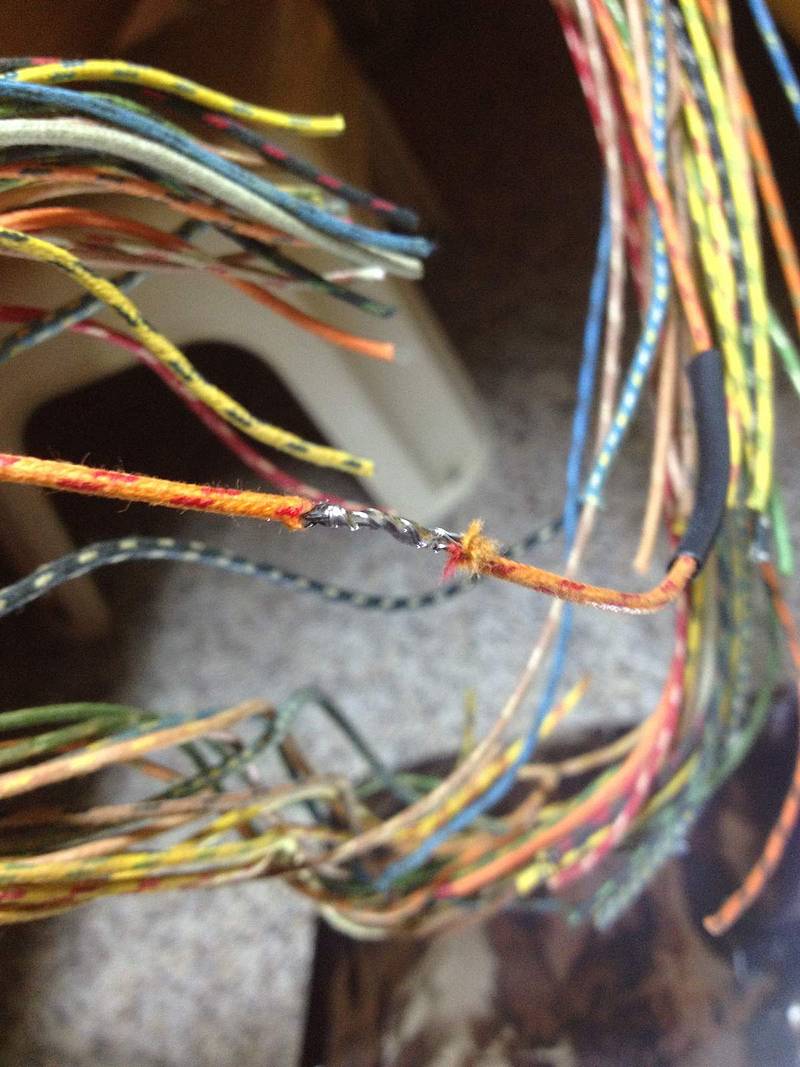 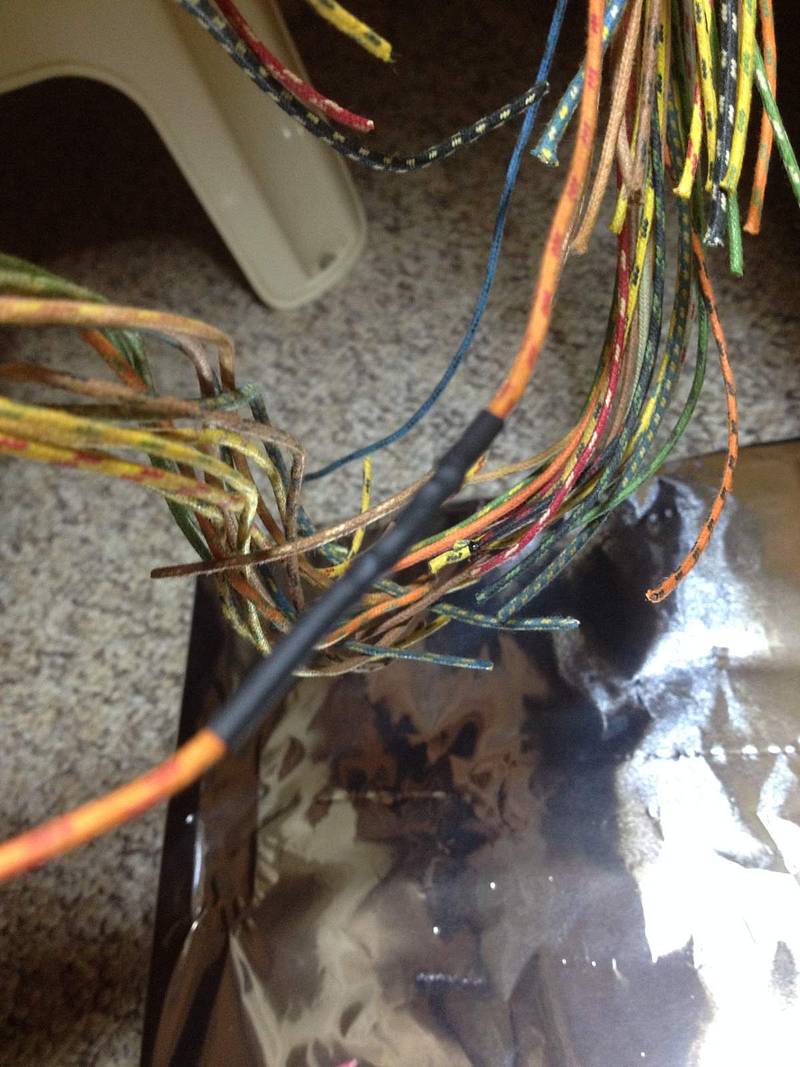 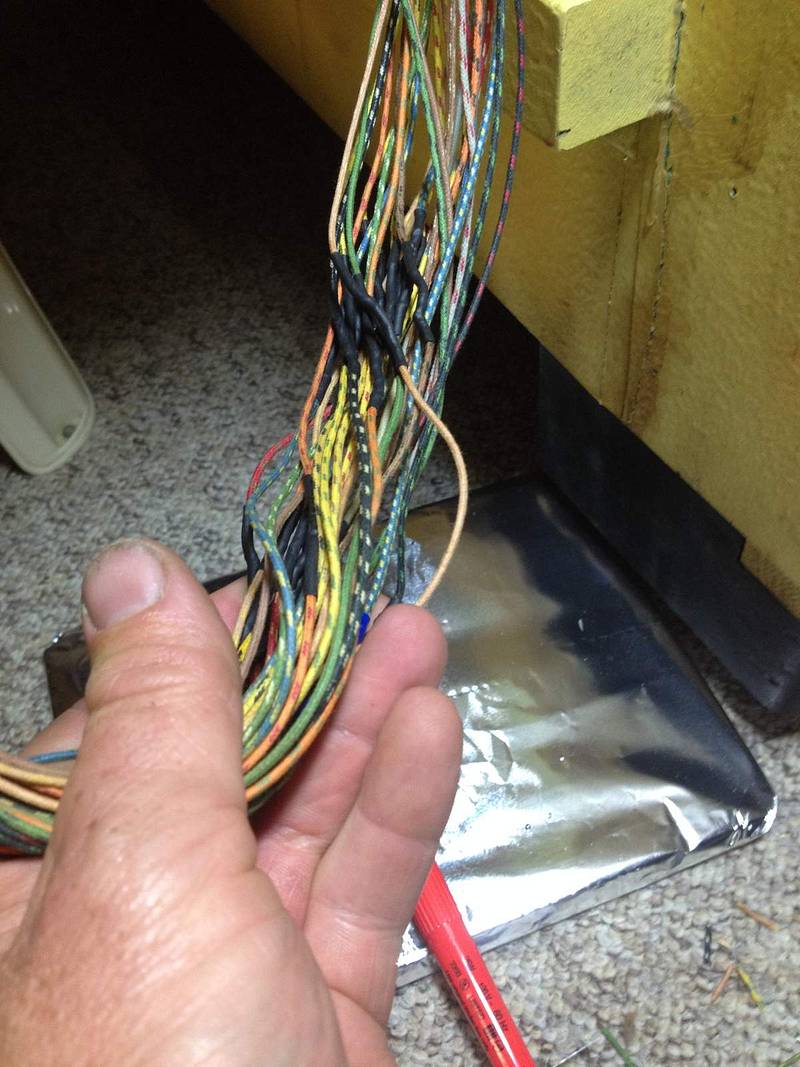 IMG_2508.JPG
I adopted Clay's methodology of working through the back box systematically, then on to the pin unit and finally the lane switches. 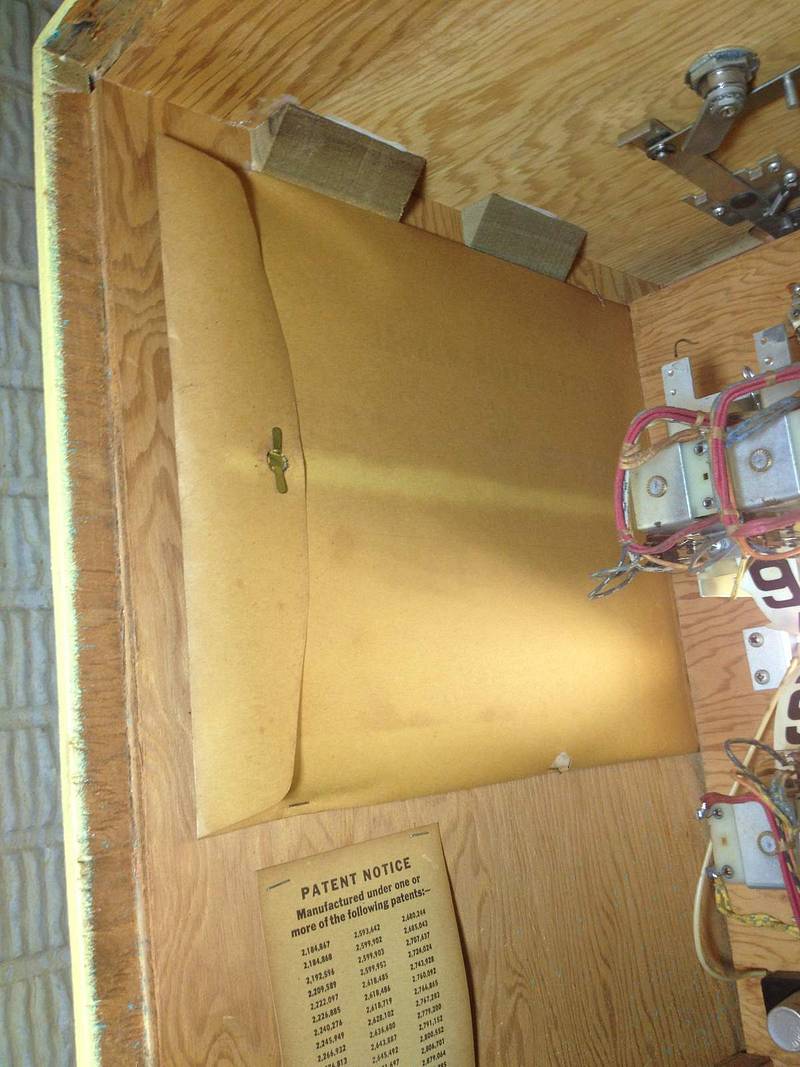 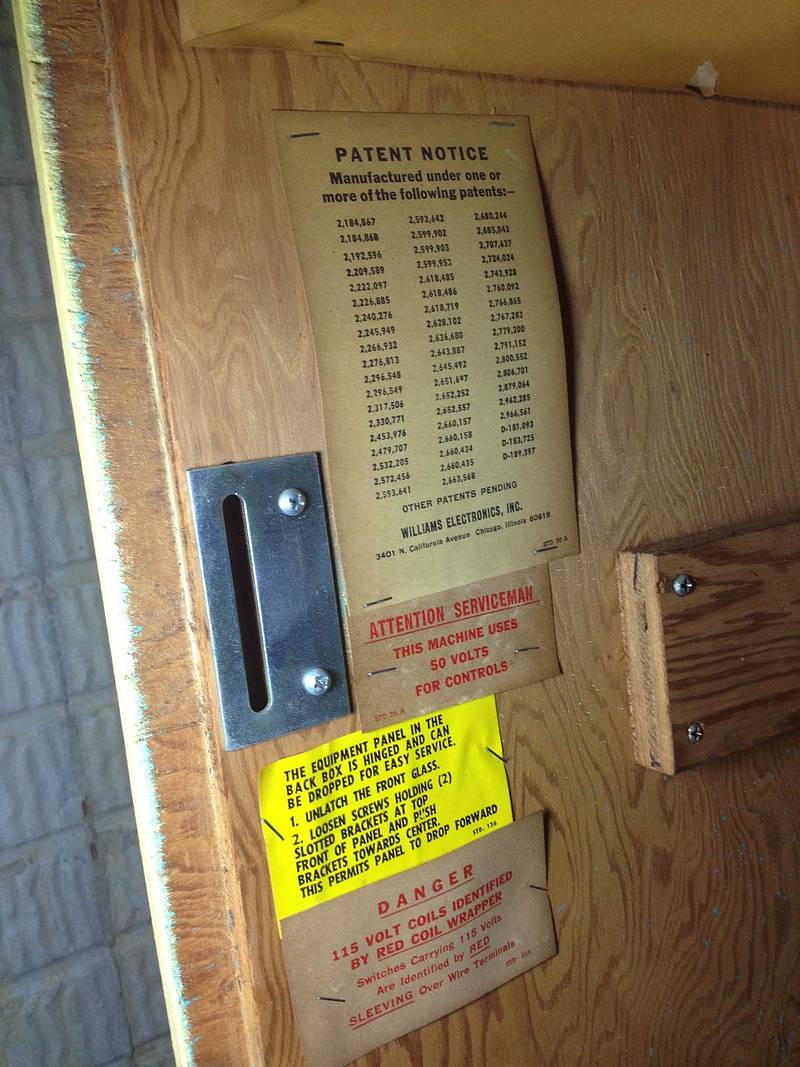 Everything was just plain sticky or firm due to 44 years of solidified grease.

I removed every stepper, cleaned and lubed each one, and gently put them back together. Hesitant fingers in the beginning gave way to confident movements by the end of the process. A huge benefit was that all the original factory paint markings for the start positions for each unit were still bright and visible, no springs were broken or molested, and if not for the dust and grease, looked like it had just rolled out of the factory. 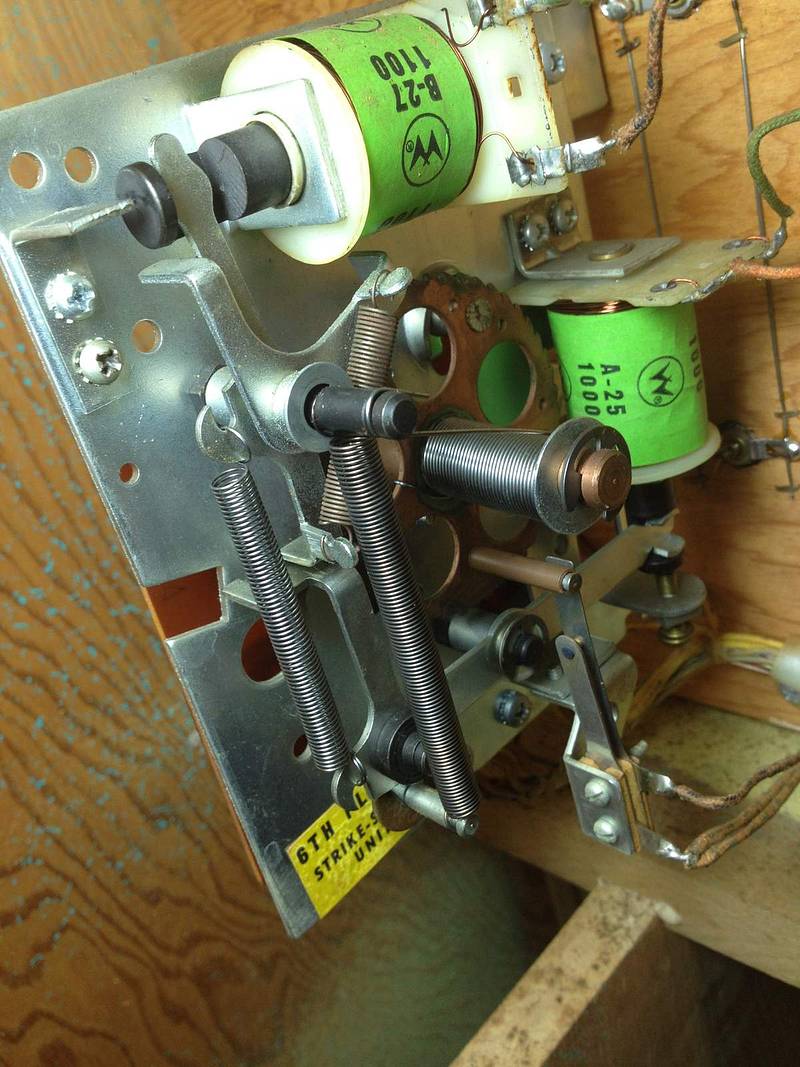 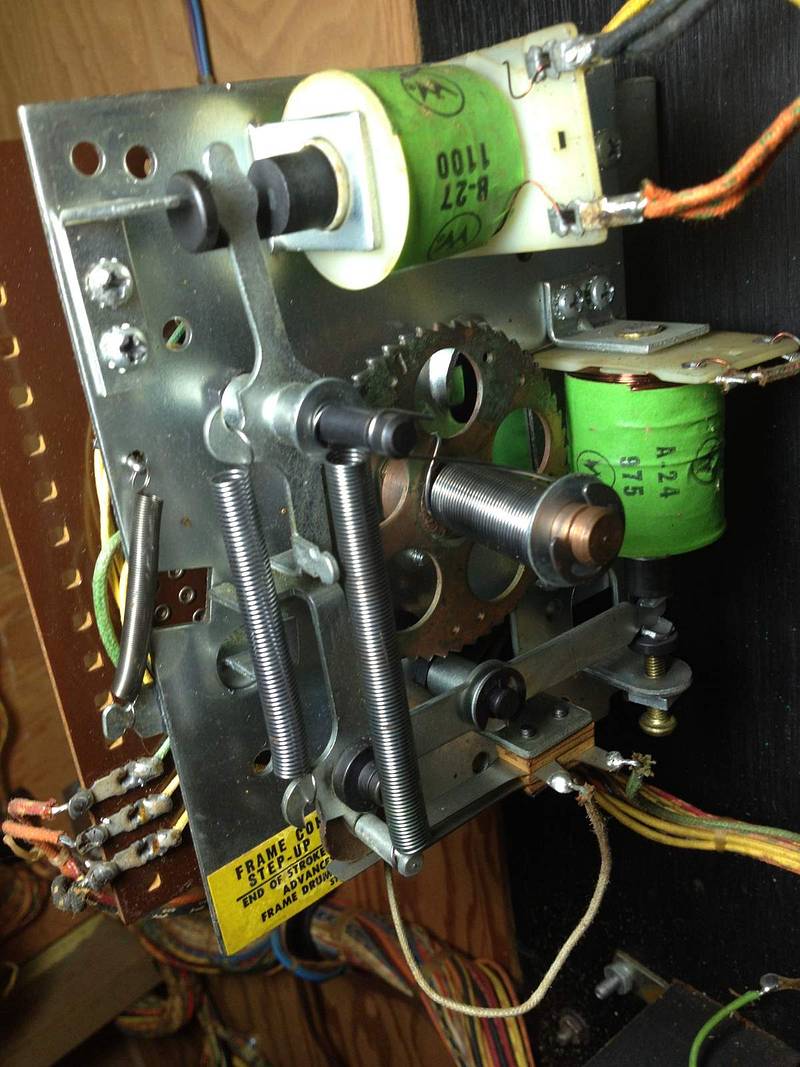 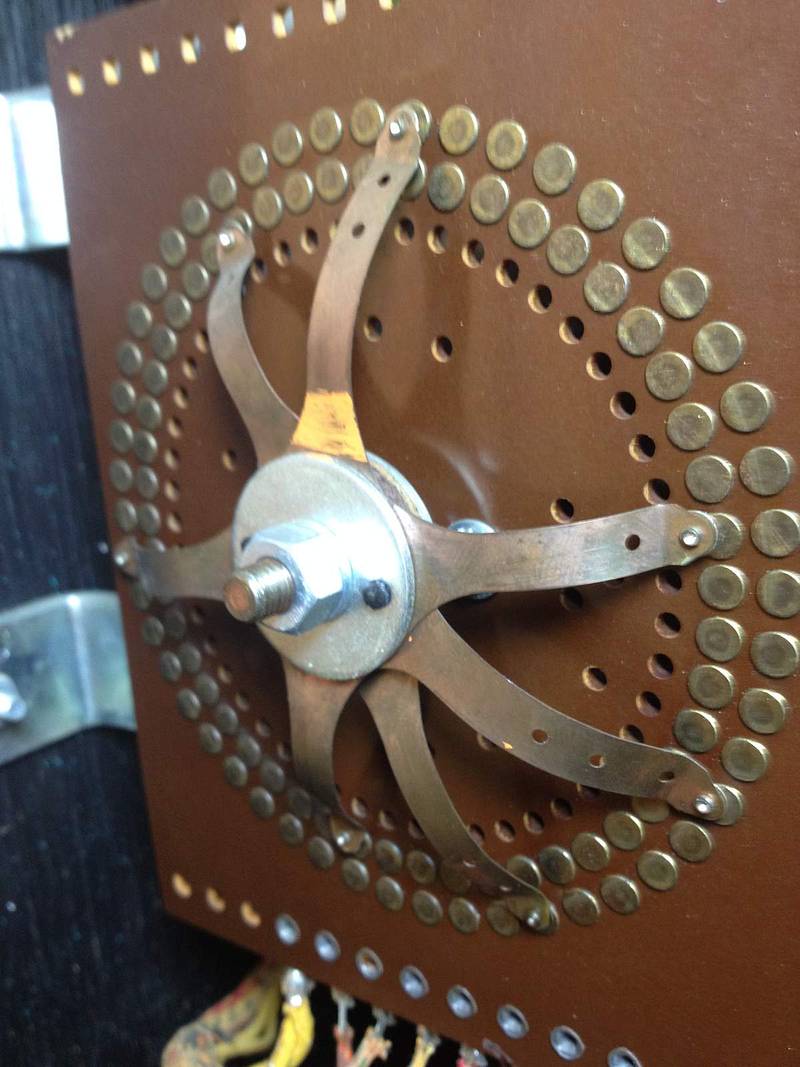 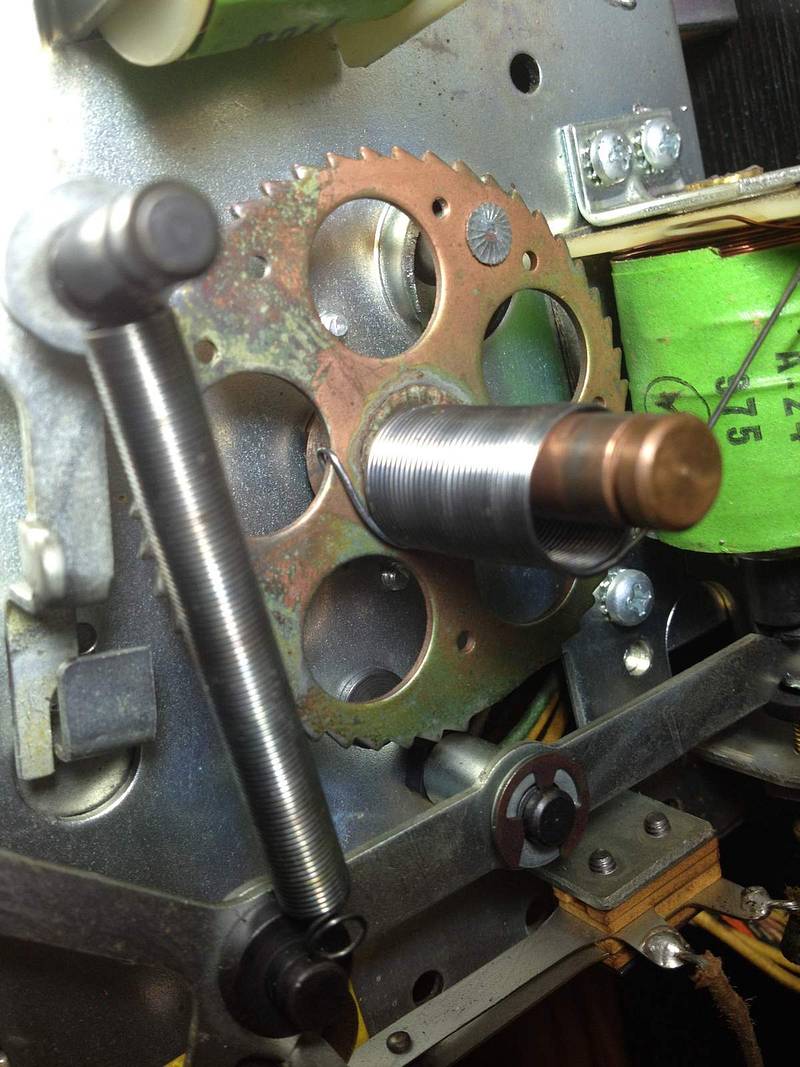 IMG_2695.JPG
The score reels for players 3-6 were particularly frozen, requiring dis-assembly, de-greasing and lube, and finally a good rubbing with Novus to take off the evaporating grease. 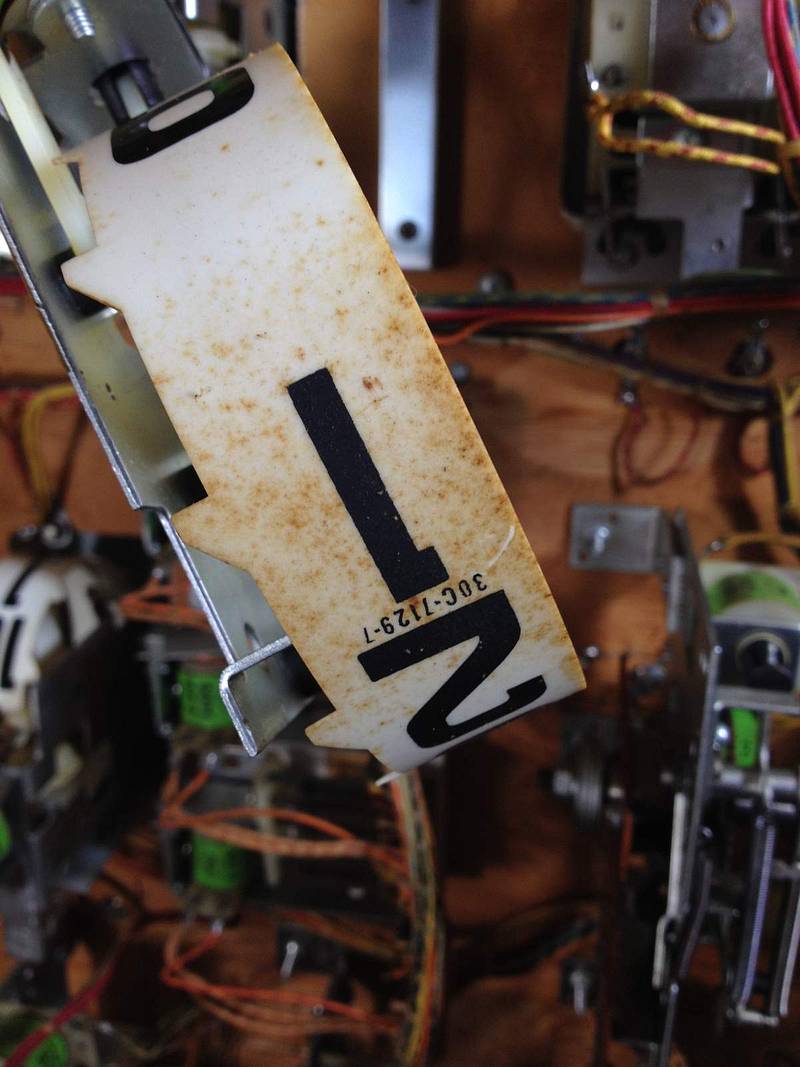 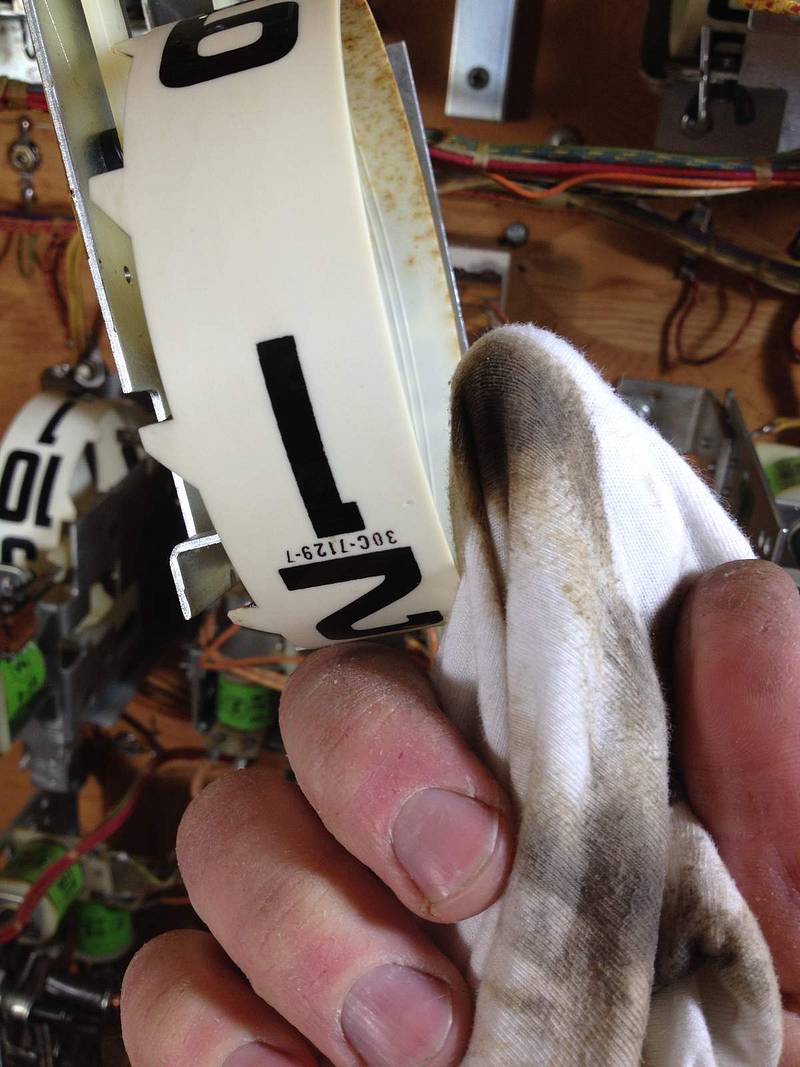 Once I was all through with the backbox, pin unit, and lane switches, I turned it on to see if she'd play. I was met with a unearthly screeching coming from the ball return unit.

A quick exam showed more of the same...icky, sticky, gummed up grease. 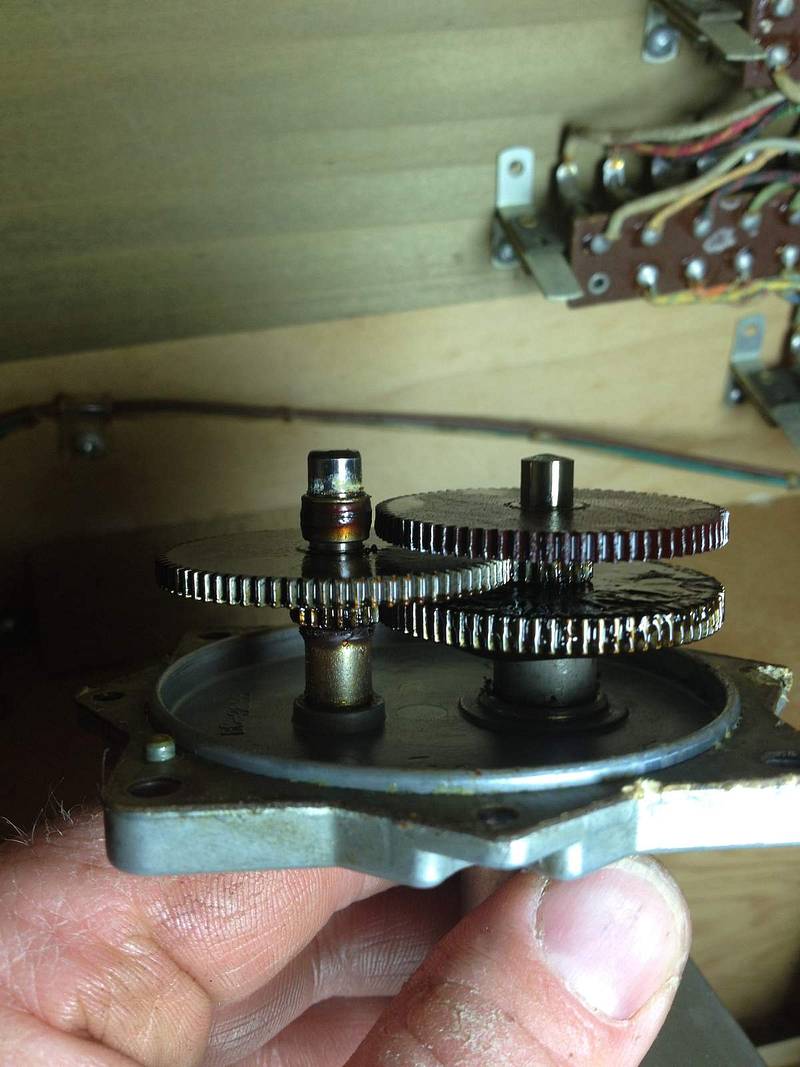 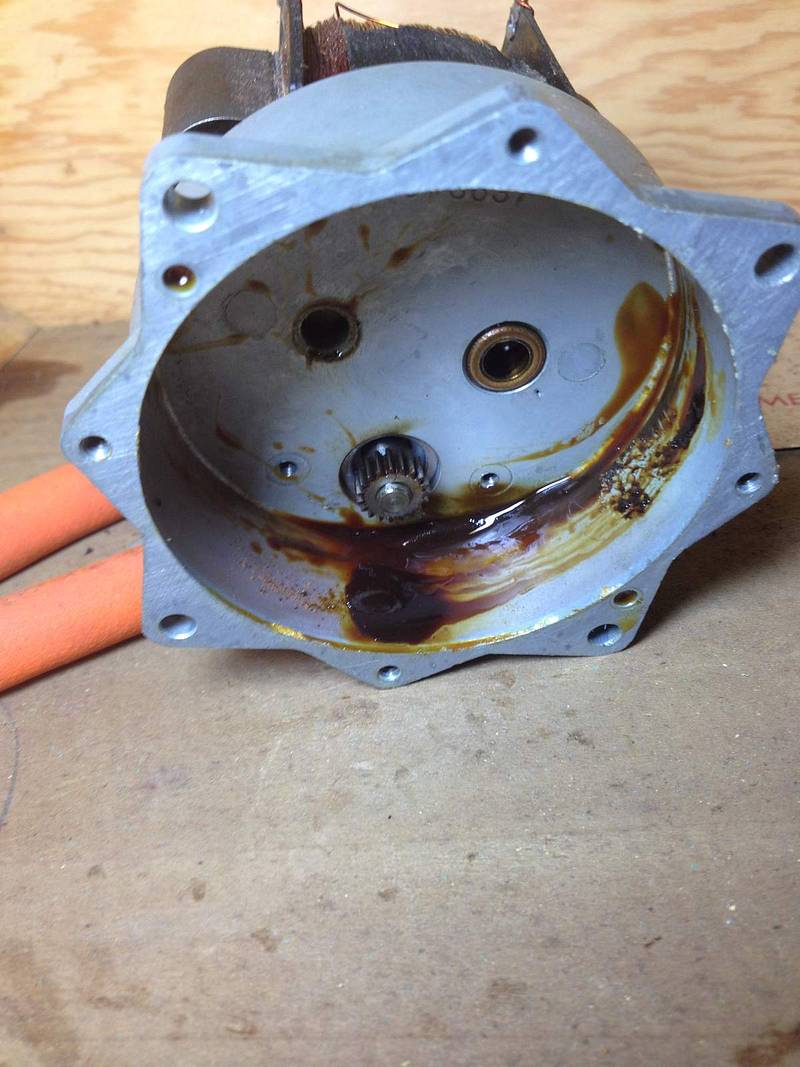 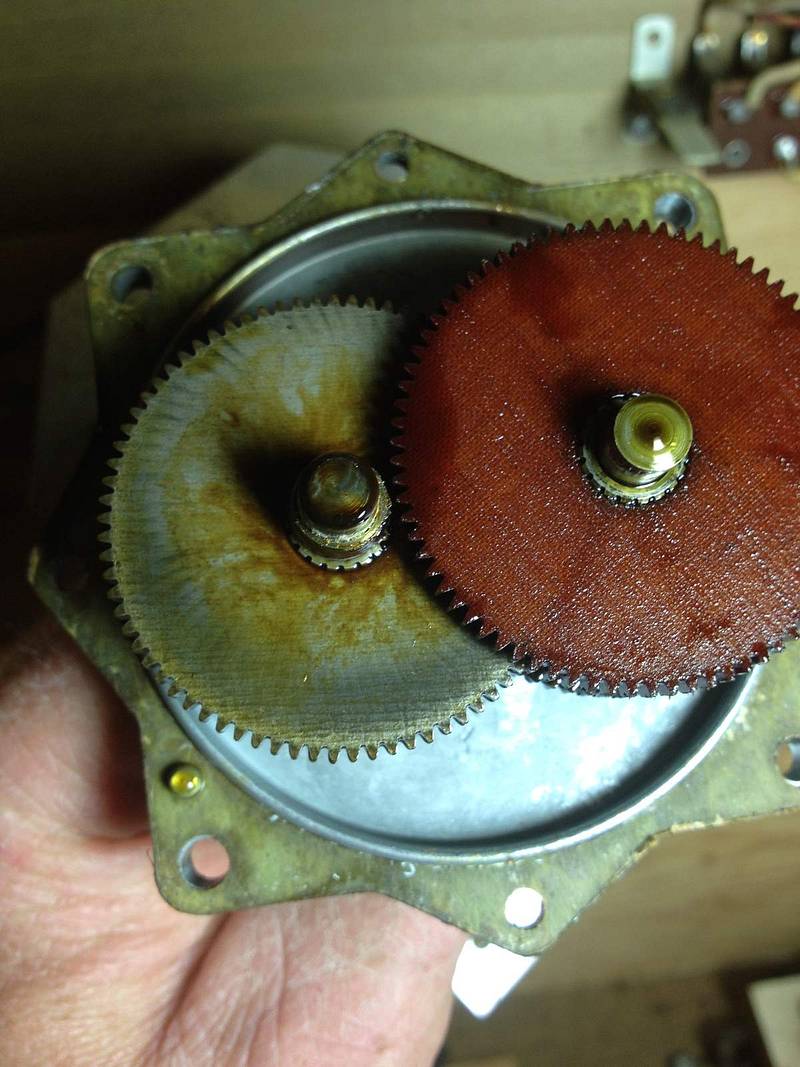 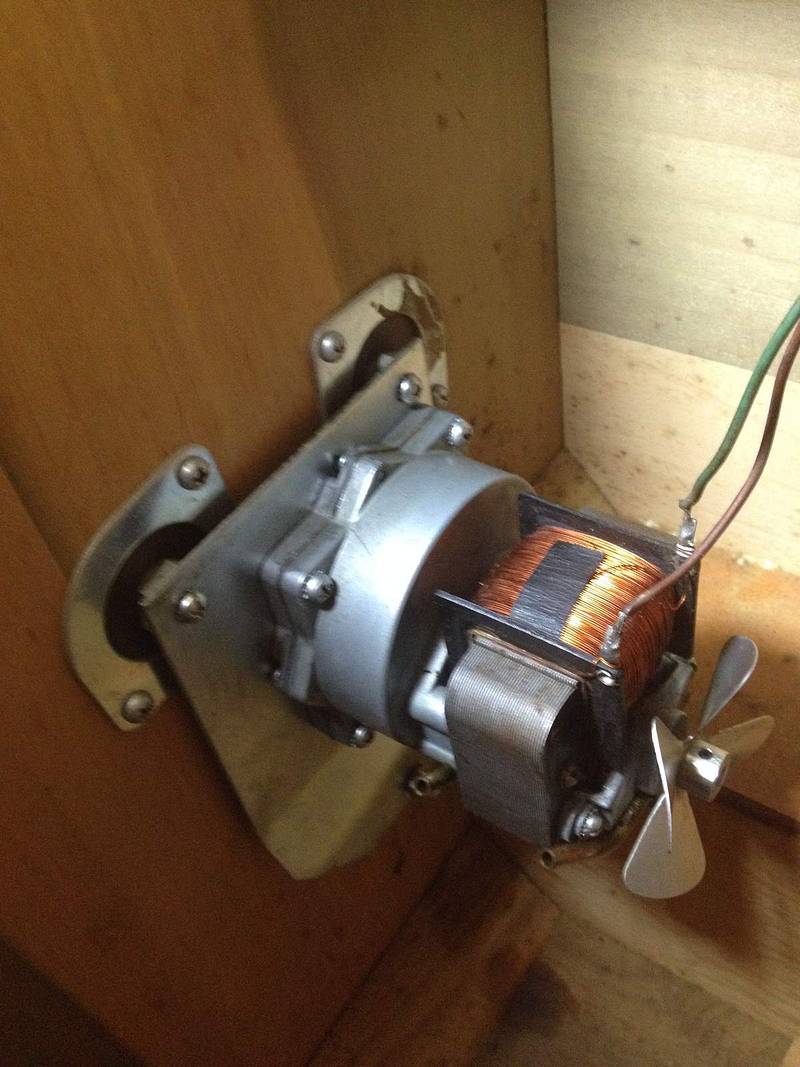 After only 32 hours of work, she is shining and playing almost 100% 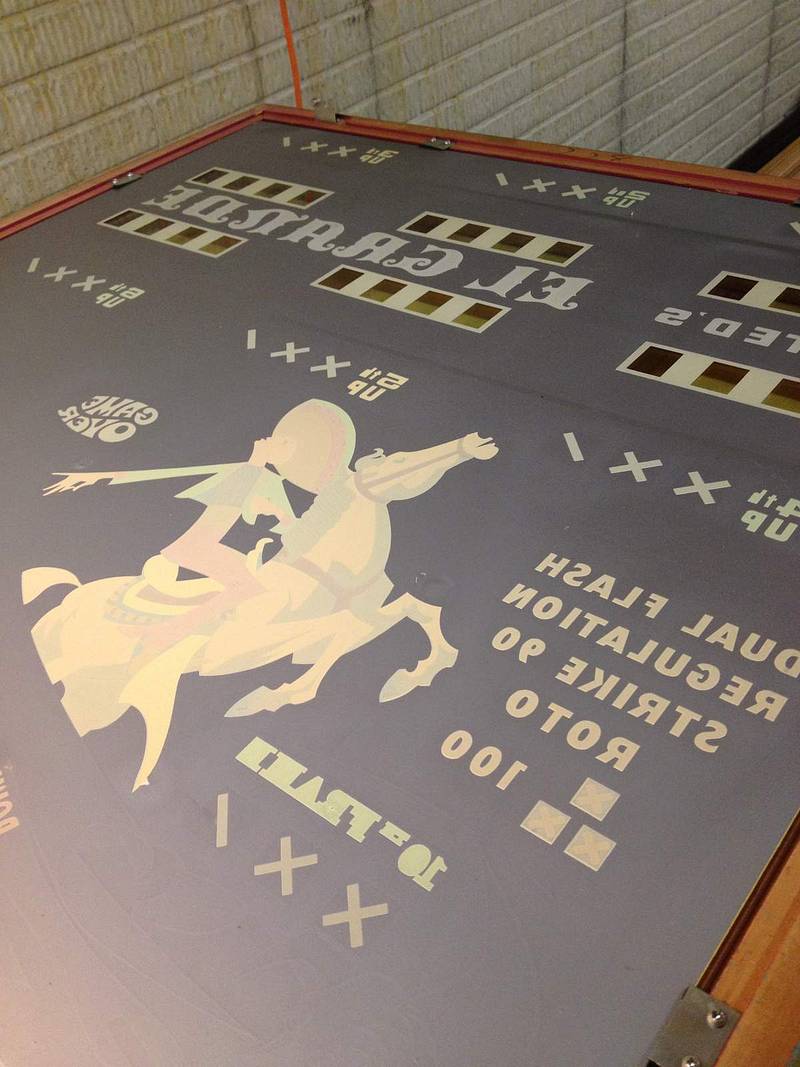 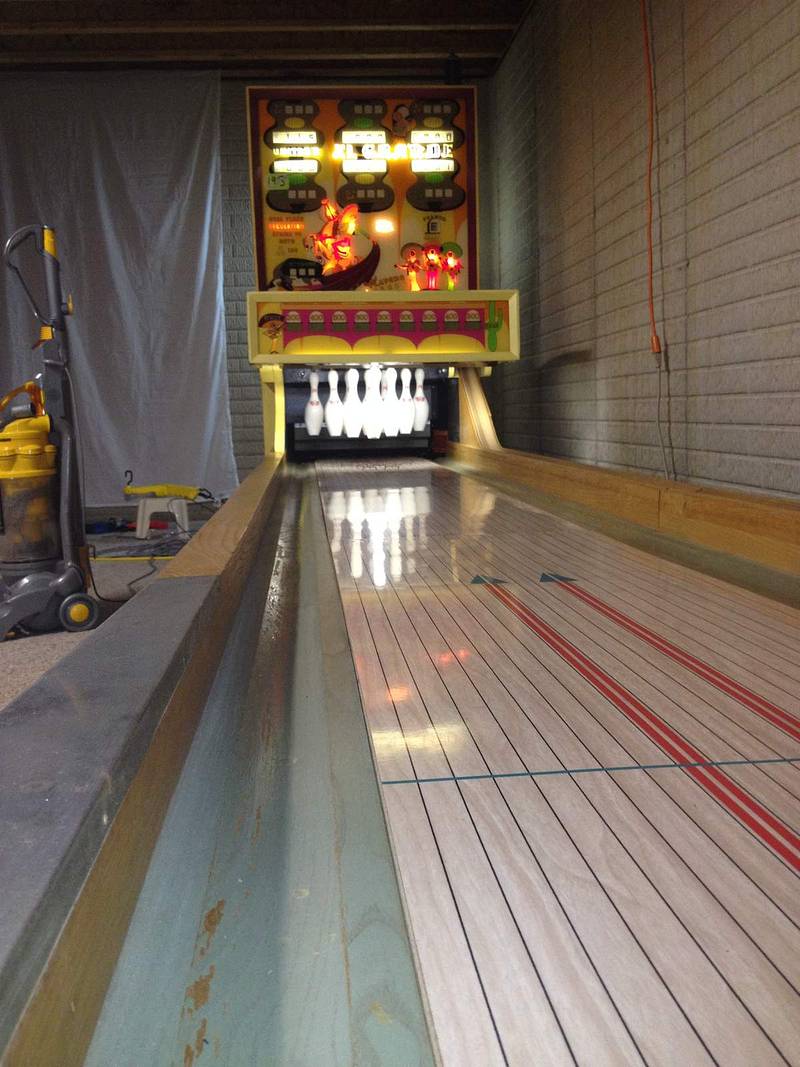 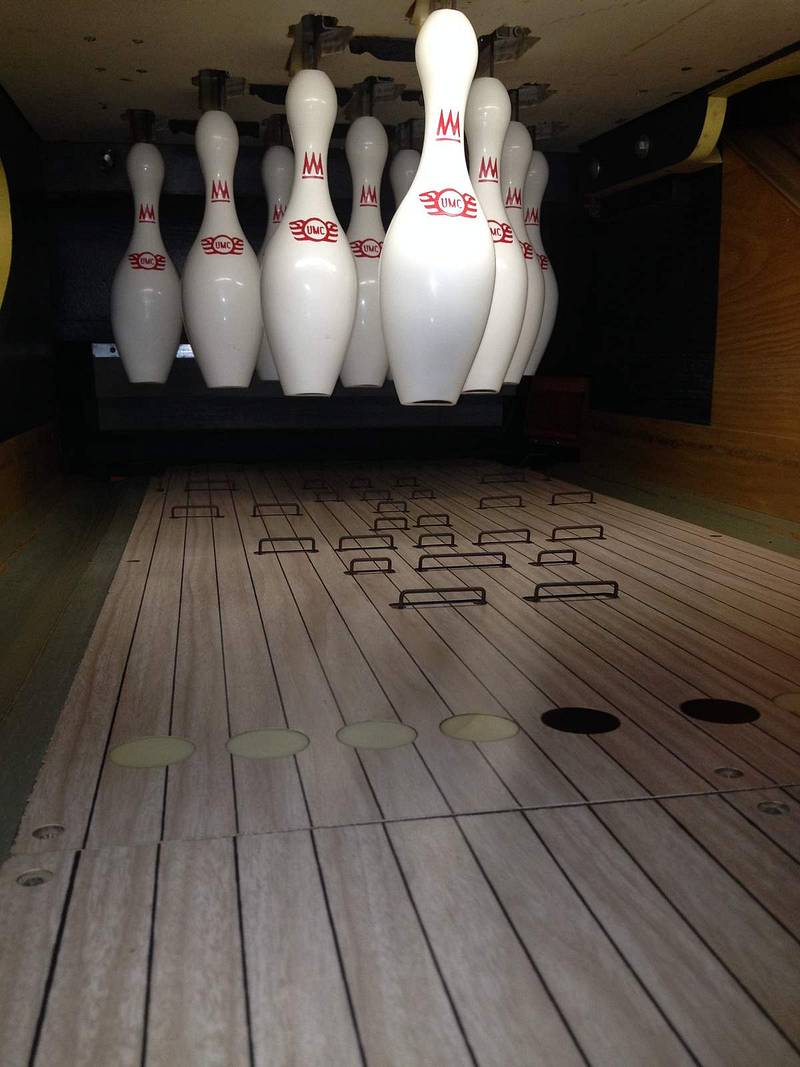 The family is having a blast with it and I actually enjoy bowling, who'da thunk?

Only issue still outstanding is scoring for ROTO and Strike 90...despite my best efforts, I cannot find out why these do not register as indicated in the manual (90 for a strike, 60 for a spare, 0 for a blow). Regardless, she's pushed back to enjoy for the Holidays, will revisit the scoring at a later date.

That looks great!
Would love to see a video of this one in action!

I worked on a big bowler like this (ABC Bally Bowler) and aChicago Coin Skeeball and really enjoyed the challenge. They are such cool games! Hope you get the Roto scoring fixed....but when people play it at your house, they probably won't even care!

Nice job on the bowler!

Would love to see a video of this one in action!

Jodini...I'll see what I can do

Rody - do you have any more pics you could share of the whole bowler? Or a video? How have you been enjoying it the past couple years??