Hi, hope someone can help me with this. I have a 1961 William Ten Spot that has a stuck first Reel, 1 point relay and selection unit, which are all holding and buzz. I have gone over all Steper units and cleaned them, I went over every target, pop bumper, roll over etc, and nothing appears to be stuck on top and under playfield. When start is pushed it goes through the reset cycle, score motor starts, reels reset, Game relay (this is the only other relay I see that trips, is it supposed to?). Then the score reel, the 1 point relay and selection unit engage but do not advance or release until the power is turned off, when power is turned off it register 1 point, when restarted it resets and this goes on and on. I have disassembled the score reel and cleaned it, the coil in it is not the correct coil, I am not sure if that can cause the issue or if it is something else. I am hoping someone can offer some assistance I am not great with EM's

Sounds like the EOS switch on score reel is broken or not opening .
Yes game relay should engage .
But if this happens ( Score Reel Locking on ) as soon as you have started a game , It could well be a 1 pt switch stuck closed on the playfield , behind one of the rubber rings .. Remove plastics and look at all the 1 point switches ,
Make sure they are not bent or being held closed by a rubber ring ,
and at least have a few mm's gap between the contacts ... good luck

Try unplugging the play field plugs, and see if it stops

Ralph67 and Dr_of_Style thank you for the advice, im gonna try removing the plastics,move been trying to avoid having to remove them since I just put it together, I checked them and they looked fine but I really can't get the best look while they are on. The plastics are warped, so it maybe pushing the switch back. It does stop when I unplug the playfield so it has to be something related to points registering but it could also be the 1 point relay as well, right?

Check the switches on the underside of the playfield for the rollover buttons as well. You'll want to inspect anything that scores 1 to 5 points basically. Another thing that can happen is a set of switches can look ok as there is a gap between the contacts, but tension blade between them is touching both blades.

Thank you AlexF I'm going to check them again, I went over those pretty well, I'm guessing its something under one of the plastics though I'm going to start going over them one by one

Yes i think that's the problem you have , Maybe a rubber is pulled to tight and closing one of the switches ,
I don't think it would be a Relay problem
Try talking off the plastic , leave the rubber rings in place and look down at the switches to see which one is causing the problem.

And as AlexF mentioned make sure tension blade is not shorting across , not hard to see if these are bent incorrectly, double check with other switches
It may be better to lift playfield and check these blades from underneath. If you can check them all properly from the underside it could be quicker and easier , rather than removing the PF plastics ,
Good luck with it .
Nice looking game btw

Thank you AlexF I'm going to check them again, I went over those pretty well, I'm guessing its something under one of the plastics though I'm going to start going over them one by one

Hi Molokovellocet
Here, post-3 and post-4: https://pinside.com/pinball/forum/topic/scoring-issue-on-bally-sea-ray I show "B-Section" the way 10 points are given. Your problem is: a switch, type "B1" is faulty closed.
You wrote: "When the playfield is unplugged - the error does not occur.

Ralph67 and rolf_martin_062 Thank you both so much for the advice, that was exactly the problem, it was a one point switch under a playfield plastic, I had gone over them all when I tore down the playfield, but the plastics are warped from improper storage and not being in use for a long time. The plastic was bending the leaf switch in as well as the tension blade was bent a little to much so when I but the new bands on it pulled it in to tight where it was making contact. Every function is now working, I just have to go over some bulb sockets that don't seem to be making proper contact at all times and I just ordered parts to rebuild the flippers. Any of you ever deal with warped plastics? I want to be careful with them since I highly doubt there is a replacement set to be found. After cleaning them with Novus they look great but the paint is old a brittle, I'm thinking maybe remove them, spray the backs with clear coat, after they are dry, using a heat gun to warm them to the point where they are malleable enough then place them between two boards with wax paper under and over plastic and putting some weights on top hoping that when they cool back and sit under the weight they will straighten out? They aren't horrible but one of the triangle plastics on the bottom kicker extends and get stuck at some points.

I added a couple pics in too, it's coming along nice considering the condition it was in and I have put less than 100 into it, I stripped the legs and coin door that were painted red to conceal the pitting and rust, tore down the playfield clean and waxed it, replaced all the bulbs, got new leg levelers and bolts, rubbers and balls etc. next step is going to be a repaint to original specs if anyone knows the colors to use please let me know. It's just like ivory White, Red and has the silver splatter all over. Then I am going to try doing some touch up on the back glass. 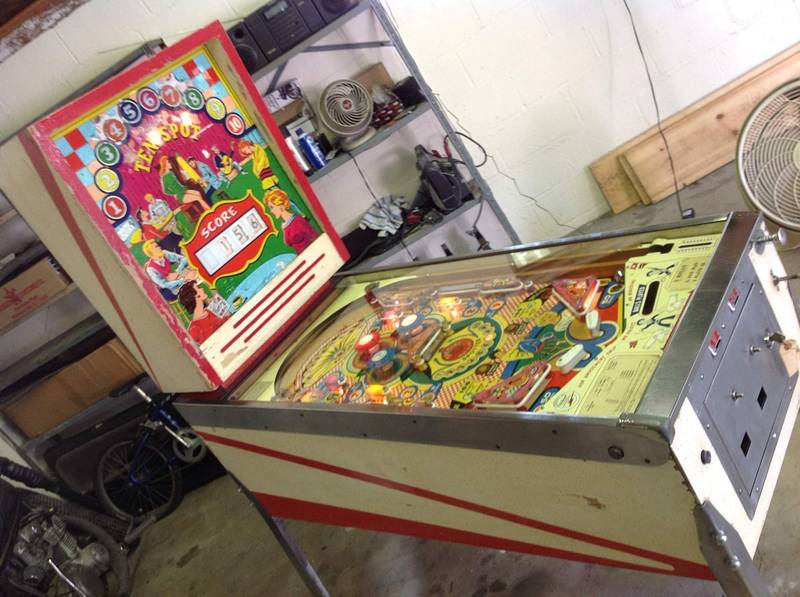 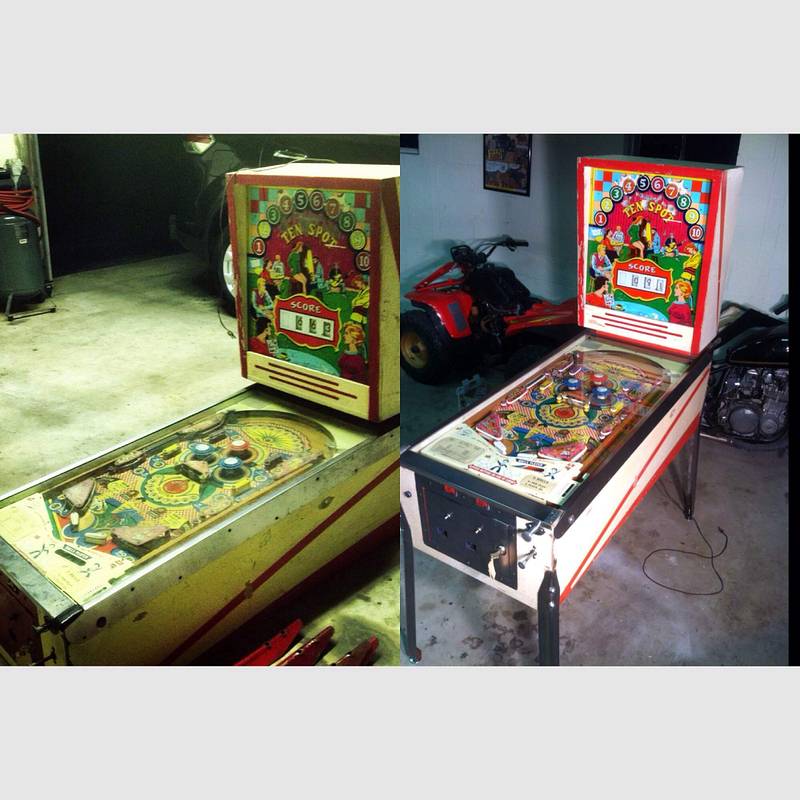 Good you found the problem , happy to help .
I had the same problem on a game i was repairing , Score reel coil locking on as soon as it started a game .
I use a heat gun to straighten plastics , you will see them start to move as the get hot , then they should relax as the heat right up , I slowly work from one side to the other , when they look or feel quite hot , i put them under a heavy piece of wood till they cool off , good luck Nice work on the clean up of the game

Thanks so much Ralph67, I should have pulled the bands and inspected earlier, I wouldn't have wasted so much time. Thank you for the advise, I am going to try the heat gun on them, I did it a little to the slingshot plastic where the kicker is and it worked well but it would be nice to get the warping out of them. And thank you for the compliment, I love breathing new life into the old EM's I haven't owned one in years.

Hi MolokoVellocet...
Another thot on plastics.
I have a few pieces of granet counter top.
I put two in the oven at no more than 220, let it heat up for 15-20 mins.
Then, lay one plastic on top of smooth side, heat for 15 mins.
Then, place the other hot piece "smooth side down" on top, and heat for 15-20 mins.
Remove all together, lay on table and let cool.
Works great!

Dr_of_Style thank you for the idea, I did them all with a heat gun in between two pieces of wood. I put wax paper under them and over them and then a few paving stones on top of the upper wood. It worked pretty good, the sling shots came out perfect, but I tried to do the other 5 of them together and they cooled a little quicker so they look good but could have been perfect. I will have to try you way, seem like a great way to get them all perfectly flat.

Just be careful with the oven method . Dont forget they in the over! .
Another pinsider i know here in Perth , well he forgot they were in the oven and overcooked them .

Now he has a set of bubbled plastics on his game .
I use a piece polished stone picked up at a local monument / stone polishers works, heat them on the stone top with a heat gun then i place heavy timber or another piece of stone on top on till cool .
I will have to try the method Dr of Style mentioned of Heating the stone up in the over first , great idea ...

Ralph67 exactly, I would watch them like a hawk, I worked so careful on them, when I heated then and placed the wood over them. I figured the wax paper would help to protect, and not stick. Last thing I wanted was to melt the plastic, when only like 900 were made and the plastics will not be available.