Okay,
I just discovered that two of my early woodrails, Crossroads and Coronation do not have a 10,000 bell, but do have a bracket behind the stepper unit which looks like its incomplete. Do any of you have a photo of how it should be set up, or know whats missing? 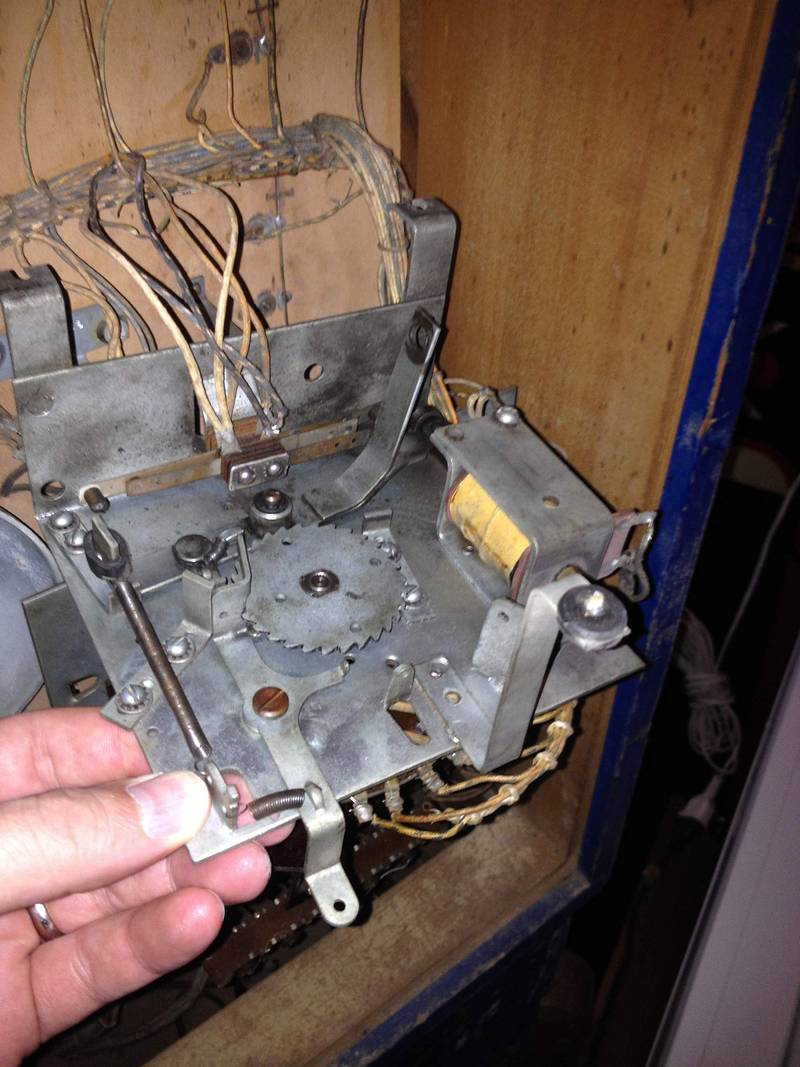 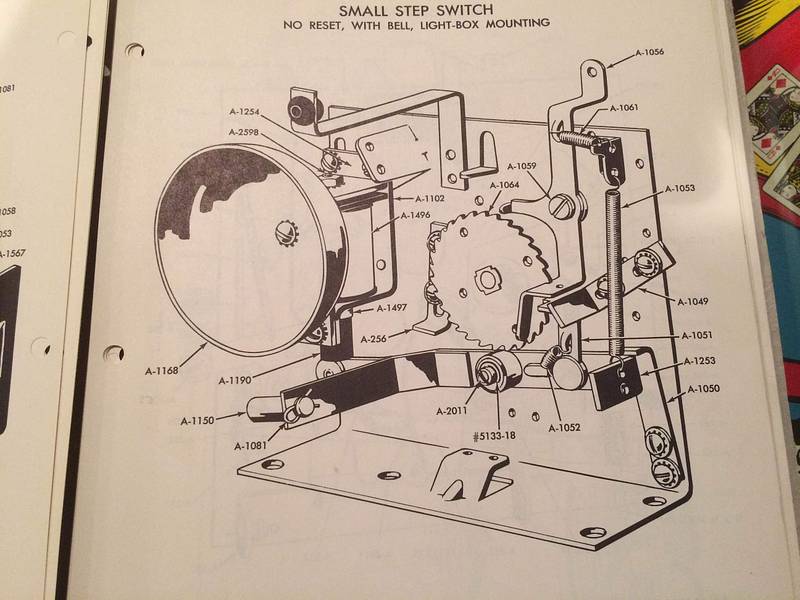 Dirtflipper does it again! Thanks!

And looks like pbr have the drive arm I need

Resurrecting an old thread because I have a similar question.

I, too, have noticed that some of the early woodrails do not have a bell. Two of my games were missing either a bell, or the striker (A1150) in the previous thread. Looked similar enough to Robo1's. Easy enough to fix since the bracket that holds the coil has a screw hole to attach a bell to the bracket.

So, I'm investigating the "silence" on one of my machines and I disassemble the stepper unit and notice that the bracket that hold the coil does not have a hole for a bell. Curious, then, were some made purposely to NOT have a bell? Also, why are so many missing? 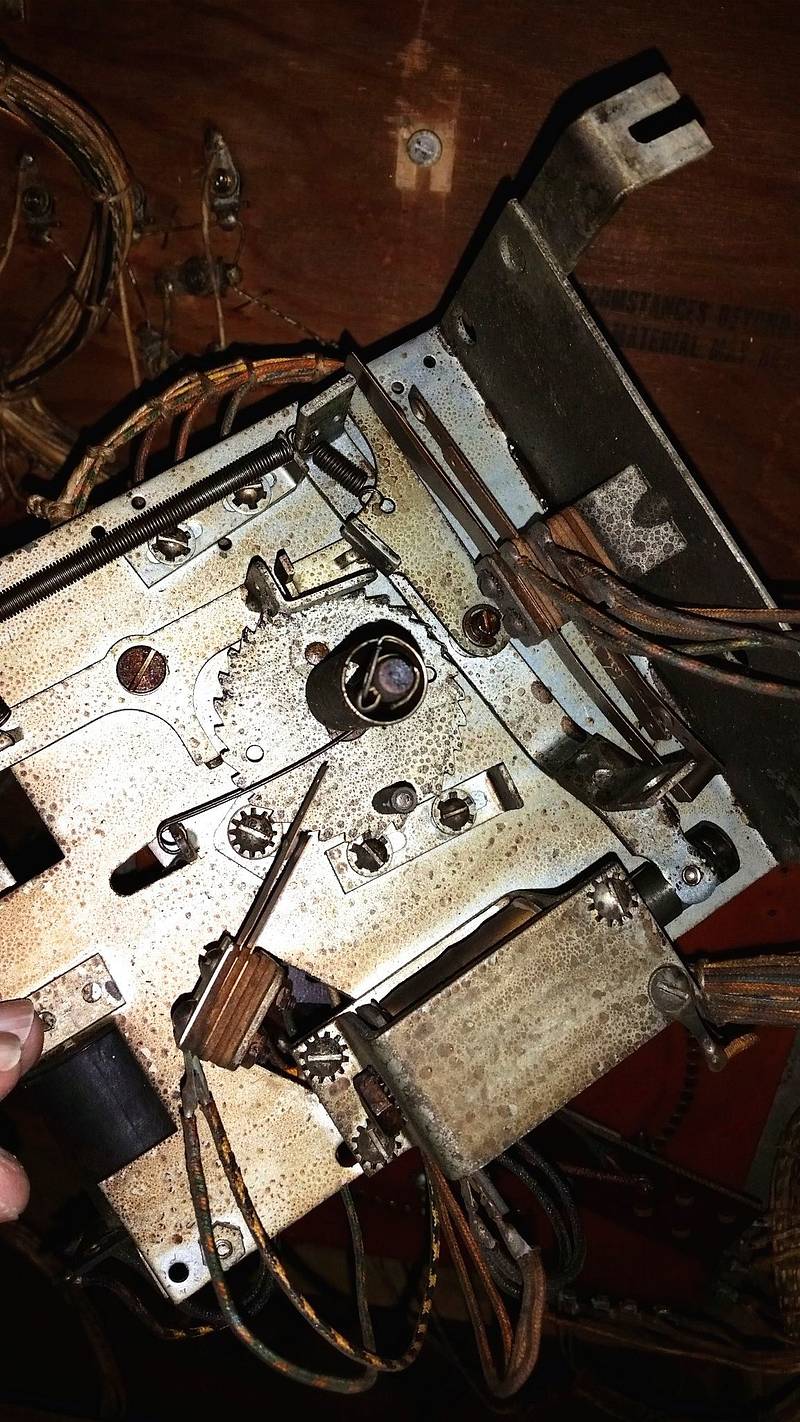 Many bells were removed to make the game quieter in some locations or they were taken out to put in another machine that was missing them. On games where the bell is not mounted to a stepper unit, many had them as a separate assembly.

That is not the 10K stepper unit. I can tell that because of the limit switch in the path of the pin on the gear, the return torsion spring, and the tooth filed off the gear wheel to stop it from stepping when it reaches the maximum forward position. If this were the 10K stepper, it would be a continuous forward stepper and those three items would not be there.

This stepper is probably for points, or some other step-up & reset feature on your game. The reason there is no screw hole for the bell mount on the coil case is because this stepper is not supposed to have a bell. During this era of game, GTB typically used the same drive arm - one that had a bell arm attached - on all their small steppers, even when there was no bell. That's why you are seeing a bell arm on this one.

There should be another small stepper mounted on the head insert. That will be your 10K stepper unit, and it definitely should have a bell on it.

Thanks for the replies

My mistake was not specifically identifying the machine as a '51 Rose Bowl and calling the stepper a "10K" stepper. In this game, 10,000 points aren't scored each time a bumper or roll over is hit. What does happen is that an animated football is advanced across the playfield on the glass in 5 or 10 yard increments. The game scores touchdowns, not points or high scores.

So, it is factory correct that there is only 1 five inch bell for the touchdowns. Appreciate the thoughts.

Here's the animation in action moving in 10 yard increments. 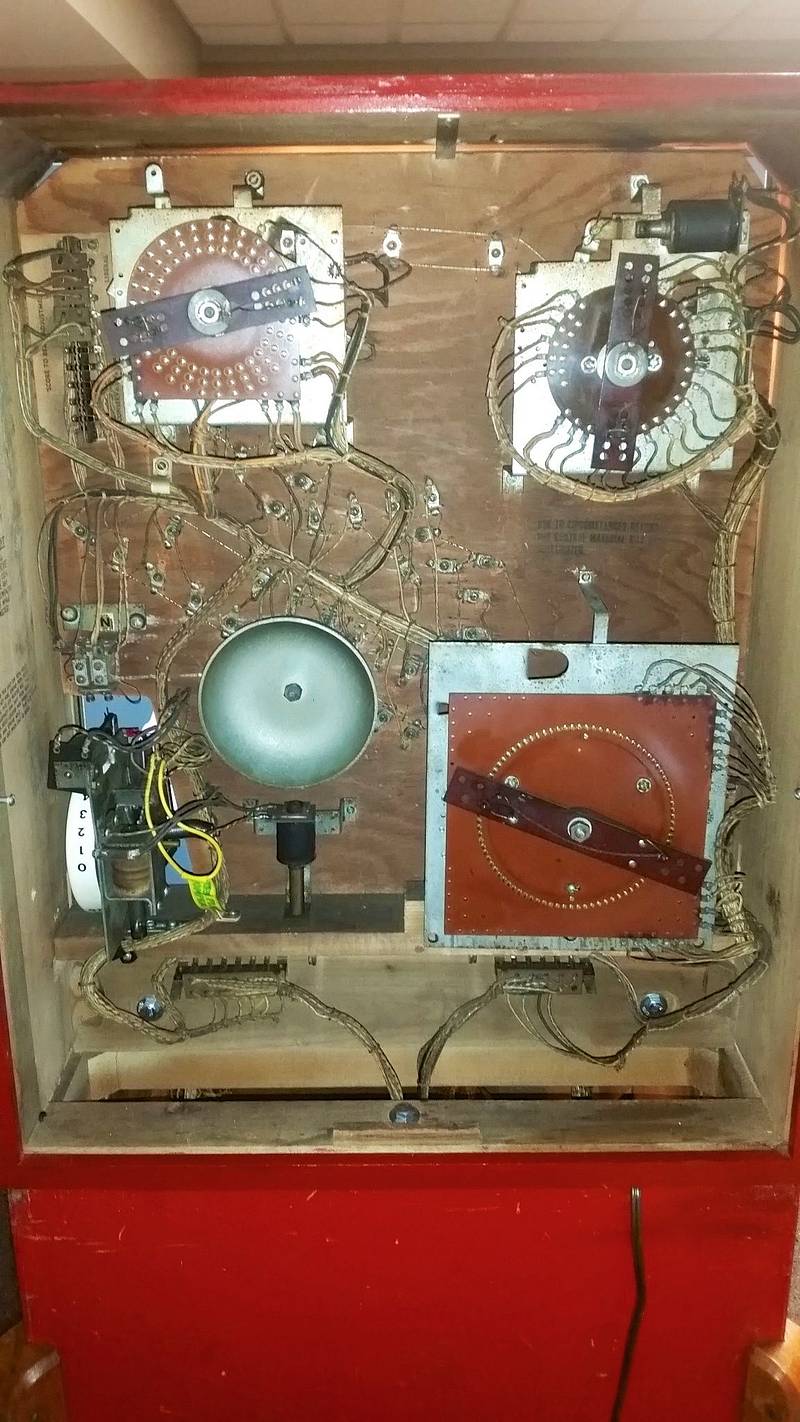 My 1950 Four Horsemen has no bell on the 10k stepper - I asked around/other owners. Definitely factory to not have one.

1950 was a pivotal year in that it was the year the knocker was introduced and so some titles have them and some don't, and it doesn't seem to quite go in date order.

Love the animation Joel as the ball goes up the field

Rose Bowl is a cool game, I recently had the opportunity to rebuild one. This game has no traditional scoring at all! The only other GTB woodrail I know of without scoring is All-Star Basketball (1952). These games were before my time, so I sometimes wonder if the players of the day were put-off by the absence of traditional scoring.

Also I agree Shapeshifter - from what I've seen, by 1952 all GTBs with a 10K stepper unit had a stepper-mounted bell.

1950 was a pivotal year in that it was the year the knocker was introduced and so some titles have them and some don't, and it doesn't seem to quite go in date order.

As far as I know, the knocker was introduced in 1948 as I have had two from that year that have one.

As far as I know, the knocker was introduced in 1948 as I have had two from that year that have one.

I recall seeing a small knocker unit in the head of a late 1930s pre-flipper machine. It sounded for scoring (not replays) and was positioned so that the plunger would strike directly against the inside wall of the cabinet.

Even in the late 1940s, the knocker had not yet become the "replay" sound. I've worked on several of the late 1940s Gottliebs - Barnacle Bill comes to mind, for example - where the knocker was used for the bonus count. On these machines, replays are added without any accompanying sounding device.

Yes my 1948 Buccaneer has a bonus scoring knocker. Ali Baba's rattled so much, it was silly. One of the reasons I let that game go. There isn't one on Lady Robin Hood so I figured Olde King Cole was the first Gottlieb to have a knocker as the flyer for that game says-
NEW "DRUM-ROLL" SOUND EFFECTS! Same feature advertised on the Ali Baba flyer. I can't tell you when other manufacturers first used a knocker or which game first used it for a replay.