○ Some Flipperless just came up on CL / E-bay ○

Hmm, Pewaukee isn't too far from me. Price is right but what's up with that red paint. Well, I guess that's why the price is right.

They called that a Wisconsin roll down cabinet. Made to circumvent some type of gambling law by removing the plunger. Which is odd because I thought the plunger made it a skill game? Anyway I wonder of this one has traveled that far or if other states also had those laws in place. Like NY with the AAB laws. 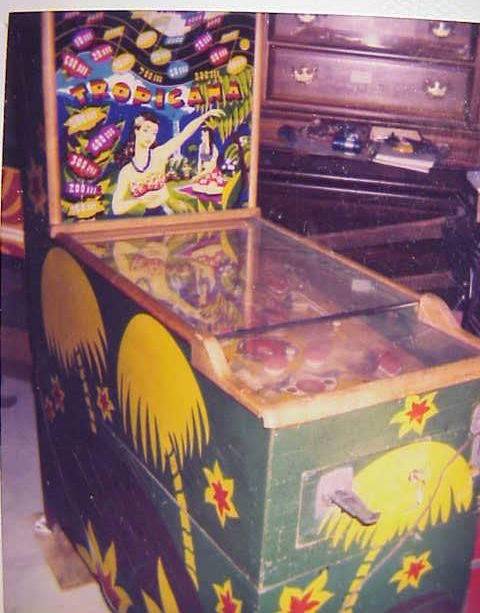 Here's a neat one.

This one I wonder?

Haven't seen one of these in a while:
ebay.com link » 1955 Genco Champion Baseball An Arcade Classic

Very cool, but would be challenge to find all the pieces needed to bring it back.

Has the wrong legs too.

Is this your's Joe? That is a sweet deal.

Wow, this one looks pretty cool.

Photo is from the IPDB.

Yes, I noticed that too. Maybe it's the same game as he references the IPDB? Or maybe he's one of those guys that borrow pics? That's never cool but on the upside maybe this one has the correct coin door.

Possibly. But I would think that he would have posted all of his photos in his Craigslist ad if that were the case. I contacted him to see if it is indeed a photo of HIS game.

Alex,
please do not post things like this while i am in a buying freeze.
Thank you
Jeff

Ha, I hear you Jeff. I'm thankful it's far away so temptation can be avoided.

I just put my Baby Leland up for sale.

Fortunately I think Genco made 4 uprights if you don't like clowns. A friend once had them all and was starting to complete the Bally uprights. It was neat to see them all lined up together.

Here's a "400". A bit overpriced I think?
fayetteville.craigslist.org link

Tom Taylor has one of the coolest pinball collections I have had the privilege of visiting. It's been a few years and he is always changing things up. So not sure it's still relevant. Anyway he used to have a bunch of bagatelles hanging up on the walls and in the bathroom. It looked so cool I contemplated collecting them myself.

And Dirtflipper who is a Gottlieb nut, I believe has a Baffle Ball home game. Because why not?

Here's a pretty nice looking 1936 Bally Bumper. Seems to be the 1930s game that comes up the most for sale but I like it.

Did I post this one before? I may have. I wondered about the cab colors but never checked IPDB to verify. Anyway in my area it seems if a 1930s game comes up for sale about 80% of the time it's a Bumper for some reason.

he is getting better on his asking price. NIce machine tho i think the colors are wrong. FIrst machine with bumpers i think,
Id wrangle a deal if i was closer
--Jeff

So many rules now. We need to ask Pin-it what's acceptable? Where is that guy anyway? He pops in every couple years it seems.

Among my favorite art packages is that of Genco Metro. Here's a Metro playfield for sale on eBay.
ebay.com link » 1934 Genco Metro Pinball Game Top
https://i.ebayimg.com/images/g/-LsAAOSwBV5adLld/s-l1600.jpg

It is pretty. I can't think of Metro without associating it with Russ Jensen.

All the images I could find of the style I'm thinking of were in Europe. I have seen something similar to this for sale locally more than once. No idea how you play? 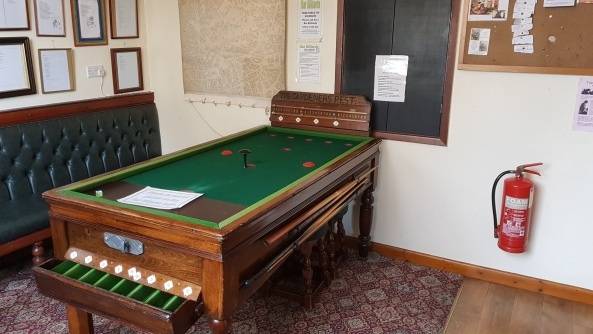 There was a 1933 Genco 42nd Street on Milwaukee Craigslist yesterday for $60. Looked nice. I was so excited but you just know a deal like that rarely works out.

Yeah, it was nicer than the one pictured. Although the cab had been repainted. Looked nicely done though. One of those that is super cheap and you discover it while your at work. You just know it's going to be gone in a short time and there isn't much you can do about it.

Has an aftermarket flipper kit installed. Seems worth it in parts to the right guy.

I hate to see a game die also. If it was just the legs cut it wouldn't be that big of a deal. It's the missing head mechanicals that make it seem like too much trouble. For me anyway.

I'm speaking from personal experience with Jack, the owner of these games.

You've gone to see them? I admit I've always been a little curios about this pile of games. I keep hearing they are a dilapidated pile of mismatched wood rails. Must be something in there worth salvaging? Maybe not at his price point?

They don't get much earlier than this one.
https://www.ebth.com/items/8581975-circa-1880-m-redgrave-s-parlor-bagatelle-table-game

I see Goofy once in awhile and this one reminds me of it both in colors and design. I like it. If it wasn't 7 hours round trip...

You bought that? Sweet. A neat piece of pinball history. Congratulations.

This looks interesting for the money. Couldn't find it in IPDB.

This Gottlieb Score Board looks pretty neat. It appears to be missing the coin door. 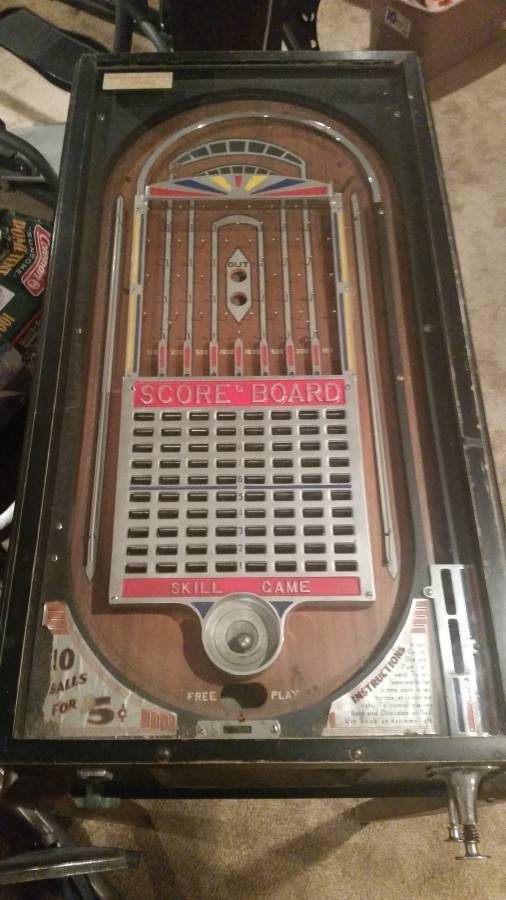 Here's another neat one with some cool castings. 1934 Cannon Fire Jr. at a fair price. This one has it's coin door. Seems uncommon on this era. 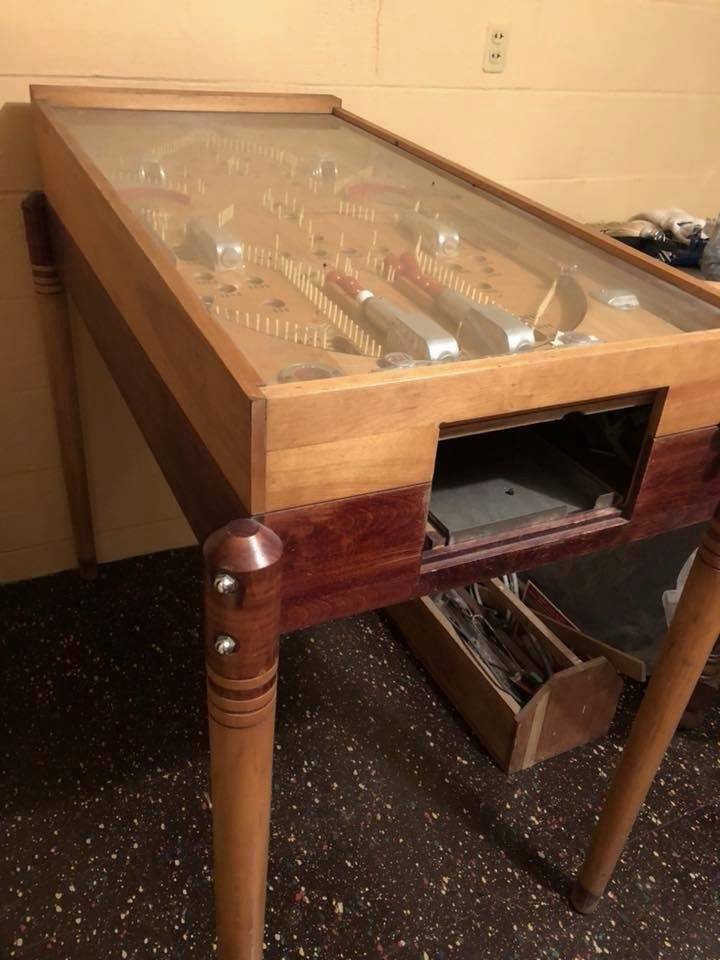 1947 P&S Tom Tom. This one has been on my short list forever but I won't be able to get up there to get it. At least for awhile. I'd like to see it get saved though as it's such a rare and cool game. More arcade than pinball but it is flipperless and has a plunger.
appleton.craigslist.org link 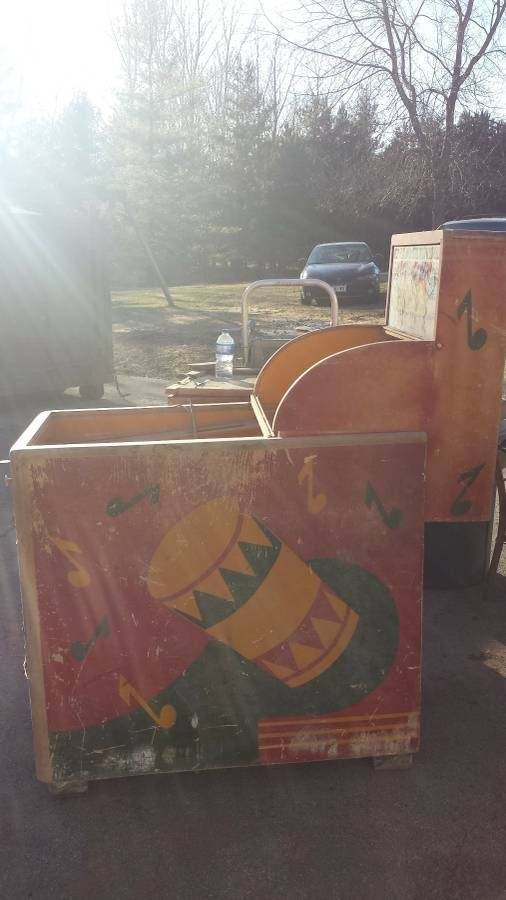 Alex!
I've never even heard of this title before. I can't even figure out what in the world it is! ...besides more of everything I want:

It's in your home state, Alex. With this being so high on your wishlist (and who knows when/if you're ever gonna see one again), I really hope you nab it. Please, at least contact the seller if you've not already. Maybe he'd be willing to hang onto it for a bit if you paypal him a deposit to let him know you're serious. It's worked for me before.
*begging*
-Ryan

Tom Taylor has one and I've played it a few times and really loved it. It's sort of like a mini-skee ball with a rotating barrel. I'm not sure how long the gameplay would hold up but it sure isn't lacking in charm.

I've been mulling it over. Half thinking I need to make a move and half hoping somebody else grabs it. I like to let destiny play a role sometimes. If it's still lingering for some crazy reason in another week it may be meant for me. It can't be a priority for me before then so that's how it's going to be anyway. If someone else gets it, it's ok. As long as they don't make furniture out of it. I've had some previous grails come and go and the world is still turning. It does need some work but looks to be mostly there and worth the trouble I think.

Hey Ryan you've never been afraid of a road trip.

$85 BIN Jiggers. Dang needs a little love but for under $100 how can you go wrong. Lists a shipping price but looks like pickup only in Alexandria, VA.

Whizz Bang for $350 in Chicago. Very dry looking. I bet it would really soak up a new coat of finish but could be a nice transformation.
chicago.craigslist.org link 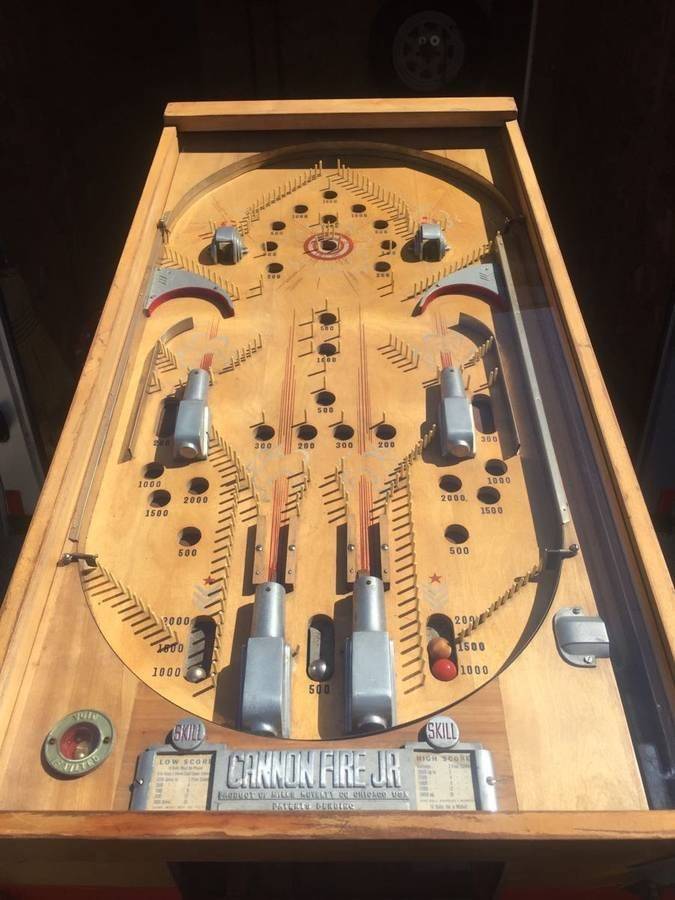 Here's an attractive game. Looks like it would be something Cait001 would have in her collection. Says it's from Cincinnati but looks English or German to me? Also l imagine this had lock instead of a latch on it originally.
https://www.ebth.com/items/12081775-coney-island-wondermatic-wooden-tabletop-penny-pinball-machine-1920s-1930s