WELCOME ONE AND ALL
THE RAD REPLAY SERIES is a fun and accessible pinball tournament series open to all levels of players. We are sanctioned by the International Flippered Pinball Association and so whether you are a beginning competitor or a seasoned veteran player, you can gain points and improve your standings among the world pinball community. Simply show up ready to play and we’ll take care of the rest.

THE BASIC RUNDOWN
It’s easy! You will play games in what is called a “Fair Strikes Knockout” format. Every round you will be assigned to a game with 2 or 3 other players. For each game you play, you are assigned strikes depending on where you place. (0/1/1/2 strikes are given to 1st/2nd/3rd/4th place finishers –Three-player groups get 0/1/2 strikes –Two-player groups get 0/2 strikes) Once you have used up all of your strikes (strikes for the tourneys will be determined based on attendance) you are knocked out of the tournament.

Each tournament is a standalone event – meaning there will be cash and prizes for winners for each tournament individually – but if you win one, or you play in at least 3 in the series, you are invited to play in the final tournament for more prizes, trophies and GLORY!

WHAT IF I MISS A TOURNEY?
It doesn’t matter! Come to as few or as many in the series as you would like. It’s like a league but without the commitment! 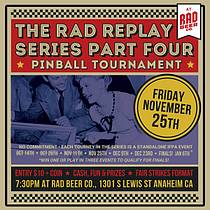