2 tournaments in one night

Stern Army Avengers Infinity Quest LE Launch Party and Extra Plunge for Points on Thursday August 5 at Cool Music Stop in Harvard, Illinois.
We will be hosting 2 tournaments.
Tournament #1- Avengers Infinity Quest Limited Edition Launch Party
Qualifying 3pm- 8pm
Each player will be able to play up to 3 free games on Avengers IQ.
The top four qualifiers will play a 3 game playoff at 830pm on Avengers IQ Limited Edition only! The winner will take home a plaque, a gift certificate from Cool Music Stop and a Stern Avengers IQ translite!
Tournament #2- Extra Plunge for Points
7 rounds of group match play followed by a 6 game multi match play finals for the top four qualifiers.
We will be covering the $1 IFPA fee for both tournaments (this night only). The only cost for the evening will be coin drop for the Extra Plunge tournament. There will be prizes and giveaways throughout the evening thanks to Stern Pinball, Cool Music Stop, Napoli Pizza Place of Woodstock, Illinois and District 82 Pinball of De Pere, Wisconsin 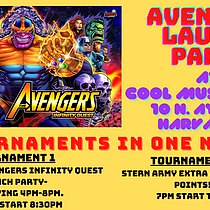