Finals: Fair Strikes - The top (?) players in standings after qualifying will advance to a finals session consisting of a Fair Strikes(0,1,1,2) format. The games used for finals will be chosen beforehand and posted before tourney start. First round pairings will be "Slaughter Pairings", second round and on will be "Swiss Pairings". Higher seeds will have choice of player order throughout. Once a player reaches 5 strikes they will be eliminated from the finals. Last player remaining will win the championship. The number of players playing in finals will be dependent on total number of entries and announced before the tournament start.

Trophies to top finishers. IFPA Sanctioned and will be played for State and World Pinball Ranking Points.

Maximum Entries Allowed will be 100 players, All Skill Levels Welcome!

Please contact Tyler Becker via email - [email protected] to reserve your spot! Please include your shirt size and IFPA #(if you have one).

Sponsorship Opportunities available. Any potential payouts to winners will be dependent on procurement of sponsor. 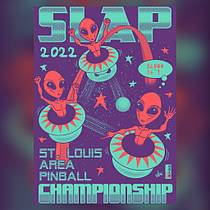