Pins & Pirates Pinball Rally is a 4 Day Pinball Tournament open to all Skill Levels of players.

The Pins & Pirates Pinball Rally (PPPR) tournaments consist of open qualifying Best Game Format and Group MatchPlay finals. During open qualifying, each player may make as many qualifying attempts as you like. A point system is used to rank each player’s score on each machine. Those who rank highest at the end of qualifying will participate in the match play final rounds. In the final rounds, qualifying players play against each other in multiplayer games. A [different] point system is used to determine who advances to the next round and who wins the division.

* We will be using the Never Drains Software to run the tournament.

~ Captain’s will be expanding the Showroom as we did in 2019. There will be a huge of FREEPLAY lineup, along with a table area for eating.


The determination of final qualifying standings will be made by tournament officials at the end of qualifying hours, and shall not be changed for any reason, including player error or tournament error. 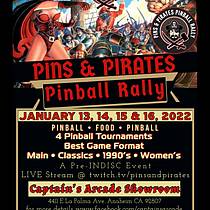