Once a year we build the biggest arcade the Northwest has ever seen!

One weekend, once a year, collectors from around the Pacific Northwest come together, bring their games and create the largest freeplay arcade the Northwest has ever seen. 400+ pinball and arcade games on freeplay the entire weekend, tournaments, speakers, tech seminars, kid's zone, homebrew games, the latest pinball debuts, vendors, raffles, merch and more.

There's a reason why people like Steve Ritchie says this is one of the best pinball shows in the world! 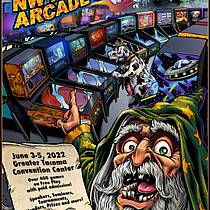 There are 11 Pinsiders known to be attending this event: