2022 IFPA Louisiana State Pinball Championship tournament to be held on Sat Jan 21, 2023 by Longville, LA.
Start time to be around 1 pm. Arrival time is from 11 am to 12:45 pm if playing in the LA State Championship. Practice time and lunch from 11:15 am to 12:45 pm. Review tournament format, rules, and player pairings from 12:45 to 1 pm.
Contact Mike VanEtten at [email protected] or 337-962-4078 for address and directions to this private residence (that is located in Beauregard Parish, LA).

The top 16 ranked players from IFPA-sanctioned events and leagues held in Louisiana throughout 2022 will compete for the chance to be crowned the 2022 IFPA LA State Pinball Champion.

The winner will get an invite from IFPA to the IFPA natl championship for yr 2022 in the 1st Qtr of 2023.
This official IFPA State Championship event will earn IFPA points for year 2023.

Tournament machines will be a mixture of classic solid state types, dmd type, and modern pinball machines, with year of manufacture being from approx. 1980's up through 2020. Eight or nine machines are planned to be used in the state championship tournament, with a 10th machine on stand-by if major issues arise and a machine can't be quickly repaired.

Head-to-Head Single Elimination Format. Each 2-player match is Best-of-7 games as players advance through the bracket, except best of 3 games for deciding 3rd/4th places in the consolation match. All other finishing positions will also be played out in best-of-three game matches to determine 5th through 16th places.
Tournament bracket will be seeded per IFPA player points earned in LA yr 2022 final standings.
#1 seed to play #16 seed, 2 -vs- 15, 3 -vs- 14, etc.
If some of the top 16 players don't commit to play in the state championship that earned IFPA points in 2022, then the remaining open positions of the field of 16 can be filled with other players present during the 12:45 to 1 pm start time, with preference given to next highest player in the IFPA LA 2022 end-of-year standings (17th place in standings, 18th, 19th, etc.).

No entry fee for main tournament, and the $1 per player IFPA endorsement fee is waived by IFPA for all state championship tournaments.
Cash payouts for this LA state championship will follow % breakdowns set by IFPA for finishing positions, and $ pool size as reported on IFPA website for LA yr 2022 standings.
An IFPA Trophy to be awarded for 1st place.

Side tournament: Louisiana Pinball Challenge Side Tournament
This side tournament is open to the public to play in (not just the top 16 players in the main tournament).
Tournament will earn IFPA points. Max field size to be 24 players.
$5 entry fee per player to help cover: cost of trophy, the $1 IFPA fee per player, hosting expenses, etc.
A trophy will be awarded to the 1st place finisher.
Format: Single elimination, head-to-head, best of 5 game matches, while advancing through the bracket.
Best of 3 game matches to determine 3rd & 4th places, and all other lower finishing places.
Random seeding by picking numbers to be used to set the initial 2-player matches.

Side tourney to start later in the day, after most of main tournament matches have been completed.

Host will provide the main dish/meal to serve to players & guests.
Players/guests can bring snacks & sides to contribute to the event, and bring their choice of beverages. 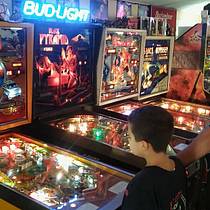