IFPA Sanctioned and for WPPR points

Includes free food and all day free play on over 75 pinball machines!! All entrants will also be eligible to win one of several attendance prizes that will be given out.

Trophies will be awarded to the Top Finishers in A Division, B Division, and Youth Division. There will be a cash payout for A Division Finishers. The exact payout and number of payouts are TBD and based on total number of entrants.

Qualifying: 5 rounds of two game banks, four player matchups using IFPA(7,5,3,1) scoring. Each round the group of four players will play the two games from the selected bank. Tiered Swiss pairings and banks will allotted at random per each group. After the 5 rounds are complete, the top 32 players in the standings will compete in the A Division Finals. An additional amount of players will compete in a separate B Division Finals, the amount of players competing in B Division Finals is TBD and based on the total number of entrants.

A Division Finals: Bracket consisting of four player matchups with the highest seed in the pairing getting to choose the game bank for the group. Each game in bank will be played, entrant with lowest score on game is eliminated. For example if bank 1 is chosen, the four players play Rush, lowest score eliminated. The remaining three players then play Meteor, lowest score eliminated. The remaining two move on to next round in the finals, with new pairings and banks once again selected by highest seed. When we get to the final four, the highest seed picks the bank, when gets down to final two the highest remaining seed(of those final two) has the choice of picking the bank or game. If they choose a bank - the other finalist chooses one of the two games from that bank. if they choose game, the other finalist will choose a bank and the higher seed getting to pick one of the two games from that bank.
Each bank will consist of one older pinball machine( likely more than 15 years old) and one newer pinball machine(likely made in the past 15 years). The banks will be announced prior to the tournament start time.


Drinks and food you are allowed to bring, candy and soda is also available to purchase on site.

-Banks- (most to be announced at later date)

*banks are subject to change* 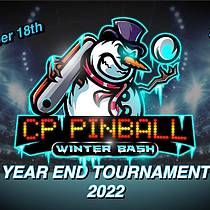