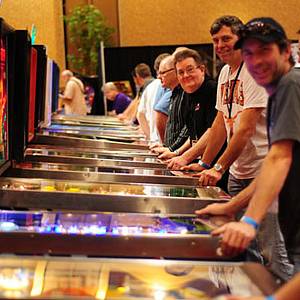 Who are “YOU” in pinball?

Who are “YOU” in pinball?

Dedicated from an article written by Chris Munson, one of the original organizers of the the EARLY days of the Texas Pinball Festival, almost lost to time.

If you are an attendee at this year’s Texas Pinball Festival (and I assume
you are, given you’re reading this), your interest level probably belongs
within at least a few “classes” of pinball interest: the “casual observer”, the
“novice”, the “collector”, or the “diehard pinball aficionado”. While none of
these categories has any “official” merit, suffice it to say for purpose of
discussion, these terms will work here. Let’s take a look at these terms, and
see where you might fit:

This is the individual who has either never seen a pinball machine, or has
rarely interacted with a machine(s). If you are one of these folks, WELCOME! We
are happy to see that you have had enough interest to "take a chance” and see
what this hobby is all about. Take the time this weekend to look at all the
machines you can; note their unique characteristics, the variety of artwork and
sounds, the unique differences in technology, and the themes.
Historically, pinball has been based on many subjects, including sports
(baseball, basketball, football, racing, soccer), comic book characters
(Spiderman, Superman), television shows (Charlie’s Angels, Hulk, Simpsons),
fantasy themes (Humpty Dumpty, Cinderella), movies (Terminator 2/3, Lethal
Weapon), music (Ted Nugent, Kiss, Rolling Stones), and recreational icons (many
bowling, pool, and card themes), to name a few!
There is simply TOO much to say here in such a short space, but if you have
an interest in pinball, especially after this weekend, you can easily get
“swept up” into the hobby. Remember to ask plenty of questions, don’t be shy,
and take in as much as you can from those individuals around you, who may know
PLENTY and would be happy to share their knowledge with you.

This is the person who usually has one of two reactions: “Wow, I remember
that”, or “hey, there is a pinball machine, think I will try it out”! Commonly,
the novice experienced pinball in his/her youth (when arcades were very
popular), and for sake of nostalgia, pursues it out of curiosity. While they
do not necessarily seek it out as a pastime, finding a pinball machine in a
public place elicits a positive response.
Unfortunately, the novice today has few venues in which to discover pinball,
since the majority of companies who thrived on it have gone the way of the
wagon wheel. Fear not, though, popularity seems to be gaining, as the only
company remaining, Stern Pinball, is currently manufacturing pinball machines,
and releasing them to rave review. Some recent titles have included Austin
Powers, and Terminator three – both “movie tie-in” themes which are instantly
recognized by the public and designed to attract the younger player to pinball.

In many cases, going from the “novice” to “collector” level is a short,
quick jump – especially when one finds out that they, too, with a little
effort/time/money/space can own THEIR OWN pinball machine. Don’t let this scare
you – if you are a “novice” and want to remain so, enjoy yourself! Just don’t
say I didn’t warn you about the addiction….

A collector is an individual who owns one or MORE pinball machines, and
deems it a “collection”. While some die-hard pinball fans may refuse to believe
that having only one is a collection, it is!
Your typical collector is the person who “woke up” one day from the slumber
of reality and realized, in our complex world of information exchange (i.e.,
internet), that actually locating a pinball machine that was FOR SALE was not
such a tough thing to do. Certainly not for the faint hearted, though, the
collector is much like the African bush hunter who must overcome the
environment while stalking his prey. The collector must learn to be “patient”
(waiting for the title he wants to appear on the “scope”); must be
“particular” (once the title shows up, is the QUALITY of the title adequate?);
must be “persistent” (if you are going to fight for it, be prepared…whether by
hitting the “bid” button on the auction, or bugging the seller to death); and
must be “prudent” (how much time/effort/money am I going to spend to “bag” the
machine”?
Collectors are often known to possess unique collections, because the
“theme” either fits their nostalgic whims, or a particular side interest. Some
examples would be the forty-ish collector who owns lots of 80’s games (from his
youth); the hockey fan who owns only hockey themed pins, or the movie buff who
only has cinematic titles. In any case, these are not necessarily hard-and-fast
rules, and some people will “cross over” into other types of pins, simply
because they are enjoyable.
Finally, collectors are a very good resource, because they often are
reasonably well connected to local/regional/other sources of pinball
“peddlers”. If you have any interest whatsoever in collecting a pinball machine
(or several), make friends with a collector. You won’t be sorry!

Look out, folks. You will run into many of these people, especially at a
pinball function. These are the bleary-eyed folks who stay up late at night
working on their machines. They peruse the classified ads, internet, and ask
everyone they know for leads on machines for sale. Their kids are being brought
up “under the influence”. They own all the pinball books ever published. On the
internet, they have unique screen names, like “popbumper”. They have web sites
full of information and links to other web sites full of information with links
to – I think you get it. They hold pinball shows, give pinball seminars, and
freely give advice. They painstakingly repaint cabinets, repaint playfields by
hand, de-rust their chrome pieces, etc. Their homes are full of pinballs,
working or not; they buy containers of used pinballs from Europe and
restore/resell them. They have stacks of circuit boards; they do repairs; they
do house calls; they write articles for magazines and brochures and…..whew!
Be consoled, this is not a bad thing. The diehard aficionados ARE the
people that have brought you this show. By day, they have regular jobs, though
most of them would probably make a living at the hobby, if they could make
enough money! These folks have a love for this hobby like no other, and are
compelled to learn just about anything they can to promote, uphold, and restore
interest in pinball as a whole. It is no secret that these people are
collectors of the highest caliber; knowing these people will probably get you
MORE INFORMATION than you could possibly want. Ask around; it won’t take long
to find them. Just be prepared to sit and listen for a long time, and politely
excuse yourself it it gets to be too much.

Regardless of who you are or who you want to be in this hobby, you have chosen
to take interest in a unique game which is rivaled by none other. We hope that
your weekend is one filled with education and entertainment, and that you will
be rewarded by the experience.

FINAL NOTE: Recognize some of the people in the photo? Collectors should...

xTheBlackKnightx edited this story on June 10, 2016. 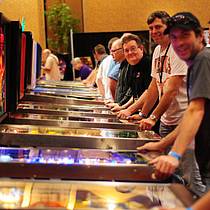 Awesome. I am a "collector" as almost every single word defining a collector fits me like a glove. But I am also well on my way moving into the "diehard" catagory as my average bedtime for the last 10 days has been 2:00 am (Rollergames restoration).

I have had a Gottlieb Abra-Ca-Dabra Machine for 25+ years. It is in good shape and plays well The art work is . Has some rust on legs and coin box. I have the key. I know nothing about the pinball machine world but want to sell the machine and do not know the first thing about doing it. Nothing is wrong with it from a non-collector side, we just are downsizing to a smaller home I live outside Austin Texas.

Any advice anyone can give...thanks in advance.

I have had a Gottlieb Abra-Ca-Dabra Machine for 25+ years. It is in good shape and plays well The art work is . Has some rust on legs and coin box. I have the key. I know nothing about the pinball machine world but want to sell the machine and do not know the first thing about doing it. Nothing is wrong with it from a non-collector side, we just are downsizing to a smaller home I live outside Austin Texas.

Any advice anyone can give...thanks in advance.

"Who are YOU in pinball?"