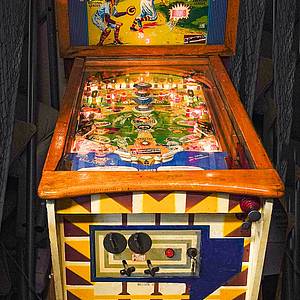 I grew up in Johannesburg South Africa and we were blessed with the best of the Gottlieb woodrails. What we didn't know in the late 60s / early 70s was that these were 15+ year old "obsolete" machines shipped from the US when the steel railed modern machines came into fashion in the 60s (my theory anyway).  Queen of Hearts (that I remembered as Ace of Spades) and Sluggin Champ were the 2 that stood out for me. I tried to build my own version of Sluggin Champ using my Mother's sewing machine engine to power a rotating flipper. What made this era of machines so interesting was the multiple ways to win (Sluggin Champ 5 free games for all the yellow National League cities or red American League cities or ultimate objective both for 10 free games if you were able to lose the ball in either lit gobble hole. Then you could also win based on RBIs (whose value increased with each successive ball - in South Africa we didn't play baseball so we had no clue what an RBI was), high score levels and specials when lit). Queen of Hearts had a similar set of possibilities (poker hands, suits, score).

After moving to LA I found a Sluggin Champ deluxe after many years of searching and now have a varied collection of 25 machines including a bagatelle (with those nails (pins) around the holes), the early 30s, first flipper (Humpty Dumpty), 50s, 60s and 70s ( with a refurbished KISS being my token solid state)....to be followed by one of the new Led Zeppelin's soon (LE if funds allow).. 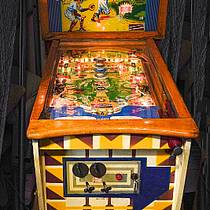