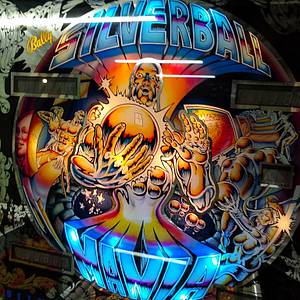 This is a story of a birth of a hobby and a family heirloom.

Back in the day, there was a classic staple of New England right by Lake Whalom in Lunenburg Massachusetts, Whalom Park. Inside the park there were many fun rides, marionette puppet shows, a train and even a fun house! (ahHAHAHAHA)

BUT most importantly, an arcade was there, and it help set the wheels turning for the hobby between My father and then myself.

My father worked in the arcade in the park as a teen, and would grow up loving pinball, gun games, and arcade games in general, but if you couldn't get in Whalom, luckily you could get your fix at the Whalom Arcade conviently located next to the park, and is where the tale begins.

The year was 1983, and my father was in his early 20s, in college and loved pinball, his favorite being Paragon at the arcade he worked in. The arcade industry was BOOMING and it was THE place to hang out at! But at the arcade next to the park, one game had it's run and was ready to be taken out.

In the back of the arcade, a lone pinball machine stood and after only three years of play, it's runtime was just about up. The quarters were not dropping like they used to, and the arcade owner had to think of something, and quickly came up with an idea.

My father was in college with morning and evening classes, and to kill time, he would enjoy himself at the arcade, frequently. One day he entered the arcade and walked to the lone game in the back and saw the fabled sign on the machine.

"Make the highest score and win this machine!"

There was not any real explanation why there was a contest,  it was the only pinball game in the arcade, and the contest was on. My father, keen on a deal and a halfway decent player decided to take up the challenge.

Oddly enough, the contest ran for three months,  and in-between classes, my dad would spend an hour and play pinball, trying to rack up the high score, and do the same the next day, until finally after three months, he had done it.

The grand prize was his, his very own pinball machine, for free. The game in Question?

It was cosmetically worn, teltalle signs of little to no matienence, heavy wear on the center where silverball mania is spelt as is typical of that game, while the rest was only slightly dirty. It was interred in the basement of my grandmother's house, family and friends would come and play "pete's game", and everyone was excited.

Then, one day after a few months of playing his prize, it did not work, it simply did not turn on, after years of neglect, and a lack of knowlege on how to upkeep the freebie, it did not power on, it sat unused in my grandmothers basement for years, and years until......... I was born.

As a child of the early 90's, I was spoiled in the fact there were many great games around me, whether it be the theater, drive Ins, pizza places or alleys, there were many good games around, some highlights being The Addams family and creature from the black lagoon, dirty harry, fun house, and even at that same arcade, they had three games that really made the hobby stick, Tee'd Off, Indiana Jones, and STar Trek TNG.

But, there was a special game, commonly referred to as "The game in nonna's basement". My earliest memories were at 4 years old, and I can remember every time I went to my grandmothers house from child to young adult, going down and staring at silverball mania, admiring it.

The allure was there, my dad had a ACTUAL MACHINE, it didn't matter if it was working or not, it piqued my interest. As a child i'd comb over every detail of the game, the lockdown bar had been misplaced as well as the key for the coin door, so I'd cautiously remove the glass and study the machine, pouring over the amazing artwork, reading the rules, finding the letters, the horse-shoe shot, and "kicking" the rusty ball out into the lane and plunging it, while pushing the flippers with my hands to simulate play, I was enthralled. Ironically, as a child, i noticed the "Strange" depiction on the backglass of a man "grunting" into a pinball machine with a face, and my father, the red blooded man in his 20's DID NOT REALIZE THAT WAS THERE until being pointed out by a passerby at the 2019 pinstastic game room show! An innocent and naive man, but I digress.

For years I had wished that machine was mine, i'd lifted up the playfield, studying the machinery and parts, amusing myself every time, i'd even go into the basement just to look at it for what seemed to be hours, as if it was a museum piece, a family collection. Then one day my dad made me a promise. My academics were average and not amazing, I got by and eventually struggled, unlike my brother who had known nothing but "special honors" with every report card he had ever gotten, so the deal was this such; "If you can get on the honor roll, I will call (the repair shop) and get it fixed". I couldn't believe my ears, the challenge was issued, if I could push myself I could have it, he said it would be fixed! I'd finally be able to play the game that had been in my eyes gaze for my entire life! You would think I'd work tirelessly to earn that coveted prize, but unfortunately, it was difficult to apply myself. I had done better in my schooling, but i'd never make it to the honor roll, Silverball Mania, in my grandmother's basement, would forever sit.......................however.

Years later, I can remember the school day clearly, it was 7th grade, report cards came in, I was walking around the class room in it's free moments, the teacher was calling out names for report cards, and first started off with the honor roll, I paid little mind, my focus at that point was getting home and playing wii or some nintendo games, the teacher was rattling off special honors, high honors, and my mind was a thousand miles away, then as I was turning, heading for the lockers in room, I heard it. "Honors.............Daniel."

I froze in place, and my mind was shocked upon hearing my name, and I went wide eyed, "That's my name. I made honors........OH MY GOD, I'M ON THE HONOR ROLL!!!" and my face had transformed into a grin. The machine i've waited for my entire life was going to be fixed. The realization and thought happened in a split second, and still wide eyed, I started towards the teacher's desk and graciously accepted the report card from her. My thought's had not ceased upon the realization, and I kept it to myself until I got home. My parents asked me how the day of school was, and I smugly said, oh it was alright - but I did get this, and I slapped the report card I had received and my finger shot at the keyword on the report card "Honors", years later, it had finally come, it was time to pay the piper his due.

My father was proud, and within a few weeks, I went inside my house, and there it sat on my porch, fully working, it was finally time to play it, and for hours I did, with my father.

Since then, I've moved out, and in a bit of fate & irony, it sits in my basement, unworking, but I'm getting around to replacing a board.

For years I've been thinking about replacing the playfield, or installing a hardtop, but in my mind, doing so, would take away the allure, the memories of staring at the center, imagining the slightly missing piece, and getting creative in my mind

But one thing is for certain, one day it'll leave my basement, and be passed down again, from father to child. 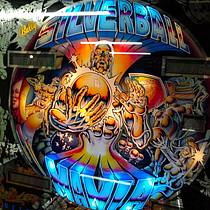