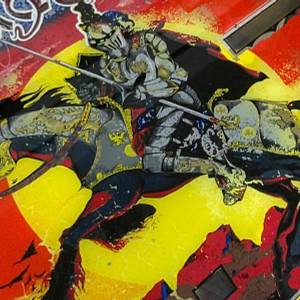 Will you challenge the Black Knight again?

One Christmas my parents and grandparents both put in some money to get my brothers and I a large Christmas gift. The gift they decided on was a pinball machine. The machine they ended up getting was almost certainly the cheapest one around. An old Black Knight that was beaten to hell and back. But it played, however, and to us kids that was all that mattered. At the time I was six or so years old, so I didn't really know flipper skills nor did I know any playing strategies. All I did was just hit the ball around and watch things happen, but the things that did happen were beyond cool to me. The drop targets dropping, the spinner spinning, the magna-save catching the ball, and the Black Knight's speaking. He continuously gave taunts like "I will slay you, my enemy" and "Will you challenge the Black Knight again?". These taunts drove me to hitting that start button time and time again. I grew up past the prime of arcades, so I never really saw the newer games with all the advanced lights, sounds, and displays, so as far as I knew, the Black Knight was the peak of pinball technology, and I loved it.

The Black Knight was not without its issues, however. It would break every so often and my dad would fix it, however eventually there was an issue that was very difficult to repair, and due to a combination of my dad being busy with is job and that my brothers and I didn't really play it that much anymore (my interests had transitioned more to video games), my dad didn't bother to fix it.

That seemed like the end for the Black Knight, but fast forward 10 years and the Black Knight's future would brighten. At this point I was a major retro gamer. My collection included about 30 or so systems and more than 300 games. This interest in retro video games had me subscribed to many Youtube channels about retro video games. One of these Youtube channels was Classic Game Room, and one day a video review of Stern's Star Trek popped into my subscription box. I had remembered watching Mark's review of Tron in the past, and I thought it was wicked cool, but upon going to Stern's website and seeing the price I lost interest immediately. However after watching the Star Trek review and once again being greatly impressed by pinball, I decided to look more into things. I remembered that another Youtuber I had subscribed to for his retro gaming videos (Chris Bucci) had a whole series of pinball videos as well, so I figured I'd watch those. So I took myself over to Chris's channel and watched a few videos and I was hooked. Over the next few days I watched the whole series but still wanted more. I then began watching more of Mark's pinball videos, and also started watching PAPA videos. At this point I was more than excited to play some pinball myself, so I approached my dad and asked him if he could help me fix the Black Knight. Eventually we were able to get the game back up and running. It was time to challenge the Black Knight again. 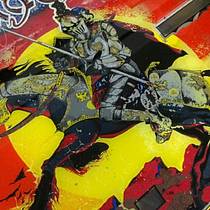 I love stories like that. My Xenon story is very nostalgic as well, I put hundreds of dollars into that machine. Good luck with your Black Knight. I did in fact buy a Xenon, and am having ALL sorts of fun getting it running right.....

I love stories like that. My Xenon story is very nostalgic as well, I put hundreds of dollars into that machine. Good luck with your Black Knight. I did in fact buy a Xenon, and am having ALL sorts of fun getting it running right.....

BK is the only machine I have. I bought it a few months ago with a good playfield. Not knowing how to fix it, a $20 part got me to sink in around $800 after everything is said and done. But I've pimped it out with LEDs and new WPC flippers. The action is fast and I LOVE my BK. I play it every day.