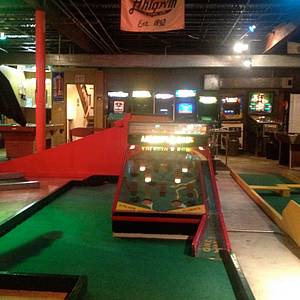 Long ago, in a funeral home not far away...

It was the late '80's, and I was at a wake for a friend of my parents at Ahlgrim's Funeral Home in Palatine, IL. As was often the case in these situations, I was bored out of my mind, and decided to take a walk.

So it was that I found a door labeled Community Room. "Well, that sounds intriguing", I thought. I opened it to find a dark stairway leading downward. Adventure! With a grin, I headed downward.

When my eyes adjusted, I realized that I had stumbled upon Ahlgrim Acres, a 9 hole mini golf course and arcade, in the basement of a funeral home. My mind was blown! Space Invaders, Galaga, Lunar Lander, Donkey Kong...it was a bunch of the classic games that I loved from my favorite local arcades! And there, at the end of the line, was a pinball game I had never seen before. A creepy mansion exploded from the backglass, against a night sky filled with lightning. Every once in a while, the game would erupt in a creepy sound. I walked up to it and stood transfixed, mesmerized by its attract mode. It was SO COOL! Needless to say, I dropped more than a few quarters into it, even if the multiple flipper layout and lower playfield were a bit beyond my reach at that point.

A couple of decades later, after I had gotten into the hobby of video arcade game restoration, I started to consider the notion of maybe getting a pinball game at some point. I recalled fondly my experience at Ahlgrim Acres, and started to learn more about Gottlieb's Haunted House. When the opportunity came up to get my hands on the game, I jumped at the chance.

Working on this game over the past couple of months has been a thrill. And playing the game has been every bit as fun as I remember - perhaps more so, now that I have a better understanding of the ruleset and goals.

Clearly, I have been bitten by the pinball bug. And I couldn't be any happier. 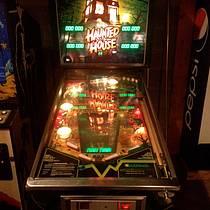 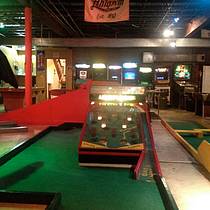