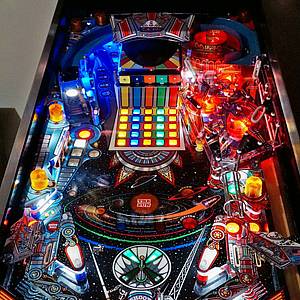 Searching for the unknown machine

I remember the caravan park my parents took us every summer having a small arcade with 4 machines and a bunch of other arcade machines that would regularly be replaced by new ones.

I was always interested in the pinball machines and the other arcade machines would not interest me at all. I would ride my bike to the arcade and always carefully select the machine that I would play on as I had limited pocket money and really wasn’t able to play more than 3-5 games.

I was most attracted by the games that had a lot of ramps, but I remember somehow being very interested in playing this one particular game that funny enough had practically almost no ramps, but the space theme and the simple goal of trying to score planets was just super attractive to me. Unfortunately, the machine got replaced not long after I discovered it. I played only once or twice and I never knew the name of the game, but from that point onward I knew I wanted to have my own pinball machine and it had to be this one.

Years gone by and as I became an adult, this idea of owning a pinball machine always remained in the back of my mind. I never really searched for one since I knew didn’t have the space for it anyway.

5 years ago, I decided I waited long enough and some 30ish years after playing this space themed machine, I began searching for this nameless game. It took a long time before I even discovered the name of the machine I was looking for. It was PINBOT. Now that I finally knew what machine I was after. It was actually surprisingly hard finding one and when I did, sellers would often ask a ridiculous price for it.

At one point I thought I bought one at a local pinball reseller. I was in contact with them, arranging a pick-up time and location, when they suddenly went silent. Turned out they sold the machine to someone else even after already agreeing on a price with me.

After a long search, I finally found one that was not in great shape, but it was very reasonably priced. I bought it and I now finally owned my own PINBOT.

First time playing on it brought back memories. For a moment I was that 8-year-old kid in the arcade again. Particular the sounds and music this machine produces, really give me those childhood 80’s electronic music vibes.

After only playing it for a few weeks, the machine unfortunately broke down. I was just too busy with work and family life to find time to fix it. I had no budget to get it fixed either. So, the machine ended up sitting in the corner of the rumpus room for 2,5 years until COVID lockdown hit us. Being at home I now had the time (in between taking care of a newborn) to bring my machine back to life.

I gathered enough courage to start taking it apart for a full restoration. I build myself a tumbler from parts of our old washing machine and I also stripped our table of its legs to use on a self-made rotisserie. I did a deep clean, playfield swap, replaced broken and dodgy parts, replaced circuit boards, repainted the cabinet, legs and apron.

I could not have done this without the support of various people here on pinside. Thanks everyone !!
It took me 8 months and a lot of patience from my wife but now she is finished (the pinball, not the wife) and I am really enjoying playing on it almost every night.

This machine will hopefully never leave. She is a keeper (and so is my wife) ! 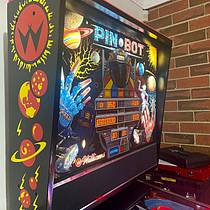 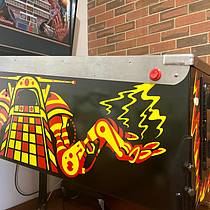 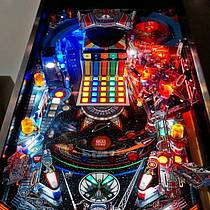 Looks beautiful, judging by the pic! Thanks for sharing.

I ran into a similar situation, where I couldn't remember the first pinball machine that I've ever played. It was my 8th birthday and there was a pinball machine at the skating rank where my birthday party was being held. Now this wasn't the machine that got me into pinball (that was Rollergames), but I was taught how to play pinball on it. I had very little to go by, since all I can remember was it's alphanumeric and it was a war theme. It took over 25 years later, but I found the name of it and it was only because I decided to buy my first pinball machine (Rollergames). The dealer that I bought my machine from had a Raven listed on their website. It looked familiar and after watching a youtube video, there was no doubt. That was the first pinball machine that I've ever played. Now, I had no interest in buying it, but it was nice to get that nagging feeling out of my mind.