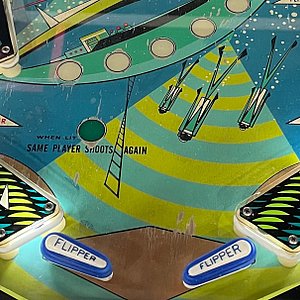 Today, I was at an modest-sized arcade in my hometown. They have some pinball machines along with classic arcade games. One of the machines they have is Bally's Eight Ball. I'm not the best at pinball since I only got into it last October, but I'm eager to learn and am getting better every time I play. I had just finished playing some games on Gottlieb's The Amazing Spider-Man and decided to go back over to Eight Ball. When I got to the room with Eight Ball, I saw this guy playing it who was racking up an absolutely incredible amount of points. He was in the 900 thousands and was about to roll the score over. Keep in mind, my high score on Eight Ball is 350,810, so seeing someone play at this level right in front of me blew my mind. Watching him slap the machine in the perfect ways and perform all of these complex manipulations of the flippers was something I can only dream of doing right now. When the score rolled over, I let out a small cheer, and the guy's friend looked over at me and smiled. Soon, the ball drained, and it was his friend's turn. Apparently it was a two-player game. I didn't want to interact with them further as I am quite an introverted person, so I decided to go back over to Spider-Man and play a few quick games on there.

Hoping that the two guys had finished their game on Eight Ball so I could play the machine, I went back over to it, and they were still there. Not only were they still there, but the one guy who rolled his score over? When I came back, I got to see his score finally add up at the end, and it was around 1,900,000. I can't remember the exact digits, but I saw it just cross the 1,900,000 barrier. It was truly incredible seeing a score like that on Eight Ball in real life. It was over 500,000 more than the highest score on Pinside. Seeing an accomplishment like that casually in my small hometown arcade has given me so much motivation to improve my skills. Right now when I play Eight Ball I'm simply excited to collect all the pool balls, but I know that if I keep learning as much as I can about playing techniques, perhaps someday, I'll achieve a score like that.