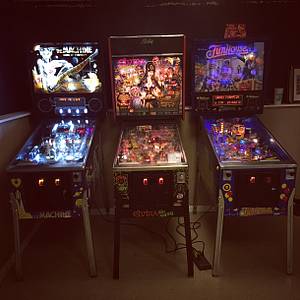 During the summer before high school started way back in the early 1990s I fell in love with Pinball. The group of guys I hung out were a bunch computer nerds and metal heads. We loved driving around St. Louis in my 1973 VW Super Beatle visiting arcades. During that summer of 1990 Elvira and the Party Monsters was put in our local 7-11. We skipped our first day of High School and spent most of the day trying to get a high score. We played that game nearly everyday in until one day she was gone.

The guys I hung out with were naturally devastated when Elvira skipped town. For some of the group was the closest thing we'd had to a girlfriend. Eventually we found out through the grapevine the company had moved her clear across town to a smokey divebar / pool hall. At first we were elated and visited her here often. Eventually she skipped town and we never saw here again. Fortunately Machine:Bride of Pinbot, Whirlwind and Funhouse showed up in our town and eventually consumed our paychecks. Atlas our true love had gone away never to be seen again.

Fast forward to 1996.. I was back home visiting friends from college at a local pizza/pub. When I heard a familiar voice come from the back room. It sounded a bit different but it was Elvira. My buddy gave me grin and we turned around to see her in the nook arcade in the back of the pub. We walked back there and my buddy said Wow.40 dollars in quarters later we left the pub. I believe I told my buddy "One Day I'm going to have my very own Pinball arcade". He laughed and said fat chance at that. I left a bit discouraged in pursuing my dream. I thought these machines were unobtainable.

Sheesh time flies. Spent a couple years playing Funhouse at a local dive bar and learning the ins and out of pinball. 40,000,000 no problem. Couple years just fly by without much exposure to pinball. A few months ago a coworker suggested I check out CP Pinball, in Roxana, IL. Couple visits later and I realized I could afford to own my own Pinball Machines. Chuck, at CP Pinball is very knowledable and schooled me on the basics of owning and taking care of the Funhouse he sold me.

I realized in my heart I had to have Elvira and The Party Monsters. I knew the playfield had to be in good condition and I could live with a couple imperfections. I wasn't going to pay buy a game totally shopped out and at a premium. After many months I realized I should of bought Elvira back in the late 90s. The few games I found were pretty beaten up. Couple weeks ago I got a phone call from an add I had placed. He sent me some photos of a machine with limited wear and some imperfections. Nothing I couldn't deal with after reading may threads on Pinside.

16 Hour roadtrip later and I have a Elvira and the Party Monsters machine centered between my Funhouse and Bride of Pinbot. My beautiful wife actually helped me clean and shop the playfield. Elvira still needs a bit of work but Pinside folks have a wealth of knowledge about this game. Now I have a serious love of the game and am trying to save some of these games.

Now I'm restoring a Williams Time Fantasy that I bought for 100 bucks. Hence my avatar. I hope to use my graphics production and woodworking skills to start rescuing more games from becoming parts machines.

TechnicalSteam edited this story on March 07, 2016. 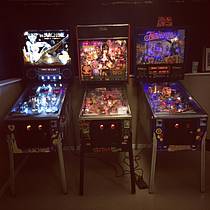