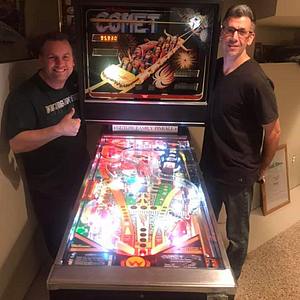 Last year a very good friend of mine and fellow pinsider, JimmyHonda, gave me one of the best birthday gifts I've ever received a Cleopatra pinball machine. (https://pinside.com/pinball/community/pinsiders/jimmyhonda/stories) Although I knew Cleo needed some work I was stoked about my new machine.

Later that summer another close friend of mine and I were talking about me refurbishing his Williams Comet machine that he received from his dad whom passed away 7 years ago. My friend and I played that very Comet all the time in his parents basement when we were kids some 30 years ago. I was very close with his family and I knew how much that machine meant to all of them, especially my friend who now has two kids of his own.

My friend agreed to give me the machine so that I could refurbish it. Although The comet machine needed A LOT of work  I knew it was a great opportunity for me to learn and grow as a pinball enthusiast and pay it forward for what Jimmyhonda had done for me just a few months earlier.So I rolled up my sleeves and got to work on the Comet machine.

After months and months of long nights and plenty of frustrating moments and with guidance from Jimmy and the pinsider community I was able to deliver an absolutely beautiful, fully restored Comet Machine.

My friend Mike and his family were completely floored when they first saw the machine and over the last several months they have been playing Comet non-stop!

When I received the Cleopatra machine from Jimmyhonda i was overwhelmed with emotions, however, the feelings and emotions I got when I delivered that comet machine to my friend and his family were tens more overwhelming. I was excited and proud of my growth as a pinballer but I was even more excited for my friend and the legacy of pinball that will be passed along in his family for generations.

A BIG THANKS TO JIMMYHONDA! 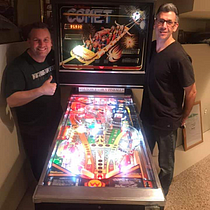 That's awesome sir. ^_^ Thanks for sharing.

That's what its all about! Very cool great job.

You sir, are a true gentleman with the right stuff inside him!