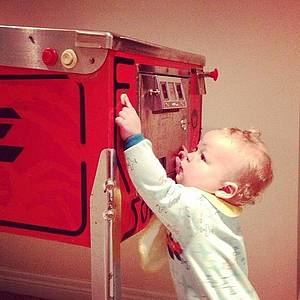 (Reader note: A version of this story originally appeared in an essay contest for the Pinball Podcast about a year-and-a-half ago. I'm proud to say it won, via reader voting, by quite a large margin. I've added a bit more content for its addition to the Pinside Stories. Thanks for reading.)

My first machine was a Williams Solar Fire, purchased out of an operator’s basement in the mid-1990s. I started saving for a pinball machine after securing my first job slinging pizzas at the local Pizza Hut. After a few months, I had a decent amount saved, and my father "knew a guy who knew a guy" who had a pin for sale. My old man was no stranger to arcades and neither was I--he made sure I had an "arcade education", taking me a few times a month to the local arcade. He tore me away from quarter eaters like WWF Superstars and Turtles in Time long enough to hook me on the pinball machines (of which, Funhouse became my absolute favorite). Pinball machines were in and out of our garage growing up, and I think my old man was pretty proud when I wanted to start a collection of my own.

Anyhow, back to the Solar Fire. Thinking back, I'm not even sure I knew the title of the game before going to look at it. My old man, being blunt as always, said: "Its got aliens and spaceships on it, what more do you want? Get in the car." Thus, away we went to visit the operator...and his workshop looked like an arcade factory threw up in it. If arcade machines went somewhere to die, this was the place–parts all over the floor, decapitated pinball cabinets, and arcade uprights with guts hanging out of them are naming just a few of the sites I saw. As a fifteen year old, though, this was the COOLEST PLACE ON EARTH. If I visited a place that looked like this for a pinball purchase now, I would probably be a little (a lot) more cautious than I was back then. $500 later, I owned a Solar Fire, pending pickup later in the week.

The machine was error free and has that space theme reminiscent of a Star Wars/Heavy Metal mash-up. It had three-ball multiball and a bright orange cabinet to boot...I was in love.The following Friday, my father was nice enough to bring the machine home and set it up in our basement while I was at work. I rushed home that evening and pulled into the driveway hardly able to contain my excitement. I leaned over to the passenger seat of the van to collect my school bag, but in my haste, I forgot to put the van into park. Still running, the van slowly careened towards the house, and I looked up just in time to see three sheets of glass in our front bay window spider web and then shatter, busting under the weight of the great white panel van. My excitement quickly melted away into fear of the fury my father would unleash upon me. Excitement to play pinball would be no excuse for my stupidity. Needless to say, my old man wasn’t happy, suggesting I immediately sell my new prized pinball machine to pay for the damage. In the end, we worked out a re-payment plan--my $500 Solar Fire ended up costing me a bit more in the long run, factoring in the added cost of replacing those windows. But it was worth it though...it got me started down the wormhole of pinball appreciation, a journey that continues to this day.

(Epilogue: It was only one year ago, after eighteen years in my possession, that I traded away the Solar Fire for a Pin*Bot. It hurt to see that machine go as it was my first, but it wasn’t getting a lot of play and it didn’t really fit in my collection. My own son took a bit of pleasure of pushing some of its buttons before it left. I'm happy to report we got the ol’ Solar Fire OUT of the house and off to its new home without breaking any windows...) 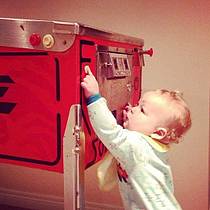 Great story. Thank you for sharing.

Love it. Your father sounds like a hardass, but a good guy to model oneself after.

Great story that put a smile on my old fart face. Thanks.
I still have my Fair Lady my dad bought back in the 1960s. It will likely be the last to go. I still have my high score from June of 1969 engraved w a bic pen into the woodrail. Life is so short. Feels like its SDTM sometimes....

Thanks for the kind words. BebetBoy78, you are so right about life being short: seems like just yesterday that I was playing Solar Fire in the basement of my childhood home.

Very cool and moving story about your love of pinball! Thanks for sharing....