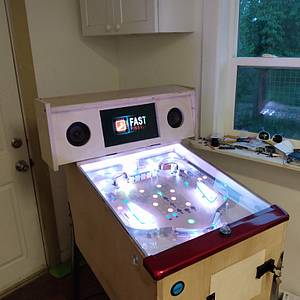 This story got featured & frontpaged on September 16, 2022

My first encounter with pinball was a complete accident. None of my family members had ever even played pinball, with the exception of my Mom, who used to play as a kid at her local skating rink. This was back around 2016, and I was eight or nine years old. I had never seen pinball machine in my life, and my parents didn't allow me to play video games, so I had zero experience with any sort of arcade game.

I had told my Dad that I wanted to go to a performance of "Wind in the Willows" at a local children's theater. The truth was I didn't really want to see the play, but everyone else in my class had said they were going to see it and for fear of being left out, I opted to go with my Dad. Inside the theater there was a side room where tickets were sold, along with the concession stand. In the corner of the room was a 1968 Ding Dong EM. The machine intrigued me. I always liked mechanical things. Light switches to water urns to marble tracks. My dad must have noticed me looking at it, because he asked if I wanted to play a game. I absolutely did. One thing led to another, and I was hooked. I didn't want to see the play at all. I wanted to play more pinball.

It can't have been more than a few weeks afterward that when a retro arcade opened in my town, known as The Machine Shop, which has become a well established arcade since then. With a place nearby to play, I urged my Dad (who typically picked me up from school) to take me there as often, and for as long, as possible. I slowly became better and learned the nuances of the game, and did my own research on youtube for how to play better. I remember the first time I got to enter my initials for a high score was on a Rescue 911 and I was thrilled about it.

Life continued. After a few years we moved across the water of Puget Sound, leaving me in a town with no pinball. I was pretty upset. To take my mind off my struggles to fit in to my new school and make friends, I would draw pinball designs for various themes I thought were cool and imagine that they were real. I still have many of my math books with old pinball designs in them. I decided when I grew up I wanted to be a pinball designer.

Once I reached 8th grade, everyone had to prepare a final project before they graduated, presenting it at the end of the year. Despite knowing nothing of the inner workings of a pinball machine, I wanted to make my own pinball machine for my project. I had no idea what I was taking on, but I was passionate about it so I didn't care. I ended up being graciously donated an old Baby Pacman playfield from a friend who knew all about fixing pinball machines. He agreed to mentor me for the project.

By the end of the year I had sanded off the old artwork, added any mechs missing from the original playfield, and built a custom cabinet thanks to my classmates dad, who is a boat builder and wood worker. I gave it a space theme, giving me lots of creative freedom. It still didn't work when the project was due, but people still seemed to like it.

I continued working on the project into my freshman year (2021), working at a hardware store to fund the parts. The game is now to the point where I consider it finished, excluding some tweaks and additions to the code. I'm fifteen now, and am hoping to build a full size game as soon as possible. My dream is still to work as a pinball designer professionally. I have been told I can't build another game unless I build my own workshop first (ha ha), and I'm working on the plans for that currently. I'll get there :) 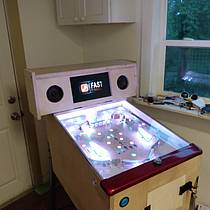 Top work @snowy_owl! You obviously have great skills and passion. I'm looking forward to the day I see one of your games rolling off the line.

You, are the future of pinball. Don't stop!

This is really awesome, @snowy_owl ! I hope you keep enjoying the hobby. @DickHamill has a really cool project for classic Bally's and Sterns which you may enjoy. Look for any threads on the BSOS (Bally/Stern Operating System.)

way to go, kiddo! Don't ever let people or situations stop the burning passion of something like this..keep on 'rollin'' and it's really cool to see this passion of pinball at the age of 8 or 9...Makes me wish I could have 'known' about this, when I was young, and follow a similar path! (no joke, I'd love to still design and do music for pins-at age 48 lol). And living way out on the sound can be more challenging, so use that challenge to overcome what most take for granted! BTW, I'm only 4 years into pinball..had I given pinball a chance, back in the 80ie/90ies, It would be a different timeline for me, for sure! Never give up, Never surrender'-Galaxy Quest

Keep it up, this looks great!

Fun stuff. You may consider looking into Visual Pinball, which allows you to build and design digital games. VPUniverse.com and VPForums.org are good places to start. And you can download and play (practically any) recreation of a game on your computer. Takes some learning/set up. But it's fun to design the game layout and test shots, etc. Good way to learn what goes into them...

@Onevox I have built several designs in vpx already, it's a super helpful tool to get a feel for shots without building the entire game.

Would love to see a video "tour" of your creation, with close-up of playfield (front and back) and gameplay.

For this industry to survive, it needs creative, driven, intelligent and highly motivated folks like you to keep it going and moving it forward. We really enjoyed reading your write-up and hope that you never lose sights of your dreams.

Thank you for sharing your story! It's young dreamers like you who help keep this awesome hobby alive! :)

Thank you for sharing your creation, and your passion. I look forward to seeing what's next for you!