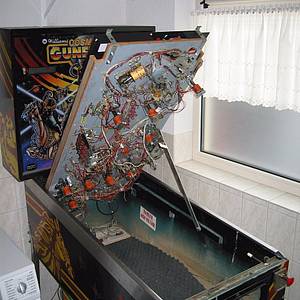 How it all started...

Welcome to my page! My name is Rob and as you can see in my name: I’m from the Netherlands. Born in 1995 so I’m a pretty young collector/pinhead. In this story I’ll tell you about how the ball got rolling, and the collections of my parents and my own.

My dad studied electronics when he was younger, and often repairs pc’s, radio’s and a lot more next to his work as system administrator. In his youth he repaired a pinball machine once (EM) which he liked a lot, but he never did anything with his skills.

Then on a beautiful day in 2004 this happened: I was 8/9 years old and I went with my parents to a flea market in our town. After looking a while between old radio’s, lots of toys, and other things, there it was… Not one, but two pinball machines in an auction tent! My dad decided to bid on the nicest one of the two: a Williams Cosmic Gunfight from 1982. I remember the bid wasn’t even €50 but it was enough to buy it! The other machine was a Zaccaria  Time Machine from 1983 and a friend of ours bought it for about the same price. We took our machine home and my dad spend hours and hours on it trying to understand its mechanics and electronics. I remember that there wasn’t much wrong, but still it wouldn’t play. The flippers were stuck to the playfield with gum, the ball was missing, the playfield was very filthy and also the droptargets didn’t seem to work that well. So he took the playfield apart and started repairing/cleaning everything needed. I tested (played hahah) the machine for hours and hours, it became my favourite thing to do!

After a year or so it was time for something new in addition to our Cosmic Gunfight. We started searching the Dutch Ebay and “Marktplaats” websites and found a machine we thought was perfect for our family: a Williams The Flintstones from 1994. My dad and I went to pick it up and we loved it from the start, so much more to do then the ‘old’ Williams and what a blast to play! We bought the machine in perfect working order so we didn’t have to do much other than playing!

Years went by and games changed, Cosmic Gunfight had to make space for newer machines like High Speed and F-14 Tomcat. On regular bases machines game by just to repair. We’ve kept the Flintstones till 2009 when we ‘upgraded’ to a Bally Twilight Zone from 1993, we needed something more challenging. This was a huge step play wise, but also money wise. It was the first machine I co-owned, and sadly the Flintstones had to leave because of that.. My dad and I cleaned the whole machine, replaced all lamps with LED’s, installed a few mods and changed the original speakers for much better ones!

In 2012 I had the feeling that I was missing something: my own pinball machine! After looking a while on YouTube, I found a YouTuber with the name spida1a. He had a few videos of his own collection and after watching those videos and doing some research, I knew it…. My first pinball machine was going to be a Bally The Shadow from 1994! I searched a machine for sale and there it was…on the other side of our country… Luckily that’s only a 2 hour drive haha! The machine looked almost as described: perfect. The only less good thing was that the cabinet had some dents and scratches, which was not told in the advertisement. But the rest was perfect, no damage to the sanctum and it played amazing. We went there with 2 cars and 5 people because the machine was at a first floor in a newly renovated farm, with glass stairs… Blood, sweat and some tears later we had it in our car and we went on our way home. After setting it up in our kitchen, we plugged it in and.. nothing happened! Luckily the problem were some parts that only last for about 15 years and only cost me €30 but at that moment I was afraid I made a bad choice on buying it. Luckily I never had to think that again and am still very happy with my Shadow! Put Pinball Pro speakers in it and replaced all inserts lamps, ring lamps and back box lamps with LED’s which really made the game come alive. Also I took the whole playfield apart, cleaned every inch and put new rubbers on it.

After a year or 2/3 I bought a Zaccaria Clown from 1985 from a classmate of mine. The machine was in their garage, broken and they didn’t have the time or knowledge to repair it. I bought it very cheap and renovated it completely: new lights, new rubbers, new flipper mechanics (the only broken thing in the machine), replaced some of the lights and cleaned it. Didn’t keep it for long because it was taking a lot of space in our tiny garage, so sold it again.

After I sold my Clown, my dad got a special offer: repair a Williams Fun Fest and if you succeed, you’ll get payed with a (broken) Williams Cyclone! We took the whole EM machine apart because it wasn’t working at all. After long searching and cleaning everything, only a few lamps and coils appeared to be broken. Some other things (like the mechanism for the sounds) were stuck so those had to be taken apart. After finishing it and testing it, we gave it back to its owner and received the Cyclone! This machine wasn’t working too well either: you could start a game but one flipper didn’t work and the other one was weak, also some of the targets on the playfield were broken or missing. At the moment of writing we still have to repair/fix those things.

In February 2016 I wanted to buy another pinball machine, this time I didn’t much research on it and just wanted a nice and fast Bally/Williams machine from the 90’s! That’s why I bought my second WPC machine: Williams No Fear from 1995. This game was bought in almost perfect state, with only the cabinet really faded on left and front side. Right side was not too bad. Playfield is beautiful, no scratches, dents or fading! The machine was modded with LED’s for the playfield inserts, flashers and back box. Also the previous owner added mylar on the whole playfield and washers to protect the plastics. The machine played not super well, the auto-plunger failed to get the ball into the skydive hole, the flippers were weak, the skull almost never moved during talking, it was running very old software and the speakers didn’t sound that great. At the moment of writing I still have to repair/fix those things.

The reason that some of our pinball machines still have to be fixed is because we didn’t have much time to work on them. As you can read in another story of mine (How pinball got me on TV!), we bought a new house that had to be renovated completely except for the outer walls. Also I’m studying Mechanical Engineering so I have enough to do.. :O

Story will be updated when needed. Feel free to leave a comment or ask me questions! PM’s are fine too ofcourse. 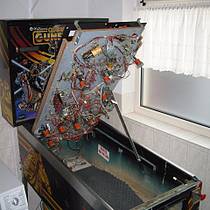 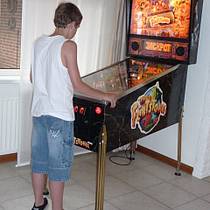 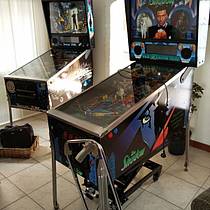 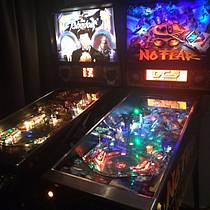 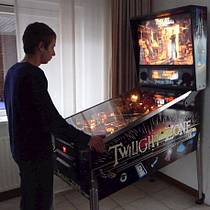 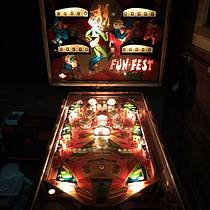 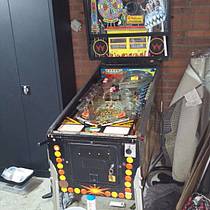 Good pinball story. Glad to read that you are studying Mechanical Engineering, as I have a degree in Mech Eng.

Great story! Thanks for sharing.

Thanks for your story, Rob! Very nice. I think I've seen you and your family on tv :)

A lovely story Rob thks for sharing. Great that those memories as an 8/9 year old still linger. But you gotta get an EM in your collection to sustain the memories!

Thank you all for reading and your nice comments!
@Pinball-is-great I did a good job on choosing my study then haha!
@Grossie Thanks, you're welcome ;)
@Jappie That's great, I hope you enjoyed the episode!
@wayner Haha someday I'll get at least 1 EM, really enjoyed Fun Fest while we had it.

That was a fun read, enjoyed the story. Always interesting to read about fellow pinball enthusiasts experiences, especially when we are in different countries.

Awesome story, Rob. Wish you the best in school and in your future pinball acquisitions!

I enjoyed your story, especially the father-son relationship aspect. I hope that my 12 year-old son will, in the future, share my passion for the hobby.

Thanks Sinistarrett, yonizzell and ZNET, I'm glad you all liked my story! :)
@Sinistarrett Reading other Pinsiders stories is actually one of my favourite things to do on this site, it's so interesting to read how everyone got into pinball and such! Greetings from the Netherlands ;)
@yonizzell Thank you very much, you too with your pinball machines!
@ZNET That's very nice to hear! I'm sure that if you let him help you every once in a while, he'll love it ;)

Terrific story. You should be proud of you accomplishments in re-building machines. Well done.
Cheers from Canada.

Thank you for the compliments wtuttle! Cheers from the Netherlands ;)

Rob, this is such a great story. I hope you are still collecting and doing well in your studies.