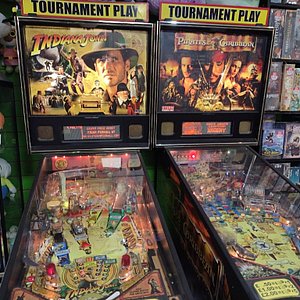 Took a 20 minute drive to the next town over from me to go to Replay Games in Bangor, Northern Ireland this week.

Due to working full time and having my own machine I don't get to go over there that often.

It is a great store which gained its name from the fact it was known for selling retro video games and merchandise in the past. These days the retro games area is very small as they now focus on card gaming and board gaming which I am not knocking them for as I enjoy a good board game and at the end of the day the store needs to make money.

Thankfully they still have their pinball machines in the store along with an arcade cabinet which plays 100s of games.

The two machines they have are both machines from Stern which are:

Indiana Jones 2008 - I have recently played the Williams Indiana Jones when I was in Cork but have to say I enjoyed this game more. Especially because of the great multi ball.

Pirates of the Carribbean 2006 - Another fun machine. It is satisfying to destroy the ship in this game.

I also played Marvel Vs Capcom on the arcade cabinet for a bit which was fun.

All machines can take 50p coins to play. The pirates game will take £1 coins but Indiana Jones game never got converted to the new £1 coins that came out a few years ago so I suggest bringing 50p coins with you.

This is a place worth going to if you are in Northern Ireland and wanting some pinball goodness especially since there isn't many other places to find pinball in this part of the island. 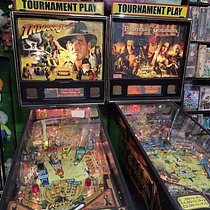 Here's what's awesome about reading this story as I sit in Bangor, Maine.

I love retro games, I love pinball, and I always wanted to visit Bangor, Ireland...and now I k is where two find two dope machines when I visit!