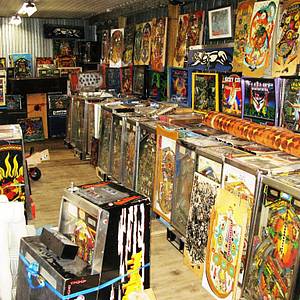 The story of a slave

How I got hooked:

I first got into pinball in around 1979 by going into town as soon as physically possible after school with a mate to play in the Scala Cinema in Rotherham on Bally Star Trek. We'd meet up with some other lads down there and formed a pretty strong team. In those days, when you got good at a game you could play all night and it wouldn't cost a penny 'cos you'd sell surplus credits to on-lookers. I'll never forget the strategy of having to beat the high score by an absolute minimum, ideally as the bonus counted down, you'd tilt the machine just when you get past the high score to milk the credit gaining potential (this was easy on Star Trek ‘cos the bonus countdown was s.l.o.o.o.o.o.w!)... If you made the dreaded mistake of going way over the high score without realising it, you'd give the rest of the game to the best player (which was a guy who's name I never even found out... a sign of when you're really having fun is when you don't find out the names of the people you've been meeting every night for around a year!!)... anyway, his goal was to then clock the machine so that the score wouldn't bump the hi-score up! Everyone would be deadly quiet when he'd do this... this was serious... this was our free gaming future in his hands!! I don't think he ever let us down!

Next to Star Trek was Paragon... I loved that game, it was much more interesting and beautiful than the Star Trek, but it was a lot harder to get free games... so any money I got from selling credits on the Star Trek I'd use to play Paragon!

Since those days, whenever I went to an arcade, I'd always look for the pins, and would rarely be interested in video games... I've often wondered why pinball was so much more attractive, and mainly, I think, it boils down to the fact that every game is unique, the ball will never take the same path, rubbers perish and wear, the game constantly changes, and you have to adapt your timing etc to account for it... it's the real physical world where not only flipper timing was needed, but nudging was also essential... Unlike computer games that were a repeating electronic programme that will do the same thing every time providing the player does the same thing... there was a randomness to pinball that made each game refreshing! Also you could get free games!! (a very important factor for a kid with working class style pocket money!!).

How I became a slave:

Skip forward 17 or so years, and a chance sighting of a sign saying 'buy your pinball from me' changed my life forever! I'd never thought of actually owning a pinball, but seeing that sign made me realise it was possible! Naturally I sought out a Paragon, but couldn't find one, so settled for a Bride of Pinbot instead that a local operator had... 2 days later I got a call saying 'I've found you a Paragon'... of course I couldn't resist... and OK, having 2 pins was crazy, but why not!... little did I know that this would be sane compared with what was to come!

2 years later I was bored with the BoP and decided to find an alternative, so I started to look on the net for games... this is when I saw all the information out there and that there were other people who were very into pinball!! My enthusiasm mushroomed and I started seeking old gems that brought back nostalgic feelings along with weird and wonderful games that I never even knew existed! I didn't have space for them, but that didn't stop me! I got a lockup garage, a van, more storage at friends, another lockup garage, another van (when the first became full of games that I couldn't put anywhere).

I started tucking them around the house... I even slept on them, making a bed out of 4 cabinets on their sides... a very stable and perfectly sized base for a double mattress!! Distance didn't stop me getting the games I wanted badly... I flew to the States once to buy a Black Hole with the spinning disk (the exported European version doesn't have this, or the infinity effect backbox)... the seller wouldn't pack it for shipping, so I flew there and stayed in his house for 3 days while I built a crate to put it in! I was buying games in bulk to get a good deal and selling the ones I didn't want to pay for the ones I kept... I'd lost control of pinball... it was in control of me! I'd become a kind of slave... and I was happy there! :)

It got to the point where I had around 130 games and I was in total gridlock... 2 vans full, a garage in the UK, another in Belgium (where a lot of games came from), 2 van-loads of games at a friend's store, games around the house... but only space to have 2 set up at any one time to play! My garden was so small I could only build a shed that would hold about 4 pins!! London is not a pinball friendly place to live!! I was starting to wonder if pinball was a hobby or a disease!

I had to either sell the games or move house!! I decided on the latter (what choice does a slave have?). Luckily I found a place with an absolutely massive garden (for London!). 2 years later and 'The Shed' was built! Finally I could have all my games in one place! I was then able to get the number down by actually getting to games to sell the ones I didn't want to keep, with the intension of having around 45 games in the final collection... The Shed, however, never reached its intended purpose and remained a store instead of a luxury games room for many years... the arrival of kids slowing down progress considerably...

I now live in the Czech Republic and have moved all my games to a store over here at the end of July 2011... The Shed, along with my house, is being rented out in the UK, and the tenants are making full use of my intended pinball heaven by living in it... they prefer it to the house!! (OK, they're actually going through a seperation, and the shed is providing a way for them to live seperately while still being close to there kids, the wife chosing to live in there... you see, pinball can keep families together!!)

The next job is to build a new games room out here so that one day I'll have the pinball heaven I've dreamt of all these years... I'll probably make it a touch bigger than the old one so I can squeeze a few more in though... the keepers stash has grown since I built the first one!! ;-)

Thanks for sticking with me on my pinball journey, and I sincerely hope it doesn't take over your life as much as it's taken over mine... but if it does, I hope you enjoy the ride as much as I did! 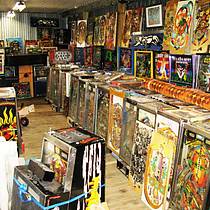 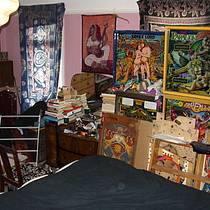 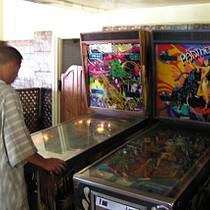 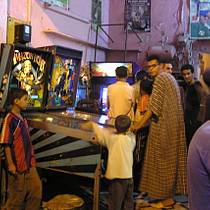 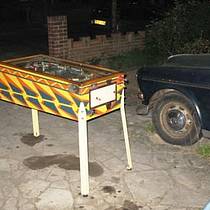 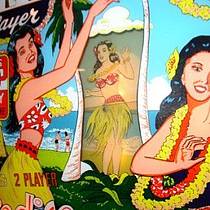 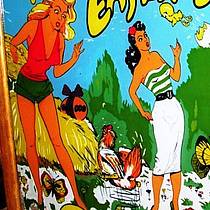 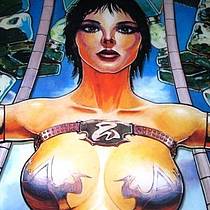 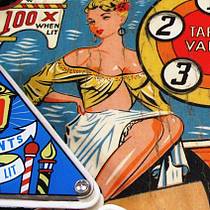 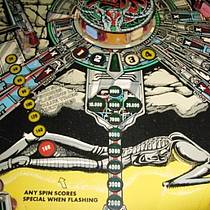 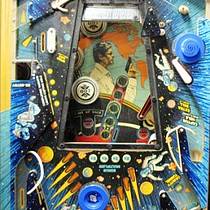 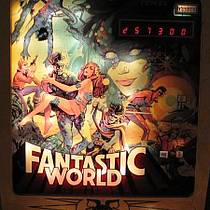 It took quite a bit of planning, but all went fairly smoothly... 2 articulated lorries, 3 helpers at each end... no hernias or broken bones... but I broke one of the most attractive glasses I had displayed in my old games room, which was a bummer! So many others could have got broke and I'd have not cared...
There was a time when you could find pins in Czech, and I've bought games here before (TZ, IJ etc at good prices), but the Germans have invaded and bought all the good pins from the operators to make a good profit on them in the strong German market, so it's very hard to find there here now!

I enjoyed your story. I grew up about the same time and remember selling credits off to other kids. I wonder if that guy that clocked the game back then still plays.. I recently moved just one pin and it was within the same city but still required planning. I could not imagine the undertaking you had. Hope you build a great gameroom and thanks for sharing your story.

Thanks for your comment Silverballer, I've often wondered myself if that 'score clocker' still plays... it would be crazy to meet him again... funny how I don't even know his name, but that's how it is as a kid :-) I've almost always got a pin in the car what I make a big trip... I'm now in Germany driving to the UK on a business trip, and have a pin in there that a guy in the UK wants (I've got 3 of this particular game, so letting one go is no problem!) and on the way through Holland I plan to pick another game up for another guy in the UK... and am looking for what game (or 2) I can pick up on the way back... :-) I try to combine pretty much any long journey with a pin move of some sort!

What does it mean to "clock a score?" Haven't heard that term before.

Maybe that's an Eglishism... it means to make the score go back to zero... to go over the max score achievable with the digits of the game... so on Star Trek this means going over 999990 (only 6 digits). When the score is clocked, the game doesn't recognise that the score is actually over 1million (in this case), so you won't get any credits for beating the high score, but more importatntly, you won't bump the high score up too much so that future games can win credits by beating the high score easier. ;-)

By the way, the 'clocking' term comes from cars... in the UK, we'd say 'what's on the clock?' to mean how many miles has it done, or 'It's been round the clock' to mean that the mileage has gone all the way back to zero... I guess this term's not used in the US?

Very interesting story. Very similar to my own. Pinball is an addiction, isn't it? Happened on to your page when I noticed we have many of the same games.

Nice to see a like-minded collector Mr Walton :-) Yes, addiction it is indeed... but not as socially un-acceptible as heroin ;-) I was going to say 'not as life destroying' but after contemplation I decided it might not actually be true, having never actually tried Heroin, and knowing that my life is certainly a lot more complicated with the pinball habbit :-)

Wow, great story.
It's a shame we don't have collectors like you in Blighty any more!

I'm still not sure it was the right thing to move... One thing I miss is the pinball community... it's pretty much zero over here!

WOW! That was a great story. You certainly are one of the greatest collectors. I admire your enthusiasm and your passion for pinball, and the fact that you are in Europe, in 2 hours flight distance from me, really excites me . Wish to have a collection like yours one day. Great job mate!