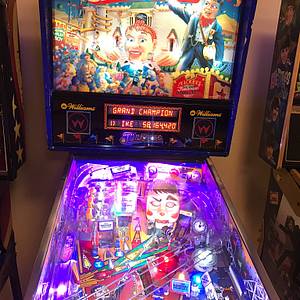 Hey Slick! You’re Up... Or how Funhouse started me down the rabbit hole!

As a teenager in the 80's I spent my time and most of my money in the arcades, but always loved pinball. Though pins seemed rare around me, if I found one, I played it. Mostly because the chance to win a game and the lack of a 'pattern' that video games had at the time made each play unique. If I fast forward past college and into adulthood, a friend of mine lived in a home he called the House of Fun. One year he brought home a Funhouse machine. I'd never had that kind of regular access to a pin, and literally every time I went to his house, at least half of my time was spent on that machine. For several years I owned the high score and ultimately ended up having first right of refusal if he ever sold it. I didn't realize until later that was my fall into the pinball rabbit hole, I was obsessed with the machine, a good game, and hitting shot combinations.

Again a few years later, and now just a few years ago, my chance to bring home the Funhouse became real. My wife was open to the idea so I jumped on it! As my first machine, and one needing a little work, my introduction into this community came shortly after. Thanks to Peak Pinball, the corroded batteries were removed, the board rehabilitated, and the machine was cleaned, tuned, and ready to go. The often heard 'no more pins needed' was said in my house too. It wasn't until the family went to The Pinball Hall Of Fame in Vegas that the next machine was identified. My wife and youngest became hooked on South Park and the often heard 'just one more pin' was uttered in our home. I found a players South Park, and it came home for Mother's Day. Now for sure, I'd fallen down the rabbit hole.

The rest is a familiar journey to many here, next came KISS as we are huge fans and a 1996 show was an early date for my wife and I. Then a beat up Galaxy from my local bar was available for 'free'. Already in the rabbit hole of course I said yes. Like any 'free' puppy, free is relative, but it really is a great game to play so it has stayed despite the need for regular money and service. All these things called 'mods' took me further into my obsession and I learned to work on the machines, lost my fear of making something worse, and realized that the games brought me relaxation and happiness at an unexpectedly high amount. I suppose a blessing of 2020 has been the need to look inwards for fun and sanity, and pinball has stepped up big in our family. My youngest revels in the role of 'Official Rules and Tips King' and has made playing our Star Wars even better. When the 4 of us, plus my dad are all playing together, I take a mental picture to savor later and count the blessing of how this rabbit hole has brought our family closer together. Simply amazing. Now we only joke about 'no more pins' but everyone runs out of space and we almost have. While we wait for our Avengers Infinity Quest, we have ranked our machines in case one has to leave in the future, and are talking about any new pins being 'rotators' and just a limited few themes being possible to bolt to our floor. I guess I've fully arrived to the hobby.

Coming full circle, despite 8 other machines nearby, the feel and play of Funhouse remains at or near the top for me. The smooth stainless lockbar, and simple but satisfying shots keep me playing at least a few games every time I play. It feels the best in my hands when I step up and hit start. I even crushed my personal high score recently, keeping the game interesting and never boring. I'm thankful for the joy pinball has brought me, the impact it has on my family, and the relationships I've built in this community which remains mostly free of the vitriol found in other social media communities. Thanks for taking a moment to read my story. 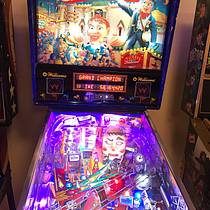 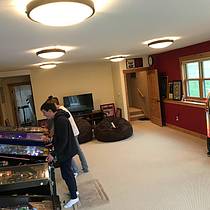 Enjoyed reading your story. Nice high score on Funhouse, mine's much less than yours. Funhouse is a favorite of mine as well, so happy to have it as part of my meager collection. As someone who is hesitant to tinker with things, I appreciated your comment about not wanting to "make things worse", I'm trying to get past that fear myself.

I enjoyed reading your pinball saga. I was born the same year, and in the late 70's- early 80's I rode my bmx bike many miles to find the one pin in an arcade of vids. cheers, ron kruzman