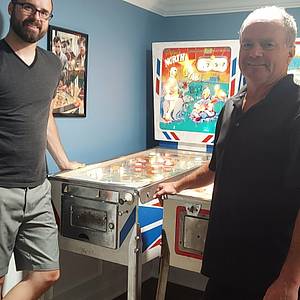 Growing up, my father always told us about the arcades and his love for pinball.  When I was in high school and college, I always thought that getting dad a pinball would be the ultimate gift.  In early January of 2020, dad and I went out to breakfast at a local café in Edinboro, PA and pinball came up in conversation.  I asked him what his favorite one was in the arcade.  He said, "North Star" and then went on to tell me everything about the game.  I immediately saved that name into my phone and the search began.  I had no idea what to do other than start searching for online communities and found a collector named "surfchamp" on a collector's database who was located about an hour and a half away.  I feel that he may have been a little reluctant to sell one of his babies to me but I think that knowing that it was going to be a gift for my dad was enough to convince him to let it go.  A few days later my brother and I were on the way to meet a new friend named Knox located in Summerville, PA.  I knew nothing about pinball machines and this was the first time I actually looked inside of one.  When we were loading it into the truck Knox said to me: "Just so you know, this won't be your last one."  At the time I thought "Ok, this is a gift for dad."  After a couple weeks, I was done repainting it back to its original luster and making sure that everything was working 100%.  A few days before dad's birthday, my older brother took him out to dinner and in the meantime, I was able to get the machine into his basement with the help of a friend.  Afterwards, my brother told dad that I was going to meet him at his house, and we were all going to shoot some pool in the basement.  Dad made it halfway down the steps and saw the corner of the cabinet and said, "WHERE IN THE WORLD DID YOU FIND NORTH STAR!?!?" I replied with a "happy birthday" and he gave me the biggest hug.  He stood over the machine quietly for the next 30 seconds or so just staring at it seemingly in shock.  He looks at me and says, "Does it work?" I nodded.  He pressed the start button and loaded the first ball.  The sound of the bells as the ball rolled through its first switch brought the biggest joy to his face.  He played a few balls and then turned and gave me another big hug and just said "I can't believe it."  I reminded him that he told me his favorite game a few weeks prior at breakfast and I was so thankful that I was able to find someone willing to sell it.  After a couple more balls, dad turns to me with his finger in the air with a smile and says "Now, did I ever tell you the name of my second favorite pinball machine?" We both laughed.  I asked him when the last time was, he saw a North Star.  He said that it had been 50 years.  Since then our collection has grown quite quickly.  At the time that this is written, Randy has three machines that he played in the small local arcade when he was a young teenager in the late 60's and four others.  My collection has expanded beyond a dozen games as well.  We are still on the hunt for that elusive "second favorite" game called Tropic Isle.  We've learned so much from online communities full of complete strangers willing to help one another.  Bringing 50+ year old games back to life has been such a fun hobby for us to share together. 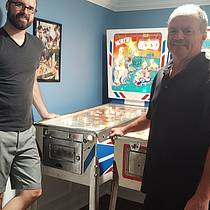 Update: Since this was originally written, we have tracked down a Tropic Isle and it is in dad's lineup. Profile has pictures of our current lineups.

Cool story. I remember as a kid going with my dad to his Thursday night bowling league and playing Show Boat there while he bowled....for a dime per game. :)

Great story MJ. Thanks for sharing.

This is pure gold. Honestly, it got me a little misty eyed to think of the look on his face of pure joy and gratitude for this tremendous gift from his son. this is the best father-son gift story I've probably ever heard.

I love it. Such an awesome story!!