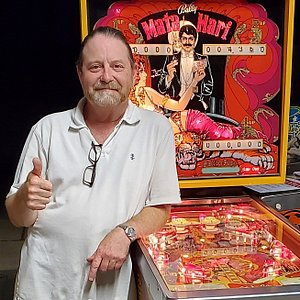 Pinball has always been in my life.

This story got featured & frontpaged on September 15, 2020

Wow, as I begin to write this, I realize that pinball has been a big part of my life for over 45 years. I first discovered these wonderful machines as a kid growing up in southern Louisiana in the early 70's. I was around 11 or 12. When my dad took me fishing, there was usually one in the marina I could play while they got supplies and launched the boat. Back at home, there was a gameroom in the mall within biking distance and I would spend many of my Saturdays there. Even more during the summer break. It had probably 10-15 pins and a bunch of the old rifle arcade games. None of my friends had the passion of playing games the way I did, so most of the time I went alone.

In 1973, a 5 ball game was 10c, and 3 games were just a quarter. I didn't have a lot of money and my mom would slip me a couple of bucks that I could blow on lunch and games. I didn't need to spend much in the arcade because I had worked out this routine: Check coin return slots, push the return buttons for jammed coins, and check the floor under the machines for dropped coins. Oh yeah, and check the credit window for credits. (Most folks didn't know what a match was back then either!) So armed with a few acquired dimes and the occasional quarter, I would play off and on for a good bit of the day with the assistance of one of the step stools that were there. Being a decent player even as a kid, I could win replays. But I would still check the slots and credits during my visit.

I still recall some of the games I played there. This gameroom was usually pretty busy and the machines were constantly changing. Some of my favorite pins were Mariner, Fireball, Jungle, Time Zone and one called Orbit. There was Gold Rush and a Hee Haw. I played some arcade games too. The only one I remember was one called called Commando Gun. It was the coolest thing ever. Shoot down fluorescent green and orange helicopters with a machine gun. The sounds were great and the background would flash bright red when one was shot down. I would love to find one of them.

This particular place had a lot of influence on my early love for the the inner workings of game machines. The repairman was an older, grey haired guy, and smoked a lot. He was always nice to me and didn't seem to mind my company. Whenever he opened up a game, I was right there beside him so I could view and marvel at all those mechanisms. He would sometimes let me stand on a stool on the side of a pinball and point out what various parts and mechanisms did. One of my most vivid memories was when I saw inside the Commando Gun game for the first time. My mouth and eyes must have been wide open! That was the coolest piece of technology I had ever seen. He even ran the game with the service door open and I was blown away seeing how the illusion of flying helicopters was done with a simple mirror, glass and tiny models on the end of a rod. Sometimes he would let me hand him tools or hold something if he needed a third hand. When repairs were finished on a game, he would often hit the coin switches a few times. As he locked the coin door he would ask if I would give the game a test. YES SIR, I WILL!

I wonder if he ever wondered what happened to that curious little red-haired kid that followed him around on Saturdays. I just vanished from that gameroom and was never seen again. In the spring of 1975, my dad got transferred and moved the whole family to Birmingham, Alabama. (That was some real culture shock I tell you. But that's another story). After getting settled into my new surroundings, I did some research using the the Yellow Pages and a map. Yes for some of you younger folks out there, the internet was still 20 years away, so we still had to do things manually. YES! I discovered there was an Aladdin's castle in the mall here! I convinced my mom to drop me off there so I could play some games, especially pinball. I got to the mall and marched into the S-shaped, darkened hallway entrance of Aladdin's castle armed with a pocketful of change. A large trash bin under a large sign said "No food or drink allowed past this point" Then I knew I was close. It was so exhilarating to feel the energy of a gameroom again, the distinct smell and sounds that emitted from the arcade got more and more intense as I neared the main room. It had been many weeks since I last played. There would be many new pins that I had never seen before.

What happened next was beyond comprehension and totally unexpected. As I entered the main room I stopped to survey this huge, modern gameroom. I didn't see any pinball machines, yet. "Ok, well they're in another room." I told myself, so I found the attendant. "Sir, where are the pinball machines?" I asked. "We don't have any. They're illegal here." I'm sure there was a dumbfounded, blank look on my face.

Alabama law still regarded pinballs as gambling machines. This was unacceptable. What a stupid state and what a stupid law. I couldn't believe what I just heard. My heart sank. I wanted to move back to Louisiana. Not possible.

So the only time I was able to enjoy playing was when we went on a trip out of state. For me, it was over two years of pinball famine. I did find an old EM in somebody's garage that I was able to play occasionally. Luckily, Roger Sharpe saved me when he proved to New York lawmakers in 1977 that pinball was a game of skill, not chance. Alabama and many other states soon changed their laws when New York led the way. Pinball began to show up here about the same time I turned 16. I was ready for sure.

In my opinion, the late 70's and early 80's was the best time to play pinball. This was the time when the big four manufacturers were routinely cranking out production runs of several thousand machines. Some of the most iconic and classic pins debuted during this peak. Pinball was everywhere. Malls, grocery stores, gas stations, laundromats, bowling allies, even company break rooms.

The main innovation in 1977 was the transition from electro-mechanical to solid state. Besides being very cool technology, I loved the new SS games because they scored every hit. In an EM game, you could potentially score a hit and the machine would not recognize it. This usually happened during a 50 or 500 point cycle. EM technology could only handle one scoring task at a time for the most part. Sometimes you would have to make a shot again because the machine was busy and didn't register it. I remember making multiple drop targets and shots in Mata Hari. The machine would award every single hit. Sometimes you would have to wait a few seconds to let the scoring catch up! The other great thing is the machine had the ability to remember the state of targets and rollovers for EACH player. When it was your turn, the playfield ABCD lanes, features, etc. were restored to how it was at the end of your last ball. Stern's Meteor took this one step further and was able to remember the state of the top drop target bank!

There was this convenience store that had a sign out front that said "Talking Pinball". Who could resist stopping to check that out? Inside there was a new Gorgar and whoa, the thing TALKED! I didn't like the play of the game all that much, but it was sure worth a quarter to hear it taunt you or admit defeat. Also, the heartbeat sound would get faster the longer you played. That was a new feature.

I had a few favorite places and machines. There was this pizza joint close to where I worked that had several machines. Notably a Lost World and a Sinbad EM. Two of my favorite machines of all time. I spent my breaks playing Sinbad mostly. There was a 24 hour convenience store close to the house that had a Mata Hari. I would sometimes go there after midnight and play when I could have the machine to myself. Do any of you remember having to put your quarters above the lockbar to signify you were in line to play next?

It was time to find my own pinball machine. I ventured downtown to look into buying one. I visited this route company named G.A.M.E.S, One thing led to another and I started going there in the evenings, sweeping floors and shopping out pinballs for him. I wanted to learn how the games worked. Besides, I got to play for free. Under his guidance, I quickly figured out how to fix EM games and got good at it. He was thankful for the help.

In 1980 I worked at a department store and played machines that were in the mall during breaks, the store manager mentioned he had a pinball machine at home. He was moving and didn't want to take it with him. It didnt work, so for $100, I brought home my first game, a 1972 Outer Space. Actually remember playing this one somewhere as a kid in that old arcade. Well I brought it home and made it work. Kept it awhile, put it on location in an ice cream shop, eventually sold to someone I don't remember who.

This is still a work in progress. If you read this far, I hope you enjoyed it and have similar stories you remember.

Working at BVC. Pinballs were everywhere 1977-1983. Unboxing pins and arcades all day. Pinball tech from 1981-1990.  Refining EM knowledge to master.  the meteor we played at sailmaker restaurant bar. bought that Meteor in 1981.nstlill have it. Sinbad as a greenhouse. fix fix fix everywhere. Putt Putt. Skate rinks. Not many EM's to find here in homes because they werent legal till 77.

This page was printed from https://pinside.com/pinball/community/pinsiders/meteor_rick/stories/pinball-has-always-been-in-my-life and we tried optimising it for printing. Some page elements may have been deliberately hidden.