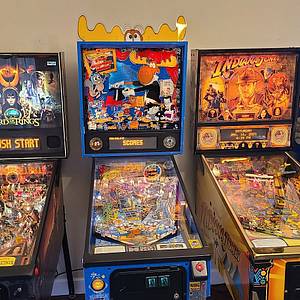 Why Pinball. Why am I so mezmerized by pinball machines? It started at a very young age in St. Louis where my uncle owned an old electro-mechanical machine that almost never worked. It was down in his basement and everytime we visited I would run down and see if it was playable. Usually it had laundry piled on top of it and I wouldn't be allowed to even ask to play it.

However, one time it was up and running and my uncle let me play it! It was the highlight of my visit. My uncle also worked as a bartender at a neighborhood bar. Every once in a while we'd visit him there and I could play the one pinball they had there. So my uncle put the bug in me. Thanks Uncle Tommy!

Later in life arcades started to open up and as a junior higher, we'd visit there all the time. It mostly had the new electronic arcade games, such as Pong. I found out that if I rubbed my feet on the shag carpet I could 'shock' the coin changer and get a free game. This was a great find and made me popular with my friends when I showed them this trick. That not withstanding, they did have a few pinball machines, and I always gravitated towards them.

In high school, it was visits to the local Sonic where I was able to play pinball. I spent a lot of time there. College was mostly spent playing Pool. But the Pool Hall had a few pinball machines too. So while I should have been studying, I played my fair share of Pinball.

Fast forward, past marriage, past having kids and being transferred to the East Bay area of San Francisco and buying a home in Brentwood--we found a restraurant called 'Boardwalk Pizza' that had a room full of Pinball machines. This was back when restaurants were starting to put together web sites with their menus. Having some expertise at this I made a deal with the owner to build them a web site and administrate it for them in exchange for the Rocky and Bullwinkle Pinball machine they had in their game room. I had scored!

The machine was extremely well used and needed lots of work. So this was my first time shopping out a pinball machine. This taught me a ton! And I loved it! That was over 20 years ago and I still have that game and keep it in top working condition. That one will stay with me till I die.

Over the past year, I've purchased a number of other Pins. A neighbor and his brother had collected a bunch and have been slowly selling some of them, and I've been more than willing to help him with that task.

So as of this writing, I own 7 Pins and love working on them. Probably as much as playing them. I'm a grandfather now and me and my grandkids have mini tournaments. I just wish they wouldn't continually hit the flippers, even when the ball isn't anywhere near the flipper!

I'm looking for many more years of pinball collecting, fixing and playing with my family. What a great hobby we have. - Mark 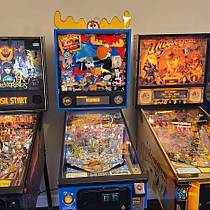 Wonderful story. Introduce the grandkids to the Rocky & Bullwinkle show. The game is more fun if they know the backstory. "Save Nell".

Thanks for sharing the great story!

It’s great to hear that you can connect with your grandkids through pinball and teach another generation about this amazing hobby. Thanks for your story!

Nice story. I read a lot of these stories and they all seem to be similar to my experiences. I too like fixing them as much as playing. It always brings me back to memorable times.

Awesome story thanks for sharing

This story sounds alot like my own but yet to collect as many machines I live in st louis and am now a grandpa as well good story thanks for sharing it.

Great Story Mark. I swear, sometimes when I read other people's stories I think we must be long lost brothers. The fond memories of going to the arcade and playing the games. I didn't connect with pinball until years later, but I'm making up for lost time.

great story and good pic of a nice R&B. question, what angle is your machines? I am usually used to seeing dataeast games tower over sterns like your LOTR.