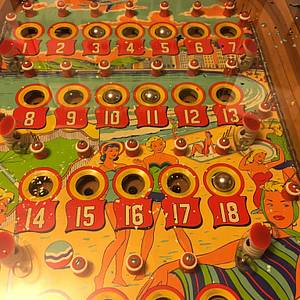 The saga of the Bingo Pin

At the pinball show I had the chance to play some Electro-Mechanical (EM) pinball games. The relatively simplistic gameplay didn't appeal to me as much as the flashy electronic systems. So when a notice popped up on my computer for an "old pinball game for sale - non-working" I didn't hold out too much hope. But I like a challenge and I had a spare spot in the room, so I went down to the pawn shop to take a look.

It was indeed an old one, wooden-legs and all. The playfield looked different than any pinball I had ever seen, just a bunch of holes rather than bumpers and scoring slots. But looking closer, it appeared to be in decent shape: The backglass was pretty bad but the playfield showed little wear, we opened the back and I realized it was a EM pinball of some kind and the motors, gears, etc. all looked in great shape.

My initial thoughts were that since it looked so good inside, all I needed to do was to pop in a new fuse and it would probably run. We negotiated a price, they removed the "cash box" and took 100 or so nickels out of it, handed me the keys and for the price of a good dinner I was the proud owner of.....something.

I got it home and did some digging, it turned out this thing was a "Bingo Pinball" and they were used for gambling - who knew there even was such a thing! They were pre-electronics and are quite complex, with advancing odds and coin tracking, all using physical equipment rather than electronics.

I checked the fuses and they looked good, so without any knowledge of these mechanical beasts, I knew it was time to start posting for help on Pinside. I soon discovered there was a "Bingo" forum on Pinside dedicated to this sub-class of pinball and populated by friendly folk always eager to help a newcomer. With lots of advice (some conflicting) and links to schematics, I set to work.

I also discovered that my Bingo was relatively rare and that a replacement backglass would be extremely difficult/impossible to locate (typically defined as unobtanium) so I decided to brush off my limited Photoshop skills and see if I could scan in my existing backglass and clean it up enough to make a new one.

My posts for help soon attracted the attention of a serious Bingo collector who wanted it for his collection and we began discussions. Unfortunately I am on the West coast and he is on the East coast and the cost of shipping makes it prohibitively expensive.

Things went on like this for a couple of months. I spent some time tinkering with the mechanics, growing to appreciate the amazing complexity of the mechanical systems while failing to make much of an impact on its ability to run. I also spent considerable time getting the graphics cleaned up in Photoshop.

Just when a small breakthrough led to the lights coming on, I got another message from back east. He really wanted the Bingo. He wanted it a lot, and since I had no special attachement to it, and quite frankly liked the idea of this pin heading into a museum, I agreed to sell.

The problem was still the east coast-west coast thing, until I found out just how much he wanted the Bingo. He was driving out to the west coast just to pick it up! A 3,000 mile road trip to pick up a Bingo Pin. This shows the dedication and appreciation these units have for some people.

I was sad to see it go, I never finished my backglass recreation but my Photoshop skills have improved a lot, my mechanical skills have improved a lot and the legacy of my "first" Bingo Pin is that I have grown to appreciate the EM (Electro-Mechanical) era of pinball machines in a way I never thought would happen and I am now actively looking for a EM "project" pin. Quite frankly I can't wait to open it up, repair it and get it working! 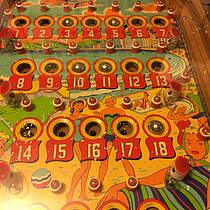 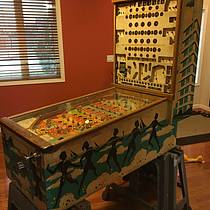 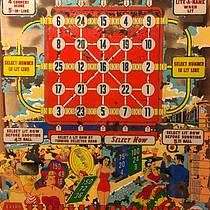 Sounds like a good experience for all parties. It's ok to have a preference in pinball, just like certain eras of cars or motorcycles.

Where is the museum located on East Coast? Would love to put on my list of stops
Thanks for the story

That's more like a 6,000 mile road trip. The cost of that kind of trip is probably much more than what NAVL would charge to ship it to him. He must love to drive!
Great story. Hope you get an EM pin soon.

That had to be Bingo Bob and his son. I too sold him a hard to find United Bingo called Tahiti. He drove to St.Louis and left like 1:30 in the morning to get to St.Louis by 4:00. It was great to meet the legend in person. Thanks to Dennis Dodel for sending him my way.
Anybody looking for a 1948 Bally Gold Cup One Ball Horse Racing machine. I have one.

If you are still itching for a Bingo type machine, there are two in Phoenix

I have SEVERAL Bingos. If anyone is interested in one, I can help them find what they want.

Last I heard they were working with the city gov to set up the museum. It will be in Pennsylvania, probably the Pottsville area.

Awesome story, there are a couple i would drive for!

Thanks for the responses!
Pinball brings out a lot of passion in people, its an exciting activity and community to be caught up in

What a great story. I've owned a few bingo machines years ago. Holy smokes they are complex and certainly put me in my place a number of times trying to get them running.

Driving 3000 miles both ways for a machine is EPIC. I think owning pins is not about just playing them, but the adventure finding, tinkering and bringing some back to life that's the real payoff. Pinball people are the best.

Loved the writing style of your story. Excellent piece, as polished as a journalism major would have done.

I remember these BINGO pins in the old pool hall in the little town I lived in, back in the 1950's and early 1960's. Everyone knew they gambled with these and most everyone in town turned their heads and allowed the 'boys' to have fun. Every so often the old, kind of fat, city policeman would stop by on a Saturday night and walk into the pool hall. Guys would keep playing pool and if anyone was on the BINGO pin they would slow down and eventually quit playing while he was wandering around inside. It was an old and small pool hall, and the owner was paralyzed in the legs and moved around collecting money for pool games, in his wheelchair. You had to be 18 to legally be inside and since I was just 15 or so, I would always freeze up and try to not be noticed. It always gave me the heebie-jeebies to go in there anyway. Lot's of beer drinking and sometimes fights would break out and glass bottles would fly against the wall and broken glass be everywhere.

The old man in the wheelchair would tell the policeman that there was no gambling going on and he would reply with a wink and a nod, "Well, boys . . . you know the rules about gambling. I don't want to come back." When he would leave, I would breathe a sigh of relief and the wheelchair man would roll up to the BINGO pin and pay the player the money he won on the 'gambling'! He kept change in an old carpenter's apron around his waist and money constantly changed hands . . . that is . . . until the policeman would roll back in, then things would go back to looking all angelic. :)

Pintucky - what a great story!

As an addendum to this tale. He called my once he got home and said he had found the problem with the Bingo. He had it up and running in 5 minutes.....

......by using the "short the fuse and see where it smokes" method of troubleshooting!

I do not think I could ever be that brave, but he found the shorted wire, put it back to where it belonged and the Bingo lives!