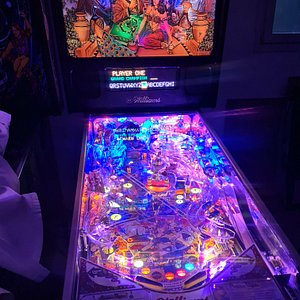 I am a child of the 80s and in the 90s as a boy, in northern Italy there were many arcades with pinball machines. however I used to play the great classic games, golden axe, final fight, turtles etc. In the early 2000s various pinball machines arrived in the village bar, including medieval madness, theatre of magic, monster bash, addams family. I played a lot, until they disappeared, and in their place slot machines. :( I never +  played or thought about pinball machines. Ten years later I saw an ad by chance, a boy said that pinball machines had become an obsession and he couldn't do without them anymore. Intrigued, I browsed through ads and got my first pinball machine, bride of pinbot. Since then I love and collect williams/bally pinball machines from 1990 to 98. I have over 50 pinball machines and I devote my time and love to them. This is my story...and he was right it's a beautiful obsession :)