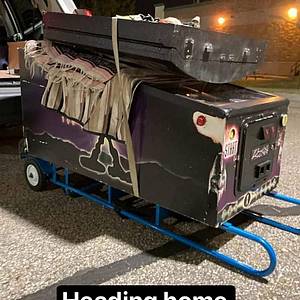 Queequeg's Qurse: A Journey from X-Files Obsessed to Pinball Obsessed

At the beginning of 2021 I knew only two things about pinball: It was an easy way to spend a loonie at a bar, and if I ever happened to see The X-Files pinball machine in the wild I would almost certainly spend too many loonies on it. As an "X-Phile" I was aware of the existance of a pinball machine based on the series, and I considered it to be the ultimate piece of fan merchandise. I had only seen photos online, and thought I would probably never encounter one.

In July I was on vacation when my friend and fellow X-Files nerd (to an even greater extent than me) BUB texted me a photo of The X-files pinball - a true friend knows when such a discovery must be shared. Immediately I flooded him with questions: "Where is it? How is it? Why am I not there?" When I returned home we made our first trip together to the arcade. Seeing the table in person was beyond my expectations - I was captivated by so many details I'd never noticed in photos. The machine is a true love letter, in addition to the obvious horror themes it captures the humour and heart of the series. From the picture of Scully's pomeranian Queequeq under a ramp to the oddly cute DMD animation of Mulder severing the Flukeman monster in half, there are so many references that make me laugh. There are plenty of interesting details to draw casual fans to the machine as well, such as the models of the Flukeman creeping out over a ramp and an Alien baby in an Erlenmeyer Flask, as well as the interactive filing cabinet at the centre of the playfield.

During that first visit I met BUB's friend GHK and the two of them showed me around the arcade and taught me the basics of pinball. I quickly learned that the same level of care and detail I appreciated in The X-Files was present in so many other machines. While not a huge fan of The Flintstones I could appreciate that the table captured the same lumpy plastic rock aesthetic of the movie. I began to appreciate pinball as a medium for storytelling and loved finding unique details in each machine that contributed to both the theme and gameplay.

On Halloween night there was an event at the arcade with the ultimate door prize: all attendees were entered to win a pinball machine. As we drove to the arcade we saw a few fireworks going off on the side of the highway. As an X-Files fan it can sometimes be hard to intrepret whether mysterious lights in the sky are a good or a bad sign, but something about it felt like the best omen possible. All I knew was that I wanted a friend to win. As someone just beginning their pinball journey I didn't feel ready for my own machine yet. GHK already owned a few but BUB did not, and although I am more of a skeptical Scully type I found myself crossing my fingers and wishing with all my heart that BUB would win... and he did. When his name was drawn he was offered a 1976 Sonic Faces table completely free, or a substantial discount on any of the tables the arcade had for sale. Of course it had to be The X-Files.

To go from admiring a photo of this machine on my phone to holding the legs in place while GHK lifted the machine and BUB tightened the bolts in the middle of his living room was surreal. To be able to spend entire nights with my friends exploring every aspect of this machine has made me fall even more in love with it than I ever thought possible. It will always hold a place in my heart as the table that started my pinball obsession, and knowing it belongs to the right person means the world to me. It almost feels like an X-File - an unexplainable series of events leading to something strange and wonderful.

Leilakalomi edited this story on December 13, 2021. 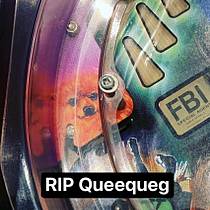 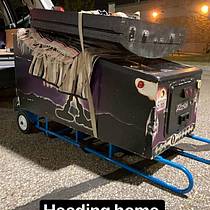 Awesome story! I have always had a pinball obsession. But a couple of years ago I started my addiction and now have 6 machines.

The truth was out there. Congrats on getting to play it and thanks for sharing a great story!
Have fun here on the site!

Very cool story. My daughter is obsessed with x-files and has been begging me to find one for her. You’ve reinvigorated that search

Welcome to the hobby! I'm an X-Phile too. I haven't watched every episode yet, so I still have some highlights to look forward too. By the way, Erlenmeyer flasks are conical and beakers are cylindrical.

Love this story, and I have the X-Files pin at home too. I made a tv mod for it that plays clips on loop. You might like something like that for yours.

I owned an X-Files. It is a beautiful but brutal game. The ramps are so so so narrow. The modes are amazing and the multiballs are great.

I restoring one, still missing some part, but its a stay in the collection peace! I always love the show as a kid, when it was new, I cant wait to play.
Good to read stories like this.

Do you have any series related props or collection items? Because would nice to reed game Topper or Pimp ideas from someone who truly love the theme!

Wonderful Story, these stories often inspire me, sometimes make me feel like my authoring skills are nothing compared to other pinsiders and sometimes make me relate to there experience. At any rate, its always wonderful to hear them all! Merry Christmas Canada!!!

Great story! We got an x-files machine in 2021 and we love it, unfortunetly our file cabinet on the machine is broken.

If anyone knows of a place we can get a replacement, that would be great!