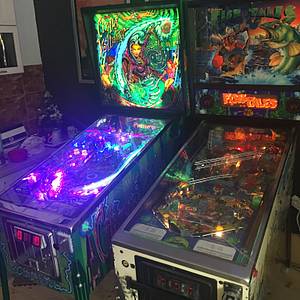 My pinball journey started in early/mid 90's when i was 12years old . Arcade rooms were all arround country with pins and arcade machines inside .

My dream since i played pin first time was to own pinball machine . Now after 20years i have few in my collection and thats just the begining , but road was full of obstacles and pain.

Owning a pinball is not small thing , especially like in my spot where you comin from poor country with very low standard , with limited number of pins and with big difficulties finding / importing machine in country.

I am coming from town known as pinball heaven. In my town there is one nice person i meet and he was the first pinball importer for Ex.Yugoslavian market .

So , you would say whats problem than to find any pin? Well now in 2017 in my country exist no more than 400pins . Everything is exported to Usa,Australia and Hungary and other euro countries.

So , this is just the begining of my hell. You asking why and what happened.?!

Well, first of all i meet that guy who imported/exported tons of pins and i wanted to visit and see if i can get any pin , but situation were bad , either bad titles or poor condition or big price and not worth efforth.

Than i enter circle of pinheads and found out more people who either resell or repair or collecting . But cose i am coming from town where bigger reseller live they think i am buying for him or that he sent me and nobody want to talk with me. As you know its very small world / circle of people. Thats where my troubles start. You ask why not import, well if i want to import i had to pay extra 35% on total price (plus min 500$+ for ship) and that make me no chance of importing anything from abroad.

To cut big story short, 5 years ago you could buy twilight zone here in 8/10condition for 500$ or mint indiana jones /adams family for 1000-1500$ .But than sellers found out internet and real prices in the world and they increase asking price. Or they sold bulk 32 or 74 pins(thats how many can fit in container) at once to other resellers in the world .

So, basicly i was late at least 5years.

Even i meet other collector / restoration master , he have few pins from my wish list thats willin to sell buy he told me i have 5 people before you so sorry i cant sell to you .

So, i was pretty devastated in that time , i am seeing and playing game,  having money but i cant have game that i dreamed of .

Some other collector / reseller also told me i am New here and i am small player , so basicly all doors shuted down and no chance of getting anything...

Than out of sky friend of mine helped

me out to get some pins from abroad and find me cheapest way to import for me (dont ask me how !:) ) and some dream titles start gettin in ... so me and my family( basicly my brother and wife ) can finally enjoy pinball game as it best .

That was the begining of our journey ... big battle and big dreams and finally they are real/become realty!

Next step is to get all pins from our dream list / build garage / pinball arena and than i will make another story ;) . 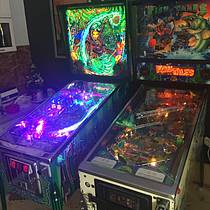 I am happy that you are finally able to get some machines. I hope you get all the machines you want. Maybe one of these days, the people calling you a small player will need to buy some machines from you!