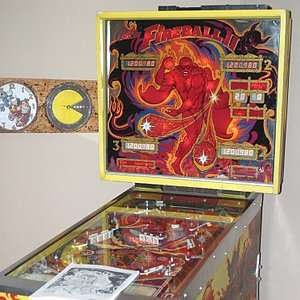 A trip into Pinball with Fireball II

I was always an arcade player, the primary reason being that I had money. I rarely had money to play pinball, and when I did, I was usually no where in the vicinity of a machine. This was in the early 80's. Fast forward to the spring of 2006, and I finally bought my first arcade game, Donkey Kong, which was always, and still is, right at the top of favorites. It was sometime in August of that year, that my wife was saying that she wished she liked arcade games, reason being was simple: she wasn't good at them. She was a good pinball player though, so I started looking around on ebay and sitting at an ebay office in Jacksonville, Florida was a Fireball II machine being sold as is for $300. It was a dead machine, and advertised as such.

I took a swing and bought it. Drove down to Jacksonville, loaded it on to my truck and brought it home. We were getting ready to make a big move, so the thought process was: I can get to it once we get settled. I had no idea what the hell I was doing, but that was ok, I can figure it out later, which was what I told myself. So, sometime in March of 2007, I started digging into what might be wrong with it. Found Tom Callahan on the web, and gave him a call. We talked for a bit (nice guy btw, very helpful and considerate)... and about a week later, a Tom Callahan Mutha board arrives and now we're on. Put it in, and the game fired right up. It didn't work very well, but it fired up. So, one thing led to another and I started figuring out how to make adjustments. Steve Kulpa was instrumental around this time, and he did some work on my SDB board. I (we) had a lot going on, hunting for a new house and all. Moving day came in May of 2007, and it was at this time that I decided I wanted to get a good working machine for my wife. It was narrowed down to two by me, because I wanted to surprise her, the two being Pirates of the Caribbean or Lord of the Rings. I settled for LOTR because there just happened to be one on sale on ebay, the only owner of the game. I contacted him and we talked and concluded the sale, for $4500. But I wasn't done, at about the same time I found a Dungeons & Dragons machine for $900 on ebay. I had the bug, and I had the money :D

Delivery day came, and it was, ironically, the same day we took possession of our new home. My wife had been traveling for her job, so it was really cool when the truck pulled up to the house, she wasn't home, and in addition to a work in progress Fireball II, we now had a D&D and LOTR as new residents. My wife was surprised when she walked in and saw them both there.

Moving in to the new house was the worst thing that could have happened to my Fireball II project. There was a lot to do here and the machine got pushed to the back burner. Along the way, sometime in 2008, I found a NOS playfield on ebay for $600, in France. Another event occurred at roughly the same time: I was contacted by someone with an offer of a stripped down worn out FBII playfield, which was in worse condition than the one that came with the machine. The harness was, for the most part, intact. A lot of the hardware underneath the PF was in place, so now, I have a template for the PF swap when I eventually get to it, and some hard to find spare parts.

And then the game sat until the summer of 2018, when I finally got to the playfield swap. Along the way, I did mount the playfield on to the machine, but for almost ten years it sat with a nice pretty playfield, and nothing on it, top or bottom. The swap took me approximately five weeks to complete, and the troubleshooting took longer.

In March of 2020, through Pinside, I took the plunge with my first EM, and there was no way it wasn't going to be Fireball. If fortune and time favor me, I would probably consider adding a Fireball Classic, to complete the trio. This has been a fun and tremendous endeavor. We now own four machines, all in very good working condition. We finished the repaint of Fireball in early November, and I have it cleaned up to where it is playing very well.

It has been fun, and hopefully, there are a lot of years left working on, and playing, our pinball machines.

Is your Bally Fireball 2 for sale?

No, none of my games are for sale.

Based on my name you can see why I’m interested. Why not complete the set and get the home edition? They’re cheap and fun and look cute next to the big ones.

Another Fireball 2 that has given the bug :-) Nice story !

This page was printed from https://pinside.com/pinball/community/pinsiders/jlbintn/stories/a-trip-into-pinball-with-fireball-ii and we tried optimising it for printing. Some page elements may have been deliberately hidden.