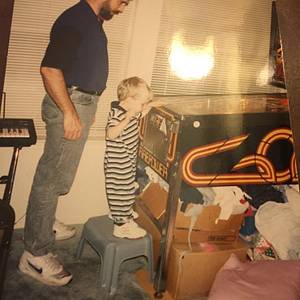 I started playing pinball, and then...

I started out playing pinball as my Dad was in the U.S. Air Force.  So naturally, I had to follow him from base to base.  Being a teenager, I hung out at the base cafeterias, the Officers Club (lucky me) and any location around the base that wasn't off limits.

Pinball was a big deal with the Airmen.  A wholesome (!) activity, which was NOT gambling for the younger adults to play while waiting for a burger or just hanging out.  I picked up on this cheap piece of entertainment, so while in Germany (near Frankfurt) I got to play all the new machines that the Air Force had contracted in for the cafes.  I certainly remember EMs in the early 1970s, but for the life of me cannot think of any specific titles that I liked.

When we came back to the US I was again at a base in New Jersey where I was able to play those new Electronic versions.  I particularly remember Buck Rogers and Sinbad because of the Blue Displays.  Being a budding electronics geek, I gravitated towards that really new technology!

Played in college because I hung out at a fraternity.  We had a connection with one of the brothers whose Uncle, Cousin, etc. provided the basement with a machine.  They were mostly EMs but still fun.  I can remember being mocked for draining the ball one time with the term "Hands of Clay."  (You know, instead of Hands of Steel!)

Didn't pick up the hobby until I was going to get a Space Invaders for my family years later.  The person had a Firepower and I thought that was the coolest idea, so the SI machine was upgraded.  I was able to "hide" it in the garage until Christmas where it was presented to the family. 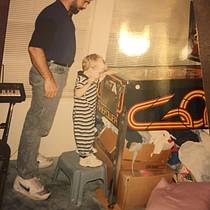 Thanks for sharing your story!

I love that photo. Dad looks like, "what have I done?" :D

Awesome story, I wonder what became of these machines. My dad told me he used to play in the service too... These things are so rooted in Americana and American history!