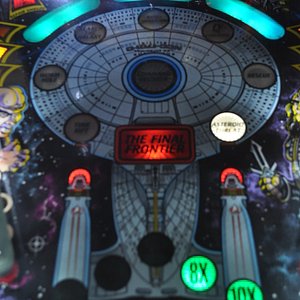 My Pin origins and 1st pin

It all started with bowling youth league at Walkersville Lanes back in the mid 90s. Just about every fall a new machine was swapped out. I remember playing games like The Machine: Bride of Pinbot, Terminator 2, Taxi and I enjoyed those games. They had Police Force for a while and I didn't care for it. I enjoyed playing those games and was hooked at an early age.

When I moved back to Idaho I was attending Boise State and regularly hung out at the games center when I was not in class and wasn't at work. In 2004 they still had a arcade which I played games like Terminator 3 and Lord of the Rings. They did have a Theater of Magic for a while and I can't remember if I played it.

Then in 2006 my Aunt got a Data East Star Wars for her birthday. It was bought a couple of months before her birthday and it was stored at my house. Since the game had a 30 day warranty from the coin operator I played it a lot. I got hooked and I should have started buying them then but I was in college and did other things.

The summer of 2012 the Star Wars pinball needed to come down to Boise for repairs and I was talking to my Aunt's SO on our way down if I was to buy one it would have to be a Star Trek TNG. I would say about two weeks later doing a delivery run for work I saw a TNG in the back of Coin Operators truck. I saw it as a sign.

I called the operator and was caught of guard of the price and started my search elsewhere. Nothing happened much and after more research and the market in general I decided the price wasn't horrible. On Jan 1st, 2013 I went to Middleton, ID to see the TNG in person on location. It was probably there since August and needed shopping badly. I decided if it was worth a look at the shop and arranged for it to be there.

When it was there I saw underneath the play field and wasn't confident in the table's condition for the price. The owner of the company wasn't going to budge claiming it was a collectors item. It was in fair condition but that machine was not in the condition to command excellent/collector's pricing. That deal fell through.

At the recommendation of a friend I put an ad out on Craigslist near the end of January. I got a response from a private owner that week and also I found another coin operator in Ontario, Oregon that would be willing to sell theirs the same week.

I took a look at the on location TNG on Friday and the private owners on Saturday before the Super Bowl. Between the 3 Star Trek TNGs I looked at the private owner's I felt was the better choice. I decided to buy it that night and picked it up the following Saturday on Feb 9th, 2013.

Will the TNG pinball be my only pin? Of course not! There are a lot of pins I would love to own and hopefully one day I will be in the position to own more of them. I'm looking to get Bride of Pinbot and or Taxi soon and would love a NIB one of these days.

love to play your TNG some time. I just ordered one and am worried about its condition.