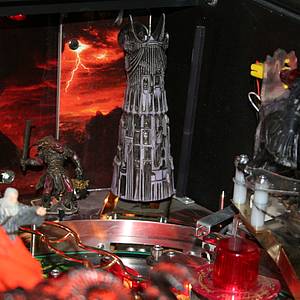 Finally got a Lord of the Rings... FINALLY!

What a long, strange trip it's been...

I first saw Lord of the Rings pinball (hereafter, LOTR) back in late 2003/early 2004, a good couple years before I bought my first pin, and as a fan of the books and the movies I was very delighted to see that it made the leap to pinball, and was a great looking game at that. I slid a couple bucks into it, thought wistfully how great it would be to own one, and that was that. I'd play it whenever I went to the movies (since pretty much every movie theatre had one, and many still do) but they were in worse and worse shape...

Well a couple years later, I bought my first pin, and then through buying and trading and whatnot got several more and was a now collector (as it were) but still had the issue that I wasn't going to spend the 3 grand plus it seemed that a nice LOTR was commanding, since they were still out on route and the ones on the market were home use games that the owners rightfully wanted good money for. I'd play my friends games, wince when I missed a couple decent deals, and life would go on.

Through the ebb and flow of collecting though, I'd ended up with several nice games, and starting to see decent LOTR games come off route I decided after Pin-A-Go-Go 2008 that I'd have a LOTR by the 2009 show. I cataloged my games and decided I'd sell two to raise the dough for a LOTR... I sold one, but the other just sat, and finally I was offered swaps for, but I just ended up keeping it. PAGG 2009 came and went, and I didn't get my LOTR... but then something happened!

One of my collector friends sent me an inquiry about my game I was selling. He wanted to make a swap, but the game he was offering wasn't to my interest. I did mention that I wanted a LOTR and that's why I was selling tho, and he told me that he had a friend who was looking to trade his off for a certain game that I had that was not exactly a keeper to me! We got in touch and a few days later he was backing up to my garage with a LOTR in the back of his truck!

It had spent some time on the route, but it had had pretty much everything rebuilt before I got it, and after going through it with a fine tooth comb and righting several small issues I put in in my lineup, where it stands today, almost 5 years later. Finally, I own my own Lord of the Rings. 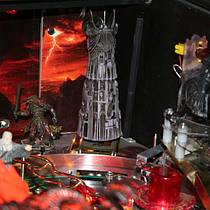 Good for you!! I just picked one up this past weekend. It is a great game! I was lucky enough to have a friend who wanted to sell his huo, mint LOTR.

hi,
here's one of the best stern, lucky U are!
If think I gonna cross the ocean and ring at your door to have a party : )
cheers