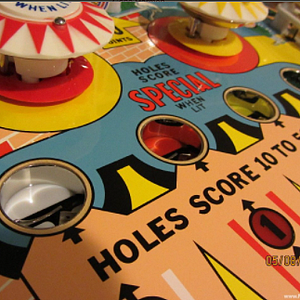 The Summer of Sing Along

I lost my place on the San Francisco Peninsula last year, and moved in with family in the East Bay. The upside to that is that it's now convenient to visit the Pacific Pinball Museum (between home and work on I-880). When the museum in Alameda, Calif., reopened in June, I bought in for one year, and declared this The Summer of Sing Along.

Pinball machines grow more sophisticated and spectacular by the hour, but I can't imagine playing any but the 1967 Gottlieb wedgehead. The gameplay is minimal: Four pop bumpers, five standup targets, two slingshots, one rollunder, and the feature that makes Sing Along special, the kickhole relay. Four kickholes correspond to four colors of targets numbered 1-4. The crux of Sing Along is notching unmade targets with each ball, growing the kickhole value (and intermittently lighting for Special after 1-4 are completed). At PPM, the first replay score is 3200, but it isn't accomplished 640-640-640-640-640; by accumulating targets (four skill shots, four outlanes, four standing, four rollovers), it's likelier 120-220-420-820-1620. Since four outlanes correspond to four '4' targets, the grail is lighting all 16, to derive maximum scoring and Special potential from the kickhole relay.

I accomplished that for the first time! but merely defied gravity long enough to make one lit Special, not even the first replay score. Pinball can be cruel (tonight, for instance, I would've sworn the outlanes had magically widened).

No toys or animations, no ramps or spinners, no end-of-ball bonuses or franchise theming, and clunky electro-mechanics. Sing Along is most basic and glorious. May this be an endless summer, continued yesterday on my 58th birthday by playing Sing Along while constrained by neither business hours (got there early) nor number of quarters in pocket (one-year membership was cheap!). 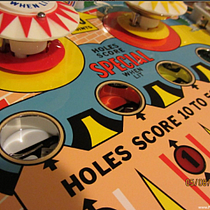 Wonderful story. I love the games with the hopping ball feature. I have a Gottlieb Paradise. Sometimes the hole progression works, sometimes not, all part of the fun.
Say hi to Michael and Melissa when you visit PPM.
Will

My #1 favorite game - the best overall pinball game ever made, in my humble opinion of course. They're not vanishingly rare, but it took me several years to find one with the right mix of condition and price. I got all 16 holes about a month after bringing it home and haven't done it again almost 2 years later. And yes, my score was under 2000 and I only got one replay. Someday I'll make it to the PPM! Thanks for the story!

Oh, forgot to mention: the more numbers made, the more the game "sings" to you as you make the kickout holes. Too fun, great integration of theme especially for an EM.

Awesome Story, and the knowledge behind Singalong! Thanks for sharing

Love the game. I open all the windows and play it after a nice cold front has passed. It’s Florida, after all, and they don’t come enough. I’m sure the neighbors can hear it. Game gets louder towards the end.

Belated Happy Birthday and thanks for sharing your nostalgia with us :).

Nice story and a great game! I played a few games on my Sing Along tonight, love that machine.

The add-a-ball version— Melody — is equally entertaining. Light all four of one color, then land in the corresponding hole to add a ball. Because you must drain a ball to make each of the “4” lights, it’s hard to rack up high scores. Everyone who plays it seems to love it.

This is the exact ad I responded to when I bought my first machine, yup Sing Along. Still my favorite too, 15 machines later.

MMMmmmmmmmm snuggle your hands around this lovely christmas themed pinball machine called sing along. Yes this lovely machine will tickle your insides with pleasure as your ball whisps it's way around the playfield. Sip hot coco as you watch your ball hop from one kickout to the next as you collect your bonus. Ahhh yes, back glass is in pretty good condition for this machine( very decent)....and as we all know these playfields for some reason get a little worn at spots. Doesn't look bad in a low lit room. I'm sure your married and know the drill ; ).( playfield has average wear for this machine) So if your interested I'll sell this machine for 600. It's what I paid for it. Pinball machine is located in basement in back room. If you come alone I'll help you. Merry Christmas ; ).