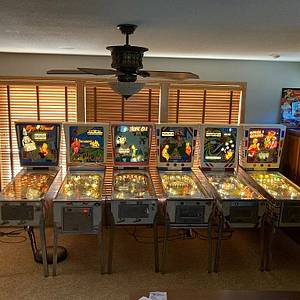 Let’s go back to the year 2007, which seems like yesterday in many ways. Probably because the gas prices are the same as today. I was still in high school and had already bought my first New in the Box pinball (LOTR). I had a small route of games. Between that and fixing pinball machines for an operator/ retailer I was trying to save money for college. But in reality I was buying more games!

As my collection grew, mom was getting more frustrated with me damaging the front entryway (closet trim, floor, screen door etc.) with all the comings and goings of pins. I was allowed to store games in the basement, and the back garage. Fortunately my father, who lived elsewhere, had just become single again. He needed to move out so he purchased a house. Now living the single life and not a lot of furniture, he was facing a decorating problem.

Around the same time my boss was heading into town with a large truck full of pinball machines and tight on space with our showroom full. It was summertime, our offseason, most of our games sold around the holiday season. So I asked my father if he wanted to babysit some pinball machines at his house as he also enjoyed playing pinball. We both said yes to the following unshopped but functioning machines which I have pictured below.

Creature from the Black Lagoon

Three other games were already there. The Getaway which we had bought back in 1999. My LOTR and Spiderman, the current machine being made by Stern at the time. What a great summer that was! Most weekends I’d stop by to grill and we’d fire up some multiplayer games. The neighbors, friends, and our lady friends at the time would stop by too. They thought we were weird/ crazy etc but we didn’t care. One year we went to Expo and Steve Ritchie signed my Getaway backglass. That was awesome!

All good things must come to an end?

As I made my way through college and started to find myself in life, things were on the move. Moving and pinballs don’t go hand in hand. Dad fell in love with a lady in the next town over. She was an artsy house decorator and landscape perfectionist so you know what that means. When he moved in with her the pinballs had to go. Pinball enthusiasm was lacking into the 2010’s and the home market was all but done. At this point I made the tough decision to sell all but one of my machines. The retail store in which I worked many hours fixing, learning, selling and operating pinball machines was cleared out, repainted, recarpeted, and….repurposed. It was a sad time for me with pinball leaving my life.

For the better part of the next decade my first love, The Getaway, followed me around wherever I moved. Every time it was set up in its new home I’d play a few games to make sure it still worked. It did. It would only be played and the glass cleaned when people came over. The playfield didn’t need to be waxed. It hardly got played. I was almost undeserving of the game.

After a couple degrees and career changes I found myself in the medical device repair business. Can you guess what got me comfortable in that position? I felt like this was the place for me. With a promising future it was time to buy a house. Like father like son, all of a sudden…..I was facing a decorating problem. Fortunately my former employer and good friend was able to rescue me.

With the same truck pictured below (this time with a pinball power cord protector used to secure a tail light) pinball was flowing once again! I had 4 machines. Not much but it was something. I wasn’t really much into pinball again but it was part of my past and I still enjoyed playing. Pinball was in the background of my life and other things were in focus. My new neighbors across the street had set me up with their cousin and she was over cooking for me most nights. I have a decent job, hours kind of stunk sometimes but you can’t complain you know?

One night I’m having dinner with her and she breaks some news to me. Something I already knew and probably needed to be confronted on. She said I never played those pinball machines and I should just get rid of them. Uh oh. Now it’s on, like you-know-what. To quote one of my online Pinside friends Little Johnny, I SAID HECK NO!!!

From that day on I took some time most days to turn a game on and play it. It was official, I was getting back into pinball. My friend who furnished some games for me was never really into electromechanicals and got a call from one of his old customers who had a Super Score and wanted to know if I was interested. I made it official and bought a pinball machine for the first time in over a decade. Then another call came in and another. Who was I to say no, the bug had bitten me once again.

Fast forward a short year and the collection has grown to 20 machines…..40…machines…..60 machines. At the time of this writing I cannot tell you the number of machines I have in my house. I would hazard a guess between high 80s and low 90s. I can tell you there are 3 sitting in my front hall closet.

(I hope you enjoyed reading this article as much as I enjoyed writing it let alone living it out. Pinball has been such a crazy ride for most of my life. I have so many stories I’d like to share with you all sometime. I feel very fortunate to have experienced so much in pinball and look forward to what the future has. Today I’ve made more friends in the name of pinball than I ever thought possible. You know who you are) 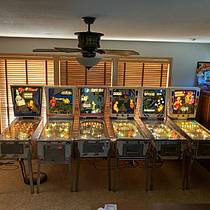 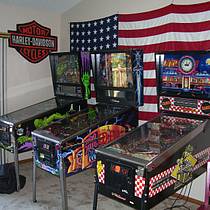 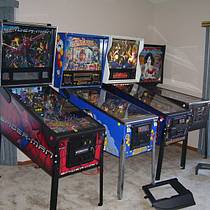 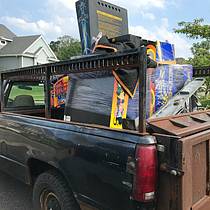 Are you married! LOL

Great story EJS! Thanks for taking the time to write it up and share it.

Interesting story, thanks for sharing!

Wow, what a cool story! That's a great lineup of Gottlieb wedgeheads.

I love it. Thanks for the great story and looking forward to hearing some more if you get inspired.

Great story, cool that you and your dad made some memories along the way.

yer row of wedgeheads looks like it sorely needs to shift to the left. Players like me have such fancy footwork I'm liable to hurt my feet on the fireplace!