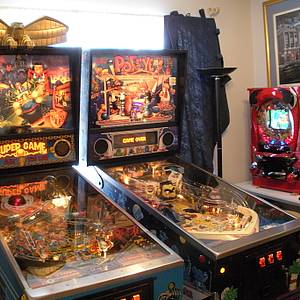 My pinball collecting hobby began about 14 years ago while renting a big house with three of my friends. My first game was a Tommy that I paid around 900 dollars for from an arcade. That's pretty funny... Arcades no longer exist in most places.

After seeking more pinball challanges I picked up a nice Star Trek TNG. My friend tried to compete with me and purchased a Funhouse, and soon after that a Roadshow. I answered back with a Twilight Zone, and the rest is history!!

Soon I began to miss having pinball in my condo, so I purchased a few Pachinko machines because they don't take up much space. Shorty after that I entered a contest with Sirius Satellite radio for a Tommy pinball autographed be Pete Townshend, and WON. Pretty amazing considering that my name was drawn out of approximately 11,000 sweepstakes entries. Perhaps it was fate to stick with pinball! Now I have three pinball machines and two pachinko machines cramped in my spare bedroom. The craze continues!!! 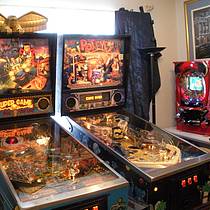 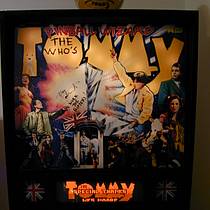 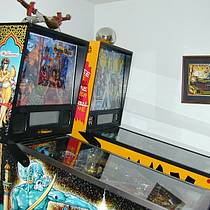 always wonder who wins contest you never hear about them,
but thats great man you won a pinball machine,
was it a good machine from the start or did you have to fix it up a bit after you got it?

It was nice to win, but the machine was far from perfect. It was missing the blinder and had no silver ball topper. I needed to replace many worn parts and plastics. BMI pinball was the company who shipped the machine. The best thing about the machine was the autographed backglass. I ended up selling it. They claimed that the machine was worth 3500 bucks for tax purposes, but fair market value is more like 2000 at best.

That's cool that you actually won something, and a pinball at that!!!. I can't even win 5 bucks on the lotto!

Great score! I wish I coule win one, even one in bad shape.

Wow, that would be a an awesome prize to win!