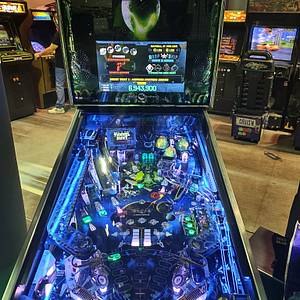 I started playing pinballs, as many have, in local arcades. The main ones (possibly the ONLY ones) near me were at a dollar movie theatre and in a mall. They certainly weren't impressive, but coming from a struggling single-parent household, I was lucky to get to go anywhere. I did build a love for arcades and pinball machines, and I have very fond memories of playing The Addams family and Twilight Zone.

I have always been a gamer. Video games, arcades, board games, cards, pool, darts...you name it. I have always enjoyed passing time alone honing my gaming skills (I had plenty of alone time growing up in my household), and meeting up with others for games and activities as well. As such, I have always wanted a game room. You could say it was a bucket list item. [See what I did there? The title...] Well, life kind of came at me fast. I am in a business that kind-of chose me, instead of the other way around, and it doesn't have a lot of guarantees when it comes to money...or even having much stability. I didn't play too much pinball during this time, but the hope of a gameroom was always there. I got married and we had 3 kids (and you think pinballs are expensive? HA!). At this point, I was doing well to just pay the rent.

After what seemed like a lifetime of struggling, we finally realized our dream (another bucket list item) of buying our first home. Well guess what? It has 2 gamerooms!! I'm not saying that was the reason we bought it........well, let's get real. It didn't hurt.....O.K. it was a major selling point, alright? Don't judge me. Lol.

I've had arcades in the past (and i still do), but they weren't nearly as intimidating as pinballs...and moving frequently would have made it a pain as well, but now I had a gameroom. 2 of them! I set out to save, and I finally bought my first pin. It was not a high-end machine, but it did have a theme I liked, I enjoyed playing it, and...most important...I could afford it.

I had a resurgence in pinball mania. Pinballia? Pinballitis? I don't know what it's called...but i got bit by the bug. Hard. I'm not a wealthy guy by a long shot, but I did my best to procure some games and play as many as possible. I am fortunate that I live in a large metropolitan area with TONS of places to play. Arcades, barcades, pinball bars, etc. are aplenty. I have played approx 90% of pinside's top 100 machines, not to mention many others. I have since been building my pin collection and repairing/selling pins as well.

My kids are loving it all, and my wife is even really getting into pinball...except the prices. She thinks they cost WAYYYY too much. Well, to each their own. I just need to find my next pin... 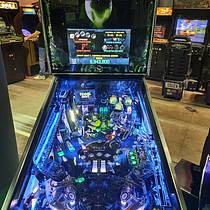 Congratulations! My tip is learn to work on them if you currently don't know how.

Hook is a great game, a lot of people don’t like it because of the challenge. I was lucky enough to meet everyone involved who made the machine come to life on my trips to Chicago. I had them all sign my back glass. I’ve had around 10 machines and now I’m down to 2. Hook has always been in my collection.

Congrats and welcome to Pinball Fever!

I have built up a fairly nice lineup. Bally Paragon, Stern Meteor, JJP WOZ, LOTR, Data East JP, and LAH. I am planning on shaking 1 or 2 of these up soon, but I am happy where it is headed.
I like a good variety of pins, as my collection shows. It is probably a good thing that I don't have space for more!

Great story! I can relate. Never overpay. I always try to leave a little meat on the bone, just for down the road when you want to sell and upgrade. Doing your own repairs and maintenance is a big help. Good luck

Cool story
Sounds similar to my childhood...we were dirt poor, lived in a karman ghia for a while...so I started hustling used NES cartridges and gpk cards to my friends...by the time I was 12 years old I had $1500 in a box under my bed and bought my first car when I was 13

My mom said I couldn’t drive it until I was 16, but I would just take it out when she was at work and head up to the local bowling alley or pool hall to play pinball and wreck fools on street fighter

Nobody ever believes this story...but it’s true