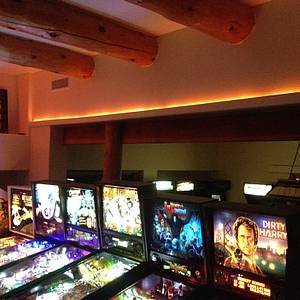 What was originally intended to be a pin or two to compliment our home arcade, is slowly turning int

I grew up going to arcades and bowling alleys, however was always more interested in video games. My parrents were involved in a bowling leage for years when I was younger. Rather than hiring a babysitter they would take us to the bowling alley and give us quarters to hang out in the arcade. We own a number of vintage arcade game and when we finally bought a house that had a descent space for a game room, I decided I wanted to acquire a couple of pinball machines. At that time I wasnt really sure what I was getting myself into and how much I would really take to pinball. I was thinking more along the lines tht it would be kind of novel to have a pinball machine and had no idea what I was getting myself into. What was originally intended to be a pin or two to compliment our arcade, is slowly turning into an arcade that is being taken over by pinball machines. It was kind of by chance that I even got into this hobby. Originally I was just going to buy some random pin to put in the game room with no particular title in mind. What went from intending to buy one pin quickly turned into me buying two. Fortunately the firsts pins I bought was a nice example of Creature from the Black Lagoon and Guns n Roses. The person who sold it to me was very patient and understanding of my newness and lack of knowlege. I got a couple of good ones from the get go and after playing them for a while that just wasnt enough and wanted more. I wont claim that I know that much about fixing things, but im learing as I go along and having a lot of fun doing it. Im finding that part of the hobby extremely gratifying. Between forums and videos im learning stuff all the time and really enjoying myself. 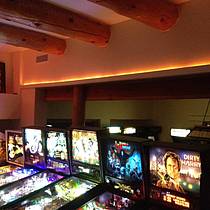