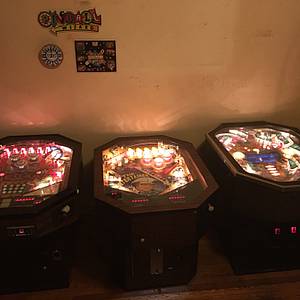 It started at a tender young age ...

I grew up in the projects, outside of Coney Island. There was a luncheonette, an ice cream parlor and a pizzeria all acrross the street from my building.  What did these 3 establishments have in common?  Why pinball, of course!  It started in the early 70's, when I was old enough that my mother would send me to the store by myself.

And there they were; these glorious lit up, huge mechanical machines with shiny balls and bells. All it took was a quarter to play. At that time, a quarter was a lot of money. I'd go to the store for a pack of cigarettes that cost 35 cents. "Mom wont get mad if I use a quarter out of the change", I thought to my self.  And she didn't get mad at that.

What she did get mad at was that I took over an hour to get back with her cigarettes.  Many a time she'd come looking for me, and she knew exactly where to look.  I've gotten a few thrashings in front of my friends - something she seemd to get pleasure out of doing: embarrasing me in front of my friends.

But I didn't care.  I spent all my free time with my friends in those stores, playing those games.  My passion for pinball kept me and my friends out of trouble, except with my mother, of course.  I've spent many an hour playing pinball, most of the machines I do not remember, but a few stand out: Ship Ahoy, Charlies Angels and Buck Rogers come to mind.  I saw my way through the transition from EM to SS. I preferred the EM machines because I liked the chimes. The early SS games were just a bunch of beeps, not a very inviting sound.

We had a deal with the young ladies who owned the ice cream shop.  We would run errands for them, and they would give us quarters to play the machines.  We would play all day on just a couple of quarters.

But then, something happened in the late 70's - video game machines.  Frankly, I suck at video games - I always have and always will.  I didn't like them, but all the pinballs were gone and replaced with these upright cabinets with video screens.  The only game that caught my fancy was "Crazy Climber".  I had sores in between my fingers form playing that game.  But it just wasn't the same.

I grew up and moved away and hadn't thought about pinball in quite a while.  It wasn't until about 30 years later, when I discovered eBay, that the bug hit me again. I saw a toy for sale - Tomy's Astro Shooter.  I bought one, then two, then three.  That satisfied my pinball craving, but only for a little while.  I wanted a REAL pinball machine. My dilemma, however, kept me from obtaining my desire.

That dillemma: I lived in a small 1 bedroom cluttered apartment. However, I was determined to get a pinball machine one way or the other.  Then I got BED BUGS!  What a nightmare, but also maybe a blessing in disguise.  Because of that situation, I was forced to declutter and get rid of almost everything. With thorough cleaning, disposal of most of my stuff, and the help of hired professionals the problem was cleared up. Now I was living in an uncluttered apartment, but it was still small.

Then I discovered cocktaill pinballs - something I hadn't heard about previously.  I saw a Roy Clark for sale on ebay and figured, "Why Not"? I knew I would be able to make room for that machine. I won that auction and got the machine a couple of weeks later.  I was HAPPY - at last I owned a real pinball machine. The game is fun to me, because it's simple. I don't like the overly complicated, complex machines of later years.

Then I saw another cocktail on Ebay - Game Plan's "Vegas".  Oh, it looked so pretty!  I wanted it. I was in a bidding frenzy, but I was going to get that machine no matter what it cost. Well, I did win and was now looking for a way to rearrange the bedroom to fit it in. That was easy - i made room for it. Now I had TWO pinballs.

Then, I saw a "Night Moves" for sale. No auction, just a straight no nonsese "Buy It Now" item.  I contacted the seller, asked for a video, which he made for me and sent it. I bought that one - and he personally delivered it to me.  But now, I had to get creative with my rearranging skills.  I figured it out, and made the room for my third machine.

So now, my cravings are satsfied, and I have to be happy with what I've got now, because I really have no more room for another one. I say that now ...

UPDATE:  OK, "NOW" didn't last for very long.  I bought another Pin, Bally SilverBall Mania.  I guess I should just say, "To Be Contnued" ...

UPDATE 2:  I'm now up to 5 machines - awaiting delivery of a Xenon. Who in their right mind crams 5 pinball machines into a 1 bedroom apartment? 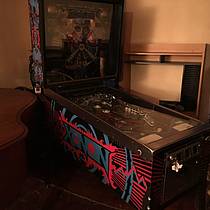 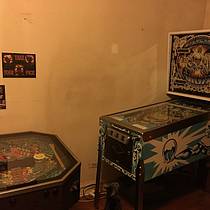 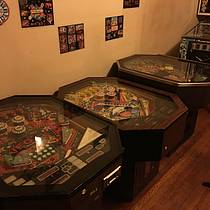 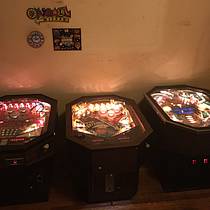 Thanks. Night Moves is a lot of fun. I wish I would have gotten that one first. The others, Roy Clark and Vegas, are awful. I used to Love Vegas, but after playing Night Moves and now my Silverball Mania, Vegas is so slow and the flippers are terribly weak.