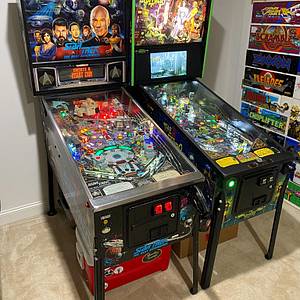 As long as I can remember, I was always fascinated by pinball machines. I wanted to like them, so I'd drop a few quarters into a machine whenever I saw one, but it just never really clicked for me. I wasn't quite sure what I was doing, and never had anyone to show me the ropes, so I'd just flip the ball back up whenever it came down and hoped something interesting would happen... and then moved on to whatever video games caught my eye at the arcade.

Growing up, the only "pinball" experience that really kept my attention was the Sonic Spinball video game for the Sega Genesis. I remember having a lot of fun playing that, and I guess it was kind of pinball, but that's about it. About a year ago, I played the demo for Yoku's Island Express on the Nintendo Switch, and liked it so much that I ended up picking up & playing through the full version. That game is also pinball-like, in that it mixes pinball physics with platforming mechanics in a charming adventure game. Then, in September, I found myself at the Providence, RI airport with my 7-year-old son and some time to kill. After grabbing a bite to eat, we hit the arcade game room at the terminal. I played all of the pins there... Star Wars, Aerosmith... but as soon as I played The Munsters for the first time, something immediately clicked with me. I felt like I actually knew what I was supposed to do, and goals I was prompted to hit were actually achievable. I'm sure the LCD screen helped, big time. My son was totally enamored by it too, so much so that he kept asking me to watch old YouTube clips of The Munsters classic TV show at the hotel all weekend.

For weeks afterwards, he kept asking me about it, wanting to play it again and wondering if people could buy pinball machines to play at home. After collecting console games for over 15 years, I had started building a modest home arcade last year. First came Centipede, followed Donkey Kong Junior, then a handful of others, and it seemed like a natural thing to add a pin to round things out. I knew The Munsters had a mixed reputation, but it was fun to me and my son, and the first pinball game that truly clicked with me after playing them off-and-on for 30+ years. After that, other pinball machines in general starting making a lot more sense to me -- the mechanics, the objectives, the little tricks here & there -- but I couldn't stop thinking about The Munsters, so I made the decision to add one to the home game room.

The machine I played at the airport was a Pro model, and I later learned that there were also Premium and Limited Edition models featuring lower playfields. I was intrigued by this, so my son and I ventured down to GKG Amusements at the Valley Mall about 90 minutes from home to try out a Premium model. I didn't love the feel of the lower playfield, as it reminded me of cheap plastic tabletop pinball toys of my childhood, and figured the novelty definitely wasn't worth the additional cost for the Premium model, so I settled on picking up a Pro.

After speaking with numerous dealers around the country, I found a great deal close to home (if you're reading this -- thanks!), and took possession of my machine just before Halloween last year (perfect timing!). It was an instant hit at home, and between me and my 3 oldest kids (ages 7, 5, and 3 -- the baby can't play yet), we've put hundreds and hundreds of games onto the machine already and look forward to many more. I know it's not perfect, but to me, The Munsters is very enjoyable, approachable, and hasn't gotten old yet.

But I also know it won't be the last pin in my home arcade. I'm a big Star Trek fan, especially The Next Generation and Deep Space Nine, and I'm thinking a nice Star Trek: The Next Generation pin would make a terrific centerpiece for my game room. So, please let me know if you have one for sale!

Quick update: my fledgling pinball collection has now doubled in size to two machines! I just added a photo to this post showing my new-to-me STTNG at home next to The Munsters. This could get addicting... 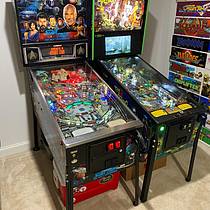 Great story! The Munsters gets a lot of flak on Pinside, but I think it has quite a bit to recommend it. It's awesome that it resonated with you and brought you into the hobby. STTNG is one of my favorite pins; I hope you land a nice one.

It's wild just how similar our pinball beginnings are. I couldn't figure it out at all in arcades. I used to play Thunderball on the Odyssey 2 and later I played the Williams Collection PHoF on the Wii. That's how I learned about the rules. On top of video pinball reintroducing me to the real thing, I accidentally found that arcade at the Providence airport and spent a good amount of time on that Aerosmith. I had a very long game going when my daughter came to tell me we were about to start boarding. I had to leave the machine mid-game.
Thanks for the intro!

Great story. Never be shameful about buying any pinball

Just got a Munsters last week. I got the premium version. I’m with you - I love the versatility where it’s simple enough for my 7 year old but definitely deep enough for me. We are having a blast with it and it’s something my whole family enjoys.

I see your point with the lower play field but I have to admit I love it at the same time. Fun way to rack up some added jackpot points.

I like the Munsters pinball, and the show is great too. Frankenstein marries a vampire and has a kid who's a werewolf! lol.

Sonic Spinball is a fantastic Genesis game! Huge video game collector, and I was also quite happy to expand my repertoire by having a real live pinball machine. Congrats on the pin!

Great read. Glad to hear some love for Munsters! I dont understand the hate!

I have a very similar story but it involves a ghostbusters machine. I love reading the origin stories more than anything. Thank you for writing that and sharing your experience!

I also enjoy Munsters. Neat game. Hope to fly through Providence one day--sounds like a great airport!

Welcome to pinball! Like wine, the only thing that matters is whether you enjoy it. Don’t be apologetic. The art on Munsters is gorgeous and obviously it plays well for new players.

When covid is over look at the ifpa and try out a local tournament, they’re lots of fun and you’ll meet other collectors.

I really enjoy the last Star Trek by Stern great flow and shots on the 3 flipper pin. Might be a good one for you.